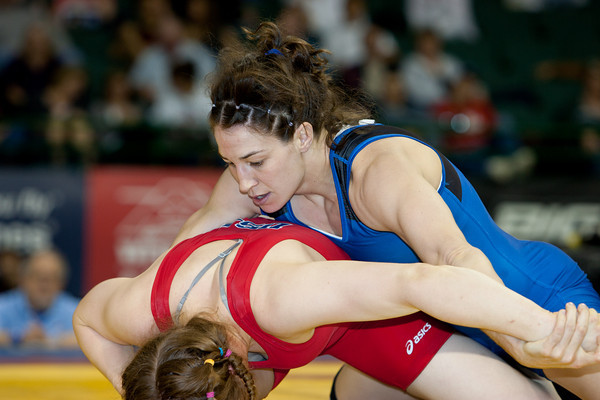 Sara McMann (US), Olympic silver medalist in the 2004 Olympics

Wrestling is a competitive event where the wrestlers test their strength and skills to beat the opponent. It is all about being in dominating position, putting the opponents in a submission and making them hapless. Wrestling is an art which needs muscular strength and stamina and with its dynamic techniques of takedowns, throws, pins, joint locks, and grappling holds, the contests becomes absorbing and entertaining to watch. There are different styles of wrestling which are practiced and each style has its own technique and set of rules. Owing to its effectiveness, wrestling has made its influence on other martial arts and military combats as well. Wrestling is one of the most popular combat sports in the world and probably the oldest one as well.

Wrestling was not born with a name like many other combat art and, in fact, in ancient English it was written as ‘wraestlunge’ or ‘wraestlian’, which is translated as ‘to wrest’. Hence, it seems the word wrestling was influenced by the ancient words.

There are many incidences inscribed in history which throw light on ancient practices of Wrestling. There are indicators like the cave drawings in France which trace the history of wrestling back to 15,000 years ago. Then there are reliefs found in Egypt and Babylonia dating back to 3000 BCE which depict some sort of holds which are common even today in the world of wrestling.

Wrestling also found place in the ancient religious scripts of Indian culture dating back of 1500 BCE. Moreover, records dating back to 700 BCE and 1st century BDE have been recovered in China and Japan respectively. Then the craze of wrestling seems to have swept the ancient Greeks, evidences of which can be found on countless Greek coins, vases and other ancient artefacts which depict wrestling contests in some form or other. Then, owing to its popularity, it also found a place in Greek Olympic Games of 776 BCE.

In present times, Wrestling still has not lost its shine and is promoted through competitive sporting events which are organized all over the world. Though recently some voices were raised wishing it out of the Olympics Games, but the popularity of the sport saw the game through the crisis and Wrestling was voted in. At the 2012 London Games as many as 71 countries participated in the Wrestling competition and 29 countries qualified for the medals. Presently the sport manifests itself in different forms oil wrestling, folk wrestling and collegiate wrestling which is famous in US high schools and colleges.

Professional wrestling is another form of this combat sport, but it is quite in contrast with amateur wrestling. Professional wrestling events are more about entertainment and they are staged performances rather than real combats. The fights have theatricals, but they are still the delight of the crowd and during the contest, ‘cheers and boos’ echo in the arena as the athletes appear and fight. WWE is one such organization which regulates professional wrestling, and it builds up tempo for promotion of the matches.

For a combat sport as old as Wrestling, its only normal to find it mentioned in ancient literature and epics. One such is the Sumerian literature, the Epic of Gilgamesh, which introduces to the story of Gilgamesh who established himself as a leader when he defeated Enkidu in a wrestling match.

Wrestling was also mentioned in Hebrew Book of Genesis (32:22-32), which tells the story of the patriarch Jacob and the Angel wrestling with each other, thus Jacob got nicknamed ‘Israel’, which also means ‘wrestles or strives with God’.

Then the epic Mahabharata, which is written in ancient Indian script Sanskrit, narrates the wrestling combat of renowned wrestlers Bhima and Jarasandha, who grasp each other with their arms. It states that they fought intensely, and they became extremely violent as they tried to cripple each others’ innermost nerves by banging the opponent’s chest with clenched fists.

The combat helps the practitioners gain physical strength and upgrades their athletic skills. It has been used to prove ones superiority over others. The sport also works for developing the mental self as wrestlers become mentally strong and calculative as they look for opportunities to ground their opponents. An ideal wrestler also exhibits ethics and is a person with honour. Apart from physical, mental, and spiritual development, Wrestling was also used to promote friendship. And it is said that this is the reason behind its first introduction by the Greeks – it was seen as an alternate to bloodshed in conflicts among warring nations and kingdoms.

To begin the bout, wrestlers start in a standing position over a mat and then go for the holds. There is a referee who conducts the affair and uses hand signals to award the points for the manoeuvres which lead to the touch-fall. If by the end of the match no falls occur, the points are added to declare the winner.

The freestyle wrestling has found its way to the Olympics arena where men and women compete to test their skills. The style is all about throws and pins over the mat and it allows the use of kicks for offence and defence.

Greco-Roman is another popular style of wrestling, and is an Olympic Games event as well. This style prohibits kicks and holding of opponents below the belt. It gives weight to high amplitude throws and pins on the mat are one of the ways to win.