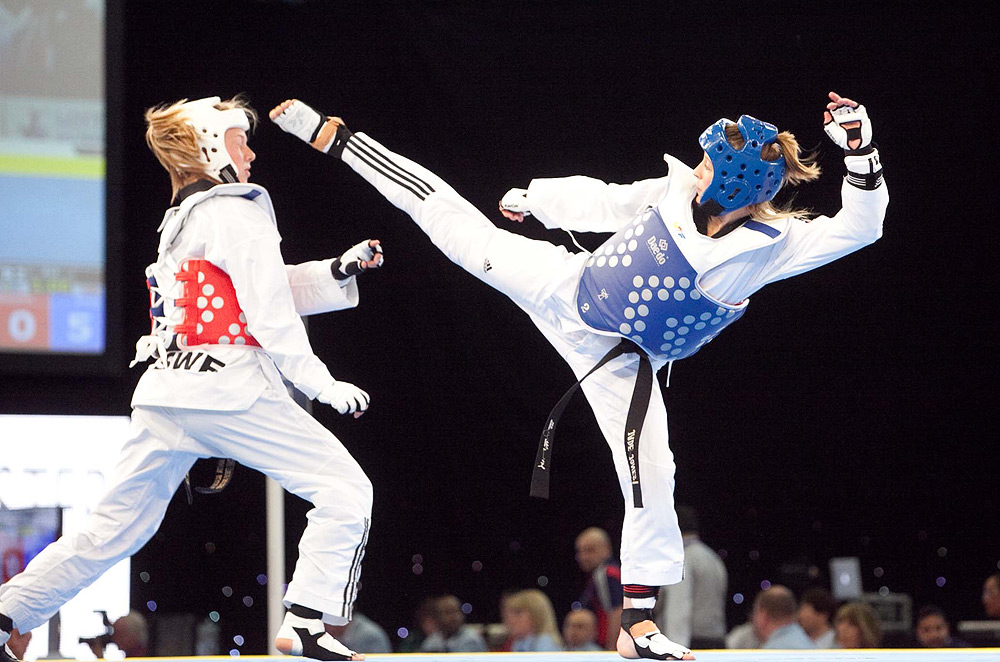 Taekwondo is a dynamic martial art dense with scientific fighting techniques. Taekwondo, a product of Korea, has its roots deep in the culture and tradition of the county's society. The need of the hour for self defence against animals and the warring tribes, made Taekwondo an alternative to look upon for self defence. In the 1940s, masters in Korea blended the different fight forms like 'Taekkyeon', ‘Okinawan Karate’ and others and created a single effective fighting system. Taekwondo is referred to as the martial art which flourished around 1950s and 1960s within the South Korean military and other civilian organizations, including universities, and schools.

It is believed that Taekwondo owes it naming to Choi Hong Hi. Though the word is written in different ways, like ‘taekwon-do’, ‘tae kwon-do’, or ‘tae kwon do’, its meaning still remains the same:

Hence putting together it would sum up as ‘the way of the foot and hand’, or simply ways to use your hands and feet.

Taekwondo is said to have evolved from the fighting techniques which prevailed about 5000 years ago. These were unarmed combat styles which were practiced in the warring kingdoms of Goguryeo, Baekje, and Silla, and young men were drawn towards these arts which required strength, survival instincts and speed. Then later, Hwarang warriors took up the expansion work of Taekkyeon as they travelled throughout the Korean peninsula to learn more about the regional people, and ended up sharing their knowledge.

Though the rich ancient Korea martial art is seeped deep in Korean history, it fell from glory at the later period of Joseon Dynasty. Kings preferred scholars more than warriors, thus the martial arts of Subak and Taekkyeon were left for military uses only and became formal part of military martial art training. However, in the 19th century Taekkyeon was still among the crowds, but in form of a folk game practiced during the May-Dano festival.

Then, when in 1945 when Korea got liberated from Japanese occupation, Korean martial arts school began to crop up, and by mid 1950s the unification of 9 different kwans was carried out to bring them under one system named ‘Taekwondo’, which was accepted on April 11, 1955.

Taekwondo has become a very popular martial art, it has reached all corners of the globe, and much of the credit goes to the associations like the International Taekwon-Do Federation and World Taekwondo Federation. Taekwondo was held as an exhibition event at 1988 Summer Olympic Games in Seoul, and eventually turned into a medal event at the 2000 Games in Sydney. It is one of the two Asian martial arts which have found a place under the banner of Olympic Games. Owing to its popularity, Taekwondo was also accepted by Commonwealth Games game in 2010.

It is estimated that Taekwondo is practiced in over 123 countries of the world and that more than 30 million people around the world have adopted it. However, the South Korean government tells a different story, and claims that over 70 million people have picked up this art, practicing it in over 190 countries.

In the ancient kingdoms of Goguryeo, Baekje, and Silla, the popular martial art techniques which were later incorporated in Taekwondo, were ‘Ssireum’, and ‘Subak’, and Taekkyeon was a distinctive part of ‘Subak’. The northern kingdom of Goguryeo was the most popular one, and it flourished till the 6th century. But after the fall of Goguryeo Dynasty, the Silla Kingdom was rendered helpless against the pirate invasions, and they requested help. Hence, the early masters of Goguryeo took up to train few selected Silla warriors in the art of Taekkyeon. These warriors later were branded as Hwarang. They set up a training academy named Hwarang-do which was meant for the younger generation of the royal families in Silla. Along with the combative skills, the trainees were also prescribed codes of human conduct and principles which they had to incorporate in their lives.

It is said that around 1952, there were many exhibitions where the practitioners displayed their powers. In one such display, Nam Tae Hi cracked 13 roof tiles with one punch, which prompted the South Korean President, Syngman Rhee, to introduce the martial art in the Korean army.

Ideal for developing the striking ability of a fighter, improving uppercuts, angled strikes and technical movements.

V-neck opening allowing the top to slip over the head easily. Black with contrast colour stripes and neck trim. Polycotton. 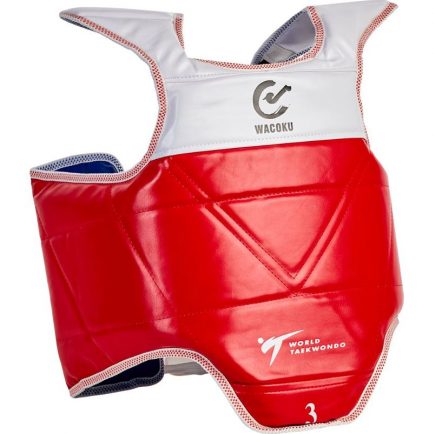 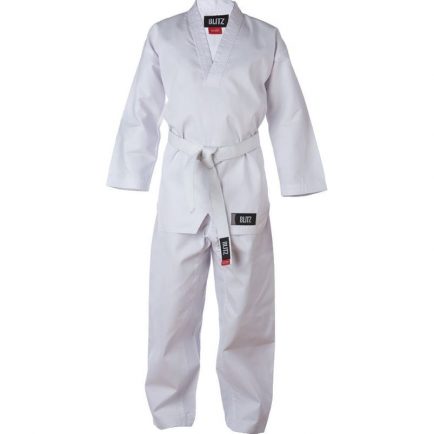 The philosophical aspect of Taekwondo includes much more than mere physical fights. It tends to train the mental self and develop self-restraint, humility and kindness among the people. Yes, the physical part is also present, and it makes people deadly weapons that can kill instantly with their bare hands and feet. However, this is an art which tends to develop well defined coordinated body movements, better body balance and agility.

The rules of the game are simple – landing as many blows and kicks on the opponent, but only on the allowed area. The contest ideally consists of 3 rounds of 2 minutes duration each, and one minute of break in between rounds. The winner can be decided by points, knockouts or disqualifications. There is a referee who conducts the bout, as well as 3 judges who lookout for points – but consent of at least 2 judges is required for a point to be recorded. One point is awarded to any legitimate strike, but a kick to the face calls for 2 points, and an additional point is added for a knockout.

The practitioners of Taekwondo are expected to wear a uniform ‘dobok’, which is usually white, though black or other colors are also sometimes worn, and a belt called ‘ddi’ is tied around the waist. There are typically 3 styles of dobok, the cross-over front jacket, the V-necked jacket with no crossover which is worn by WTF practitioners, and the closed front jacket with no crossover which is worn by ITF practitioners. Then there are colored belts, and other insignias which indicate the ranking of the student. Generally, a darker belt indicates a higher rank.