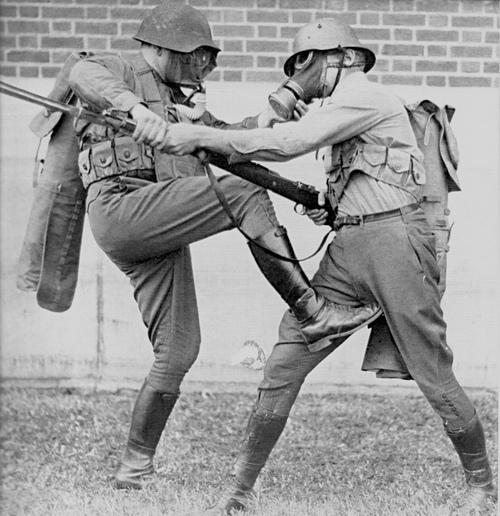 Two US soldiers training in Hand-to-Hand Combat during WW1. This photo along with many other First World War related pictures were censored and banned from publication in the United States. Photo Source: Absurddonio

Hand-to-hand combat is a confrontation between two or more combatants fighting at a very short distance. It might involve the use of weapons, but it mostly refers to unarmed combat. The term is often used to describe the fighting style used in the military, but it is a style that is based on a variety of martial art disciplines. Hand-to-Hand combat, as it is taught in the military, is credited to William Ewart Fairbairn, who developed his techniques based on a loose interpretation of Chinese and Japanese martial art styles. This is why hand-to-hand combat is often a generic term used to describe any fighting style that involves close-quarter fighting.

Hand-to-hand combat is a common fighting style that goes back to ancient cultures. There are different stories about the origins of the fighting in each culture. The tactics of hand-to-hand combat have also been the base of many other varieties of martial arts like Wrestling and Boxing. Hand-to-hand combat was featured in gladiator matches in ancient Rome and in medieval sports like jousting. As early as 1022 BCE, Chinese soldiers of the Zhou Dynasty were trained in close quarter unarmed combat.

Hand-to-hand fighting methods were largely employed in military training in trench wars and only started to decline after the second world war when rifles no longer had bayonet lugs. The close quarter, hand-to-hand combat of World War II soldiers was codified by William Ewart Fairbairn and Eric Anthony Sykes, who learned it while working in the Municipal Police of the International Settlement of Shanghai in the 1920s. His system, which he called Defendu, was the result of a few elements of Japanese and Chinese martial arts, but unlike most eastern martial arts it could be learned very quickly. Fairbain went on to teach the British Special Operations personnel and it became a standard combat training method. During the war, training was provided to British Commandos, the OSS, the Devil's Brigade Marine Raiders and U.S. Army Rangers.

While close combat or hand-to-hand fighting was being introduced in the British and American armies, other hand-to-hand combat systems were being introduced in other countries all over the world. There is European Unifigh, Israeli Krav Maga and Kapap, Russian Sambo and Rukopaschnij Boj. The styles have evolved. It continues to be taught to elite military units, especially after the Vietnam war.

The U.S. Army in particular is fond of hand-to-hand combat training. They even turned it into a competitive sport between members of different platoons and different sections of the army. In 2002, they officially adopted the Modern Army Combatives hand-to-hand combat training program and established the US Army Combatives School at Ft Benning, Georgia.

The US Air Force adopted the same combat system in 2008 while the Marines Corps embraced the Marine Corps Martial Arts Program (MCMAP). The MCMAP has a belt-ranking system used to show skill level and experience. Levels like tan, gray and black are similar to many Asian martial arts.

Modern day Karate is thought to have been influenced by the ancient Okinawan unarmed combat style called ti/te which means “hand.” When bans on the carrying of arms were instituted in Japan during the late 1400s, they led to the underground development of martial art forms like “Jujutsu”.

There are a couple of legends surrounding hand-to-hand combat. They date back to ancient times and involve notable figures like gods and noble warriors. There are legendary battles that were won by close combat, like the first Anglo Zulu war “The Battle of Isandlwana” where the Zulus won in hand-to-hand combat.

There is no real philosophy for hand-to-hand combat. There are different fighting styles that are essentially hand-to-hand combat, from Boxing to Wrestling and martial arts disciplines like Jujutsu. For instance, The U.S Marine Corps Martial Arts Program (MCMAP) draws influences from Brazilian Jiu-jitsu, Sambo, Krav Maga, Aikido, Muay Thai, Wrestling, Boxing, Eskrima, Taekwondo, Hapkido, and Kickboxing. The techniques used by MCMAP suggests there is a philosophy that ties all the styles together.

In any fighting style that is practiced as a sport, there are rules of engagement.

Other styles, like Savate, appear in comic books and are practiced by manga characters. It has made its way into cult movies like The Matrix where it is mentioned as one of the many martial arts that are programmed into Neo.

When it comes to army style of hand-to-hand combat, there is an abundance of movies, video games and music videos that feature comic book soldiers like Captain America . There is also an endless list movies about armies and wars.