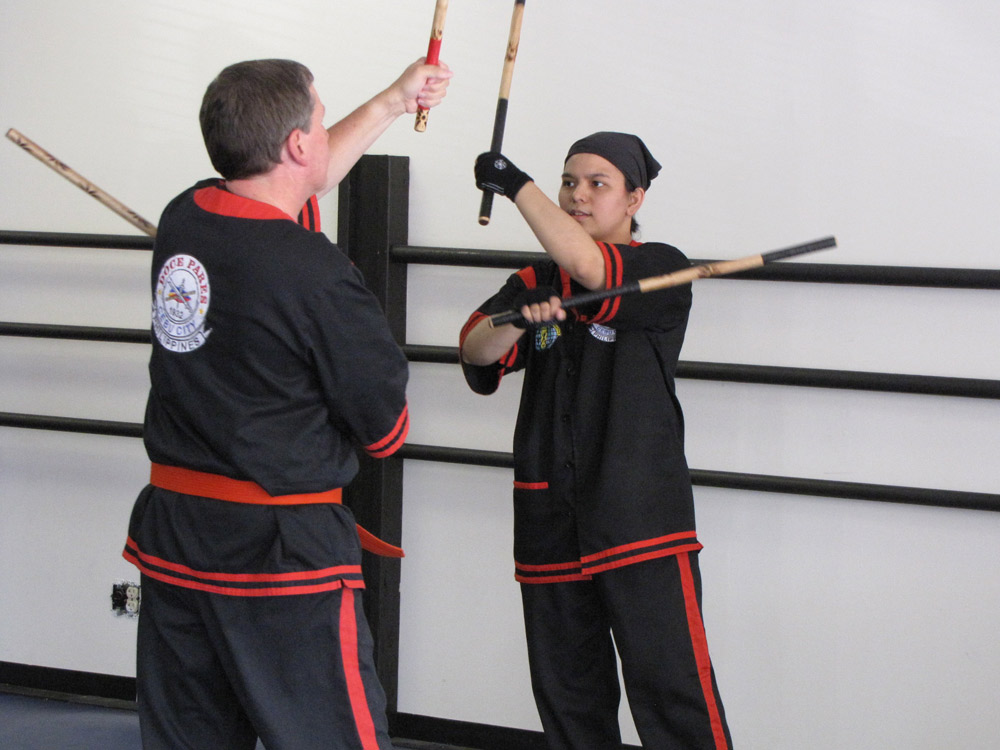 Eskrima is a martial art which originated from Philippines and is known for its effectiveness and elaborate techniques. It is mainly weapon-based and famous for the fact that practitioners start using weapons as soon as they start practicing. Apart from a range of weapons, Eskrima includes kicking, punching, wrestling, grappling and some elements of groundfighting. Depending on the region, it is also called Arnis and Kali. With small variations, these three techniques comprise the FMA, Filipino Martial Arts system. Philosophy of Eskrima emphasizes the importance of flexibility and fighters are therefore trained to conquer any kind of situation, whether they are required to fight with weapons or without them.

Eskrima can also be spelled Escrima and is, in fact, a Filipisation of the Spanish word “esgrima”, meaning fencing. Techniques of Filipino martial arts are often called Arnis and Kali as well. Arnis comes from the word “arnes” which is Old Spanish for armour. Origins of the term Kali are not as clear and many different theories try to explain its meaning. In Ilocano dialect, “kali” means to dig and to stab, although some think that the word may have come from “tjakalele”, a tribal fencing style from Indonesia, or even from a combination of two Tagalog words, “kamot” meaning hand and “lihok”, meaning motion.

There are not many conclusive written records on the origins of Eskrima, but many state that this martial arts system has been around for a long time. The sole history of Philippines is considered to be a long one, stretching back to 900 AD. Martial arts have always been an integral part of the Filipino Society and some records state that the Kris, a wavy bladed knife originating from Java, was the first weapon used in Filipino fighting arts in 200 B.C. Efficiency of traditional Filipino martial arts was proven in the 16th century, when men of Ferdinand Magellan were easily defeated by men of Raja LapuLapu. However, Spanish came to rule over the Philippines until 1898 and made a huge influence on the local culture. Spanish fencing has had an enormous impact on the traditional martial arts, hence the name of Eskrima.

Spanish fencing brought many new elements to traditional fighting styles, including the introduction of different angles of attack and the use of sword and dagger. Native residents were forced to substitute their traditional weapons and swords with rattan weapons when the Spanish imposed a ban of the practice of all native fighting arts. Although the rattan was used in the same manner as a sword in the beginning, through time fighters began to discover different handling qualities of the stick. They began developing new techniques which used sticks and knives in a new way, including blocking, parrying, checking, thrusting and slashing.(1) Later, Americans have been exposed to Eskrima during the Philippine-American War where Filipino fighters often fought even bare handed. It is also known that guerrilla Filipinos often fought Japanese hand to hand with their blades during the World War II.

Arnis and Eskrima are used to refer to Philippines’ martial arts today. Together with the term Kali, they refer to a wide range of open hand and weapon techniques. This martial arts system was proclaimed the official National Martial Art and Sport of the Philippines in 2010 and since then has gained much recognition. Two main types of Eskrima are practiced during sports events. The most common system is the WEKAF (World Eskrima Kali Arnis Federation) which was established in 1989. The other system is known as ARPI (Arnis Philippines System) and is also often used during competitions. Eskrima is also often taught in various martial arts schools around the world.

Eskrima is surrounded by many legends about brave warriors of the past. Numerous legends also state how the masters of Eskrima were undefeatable and often mention hundreds and thousands of those killed by skilful practitioners. Although there is no knowing whether these are true or not, Eskrima is considered to be one of the most effective martial arts. Its most notable characteristic is the fact that practitioners fight without any form of protection. Long tradition of duelling has survived even thought the fighting has been deemed illegal in the Philippines. Masters still gather in major parks and often prove their qualities in so-called “friendly matches”. Locals are also likely to carry knives more often than guns and do not hesitate to use them when tempers rise.(2)

Eskrima is famous for its practice of dealing with weapons early-on during one’s training. This philosophical principle sprang up from practical needs of the past – villagers had to learn self-defence techniques in short periods of time. Most Eskrima styles follow the principle that the best defence is a good offense. They also emphasise good footwork, concentration and being one with the weapon.

Some of the basic rules according to WEKAF include regulations of the contest area and allowed techniques. The ring should cover the area of not less than five and not more than seven square meters. Fights consist of three rounds, each lasting for a minute. While fighting, fighters are forbidden to strike the groin and the neck, but they can attack any other part of the body above the knee. Hitting the back of the body is only allowed when competitors face each other, while hitting the back of the head is not allowed. Moreover, only two consecutive strikes to the same target area are allowed.(3)

Eskrima is often referred to in numerous films, TV shows and video games. Some popular movies have used Eskrima techniques and have incorporated them in action scenes. It was used in the 2014 film I, Frankenstein, as well as in the famous movie The Book of Eli, where Denzel Washington used a Bolo blade in self-defence. Some famous video games, including Far Cry 3 and StarCraft II also utilized numerous elements of Eskrima.