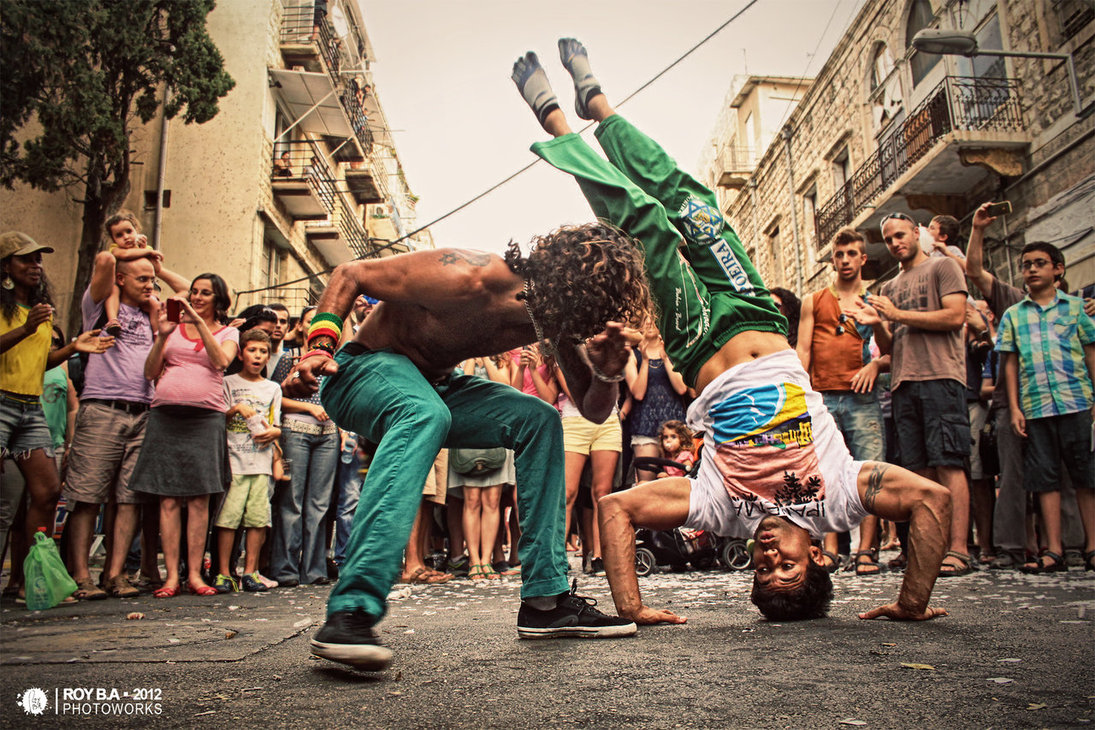 Capoeira is a Brazilian martial art form that fuses fighting and dancing into unique rhythmical movements. It is performed by two persons and it is often described as a conversation, a dialogue that takes place between the two. The origins of Capoeira are still debated amongst historians, but there are only a few common things that most people who study the art form of Capoeira agree on and the ensuing discussion is based purely on those things that are common throughout.

The origins of the word Capoeira are as controversial as the origin of the art form. There is evidence that the word comes from the Bantu word “Kapwera” which means “Fight”. It is a word that is largely used in Angola and leads one to believe that the art form might have been brought by the slaves who came from Angola when Portuguese sailors took over that part of Africa, colonized and in turn transported a lot of its inhabitants to other colonies as slaves. The word may also have come from the Tupi language that referred to low vegetation in Brazil where the game was played. There is another possibility that the word is derived from a Portugeuse word capão which is a bird cage used to keep capons (male chickens that are castrated when they are young). This is suggested because the slaves used to bring these chickens in their cages to market and passed their time playing the game of capoeira.

There is another etymological connection to the Kikongo word “Kipura” which in the Congolese cultural context referred to the sweeping movements made in martial art.

Capoeira is widely considered to have been a form of martial art or athletic game that was introduced by African slaves to Brazilians during the time of the Portuguese occupation when slavery was at its peak. In the 16th century, Portugal began exporting African slaves to some of its colonies, predominantly Brazil to provide labor to colonists. Brazilian slaves were living under harsh conditions, forced to work and pushed for the smallest behaviors. To ensure that they could be controlled, Brazilian slaves were not allowed to carry weapons, or practice any form of martial arts. They, therefore, had to disguise their martial arts in dance and music.

The fighting structure of Capoeira was developed in the back-country villages formed by runaway slaves and other people escaping the law called “Quilombos”. Life in the Quilombos was much freer and people had the opportunity to revive traditions and practice things that were outlawed. Capoeira had a chance to evolve into an art form based on war.

When slavery was abolished in 1888 by a law called Lei Áurea (the golden law), sanctioned by the imperial parliament, many slaves found it hard to fit into their new life. Now there were former slaves from all corners of the world looking for employment. It became harder for most to make ends meet and they resorted to applying Capoeira in criminal ways. War lords and criminals used Capoeiristas as hitmen. When groups of Capoeristas called “maltas“ raided the capital in 1890, the new republic of Brazil once again prohibited Capoeira. Repression only began to decline in the late 20’s and only started to be seen as a legal martial art form when Mestre Bimba from Salvador began working out a training method which he introduced as Luta regional Baiana (regional fight from Bahiana) in the first Capoeira school founded in 1937 with permission from the Salvadorian secretary of Education. The name Luta Regional Baiana was used to disguise the fact that Capoeira was being taught because in reality it was still illegal and remained so until 1940.

Present Day Capoeira is more than a martial art, it is a way for Brazilian culture to be introduced to the world. Capoeira masters (mestres) began emigrating to other countries and started teaching the art form to people in those countries. Capoeira attracts a lot of people in other countries who become Capoeira students and want to learn the deeper things of the culture attached to the martial art form. Capoeira presentations, normally theatrical, still take place in the streets of Brazil and in other cultural celebrations around the world. Capoeira is more than martial arts, it is a symbol of Brazilian culture.

Capoeira was a way of life for slaves who were completely ill-equipped to defend themselves to survive attacks by armed colonial agents or capitães-do-mato, charged with capturing slaves who used to escape. Slaves could only hope to hide the fact that they could fight with music and rhythmic movement. It is said that the largest Quilombo, the Quilombo dos Palmares, survived numerous attacks. It was believed that it took more than a small dragoon of Portuguese soldiers to take down a quilombo warrior. It was hard because the Portuguese could not understand the strange movements that they employed in their fighting technique.

The police in the 1800s started keeping registries of Capoeira practices in Rio de Janeiro, Salvador and other growing cities in Brazil. In Rio, suppression was rife and more escapees were arrested for practicing Capoeira when they were being recaptured. In one record of a jail in Calabouço jail of the 288 slaves arrested in a single year, 32% were arrested for practicing Capoeira.

A woven Blitz label is featured on the top of the left leg. Traditional tie waist for a precise fit and maximum comfort. 100% cotton. 12oz.

Designed for Martial Arts, the Student Martial Arts Trousers are made from a luxuriously soft and non-abrasive material.

Ideal for any athlete who needs maximum leg flexibility, such as yoga practitioners or disciplines involving kicking.

Improve your power, speed and endurance with the Blitz Training Skipping Rope. Ideal for Boxing, MMA and any exercise regime.

Whether it is walking, running, punching or jumping, these wrist weights provide additional resistance to your daily workout.

Designed to add extra weight to your workout, the Blitz Ankle Weights enhance bodyweight movements, to tone and strengthen.

Capoeira is often called a game “jogo” but Capoeira is more than just a game. The history and the way it has been preserved through the years within Brazilian culture is testimony of how much more it actually is. Different schools of Capoeira teach different philosophies, but there is a common thread. Capoeira is not a game or a sport with clear winners and losers, there are no referees, no time limits, no rigid rules except for those that are traditionally taught to give flexibility to the actions. The correct way of defining Capoeira is that it is a “dance-fight game” done to the sound of music with elements of dance, self defense and martial arts. The basic foundation of the philosophy of Capoeira is defined as a specific way in which a player sees life and interacts with the world.

Capoeira advocates knowledge of the true nature of all humans, including your own and that of all the players and all things. It advocates for global knowledge and a strong sense of humor. The real knowledge that you are meant to gain is the knowledge of the body, it says that by interacting with different people you may learn to relate to life and to different people and different situations. The good humor relates to the lust of living and finding joy in life. Good humor is meant to temper the player and prevent him from being someone fascinated by power and incapable of having fun.

Capoeira has a lot of customs and etiquette not rules per ser. There are a few basic things that a Capoerisat has to know during a game of Capoeira within a Roda.The main thing to remember at all times during a game is that the purspose is not to hurt but to interact with the other person, determine your next move by watching their movements.The roda is a physical circle made up of players and musicians. The entrance is always in the front of those playing the music. It is also the point where they leave the game. Players enter the roda by cartwheeling into the center. Players either buy into a game or are picked. The game is ended either by certain tones being played on the berimbau or if another player buys you out of the game. Every person in the Roda is supposed to participate by either playing an instrument, clapping or singing.

The globalization of Capoeira has meant the explosion of Capoeira in popular culture all over the world. The internalization can be pinpointed to 1977 with the opening of the first Capoeira school in New York City. Since then Capoeira has made its way into movies, music, video games that glorify the art of Capoeira and the martial art aspect of the game.

Cordão de Ouro is one of the earliest movies to have Capoeira featured in the main plot. It was made in 1977 and stars well known mestres like Mestre Camisa and Nestor Capoeira.

“The Strong” is one of the most popular films that showcase Capoeira. The only problem with this film is the unrealistic portrayal of the art form.

There are a lot of notable martial art actors who have showcased their Capoeira skills like Vincent Cassel in Oceans Twelve. Lateef Crowder is an experience Capoerista who has been practicing the art since he was six and has featured in popular movies that have become cult classics like The Protector, Tekken and Undisputed III: Redemption. Wesley Snipes, who is one of the most famous action heroes has also professed to have studied Capoeira and incorporates it in some of the movies he has been in.