Rosi Sexton has inspired countless females throughout the globe, and still continues to do so. Not only due to her work ethic and character, but through the knowledge she hands down to the younger generation. The exposure she has brought to WMMA in the UK, a country that really needs it, deserves a special accolade by itself – namely the Awakening Outstanding Contribution Award (AOCA). We are extremely delighted to add this pioneer to our hall of exemplary athletes who have played important roles in raising awareness and the public perception of female fighters.

On Thursday, Rosi Sexton retired from MMA at the age of 36 via a heartfelt article on her website, and it was a sad day yesterday as the news trickled out into social media. There had been speculation over when she might retire due to her unfortunate recent bad form inside the cage; losing via unanimous decision to Alexis Davis and Jessica Andrade in the UFC octagon, and earlier this month to the extremely talented Joanna Jedrzejczyk.

It’s a shame to think that these three losses happened together at the end of a career, as they really aren’t a true representation of Rosi’s talent. She was never one to shy away from top level opponents…

“As a veteran coming towards the end of a career, you have a choice. You can fight cans, or you can fight prospects. Anyone can look good against someone who isn’t. When you fight prospects, there’s always a chance you’ll go down in flames. Living with the knowledge that I’d taken the easy way out would have been much harder.”

With the huge recent surge in popularity in WMMA, there is undoubtedly a lot of people unaware of the achievements of Rosi Sexton. She can truly be classed as one of the pioneers of Women’s MMA! This is even more impressive considering that she’s British, a country that even now is lagging behind the rest of the world in mixed martial arts.

She was originally born in France, but at a very young age moved to Britain where she gained her impressive list of educational accomplishments, including a PhD in Theoretical Computer Science and a first class degree in Osteopathy. If you’ve ever wondered why her fight name is “The Surgeon”, now you know… she’s Dr. Rosi Sexton! 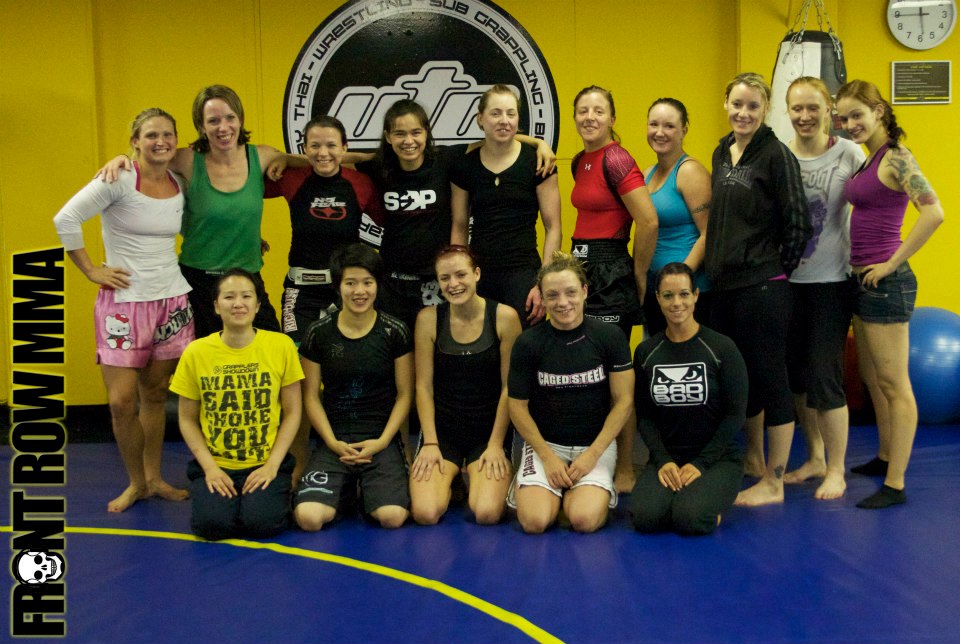 Rosi Sexton MMA Camp in 2012, one her many camps and seminars

During her youth she tried several martial arts, and sometime around 1999/2000 she discovered MMA. Back then it was still a relatively underground sport. She had wondered what would happen in a real fight, could she piece all the knowledge from her previous martial arts experience together? Yes she could, in 2002 she proved a lot to herself and won her first fight via Armbar.

She didn’t tell her parents about competing because she wasn’t sure how they would take it. It wasn’t until later that they found out themselves by doing a search on the internet!

Looking back at her twelve year career she has fought a real who’s who of talent, with a record of 13-5-0. Other than the three fighters mentioned at the start of the article, her only other losses were to Zoila Gurgel and Gina Carano. Among those she’s beaten are: Aisling Daly, Debi Purcell, Roxanne Modafferi, Carina Damm and Julia Berezikova!

Let’s raise our glasses and toast the career of one of the true women’s MMA pioneers! Thank you for everything Rosi!