We were fortunate enough to be ringside for this epic occasion on 26th July 2013 at the Hard Rock Hotel and Casino in Las Vegas. The event of course was Lion Fight 10, featuring five amateur and six professional bouts. There were two female fights on the card, an amateur bout at 110lbs between Miranda Cayabyab (Milpitas, California) and Angela Hill (New York, USA) and of course the professional Lion Fight Featherweight World Title bout (126lbs) Tiffany Van Soest (Redondo Beach, California, USA) vs Lucy Payne (Penzance, Cornwall, UK). We can report great news for female fighters everywhere by telling you that the general atmosphere at the event, and that of the audience, was as fired up for this fight as it was for the main event. Female Muay Thai is gaining ground thanks to promotions like Lion Fight and young fighters such as Lucy and Tiffany.

The fifth and final amateur bout saw Miranda Cayabyab take on Angela Hill. Angela fights out of Evolution Gym, and has an impressive unbeaten record of 13-0, with 3 wins by KO. Angela's opponent was originally billed as Genesis Bravo (Las Vegas, Nevada, USA), but unfortunately she was unable to compete due to injury. Due to the last minute stand in we currently lack details for Miranda, but we will endeavour to get a hold of them. 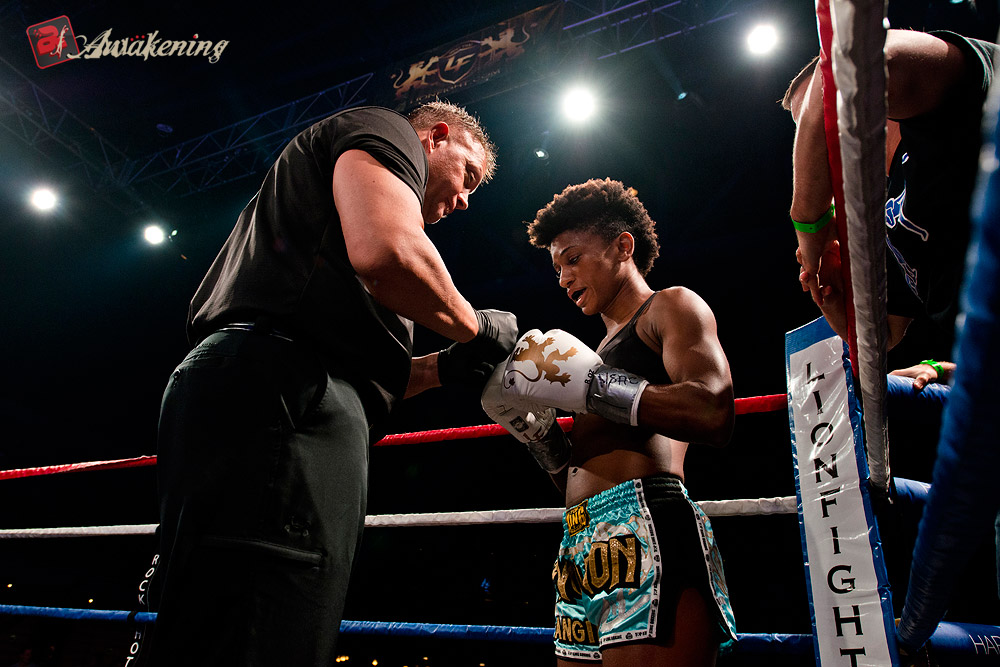 Miranda looked sharp early in the first round and narrowly missed with a couple of wild spinning back fists attempts, but in the end Angela's power and aggression was just too much on the night landing a perfect overhand right to Miranda's jaw at 1 minute 14 seconds of the first round which ended in Angela's forth KO victory. The knockout itself was unusual in as much as it was so sudden, Angela appeared to stop for no reason, Miranda slowly crumpled to the floor. Most fighters would continue punching until their opponent was on the floor. We think Angela showed extreme class for understanding her job was done. Remember the name Angela Hill, you will hear it again for sure. 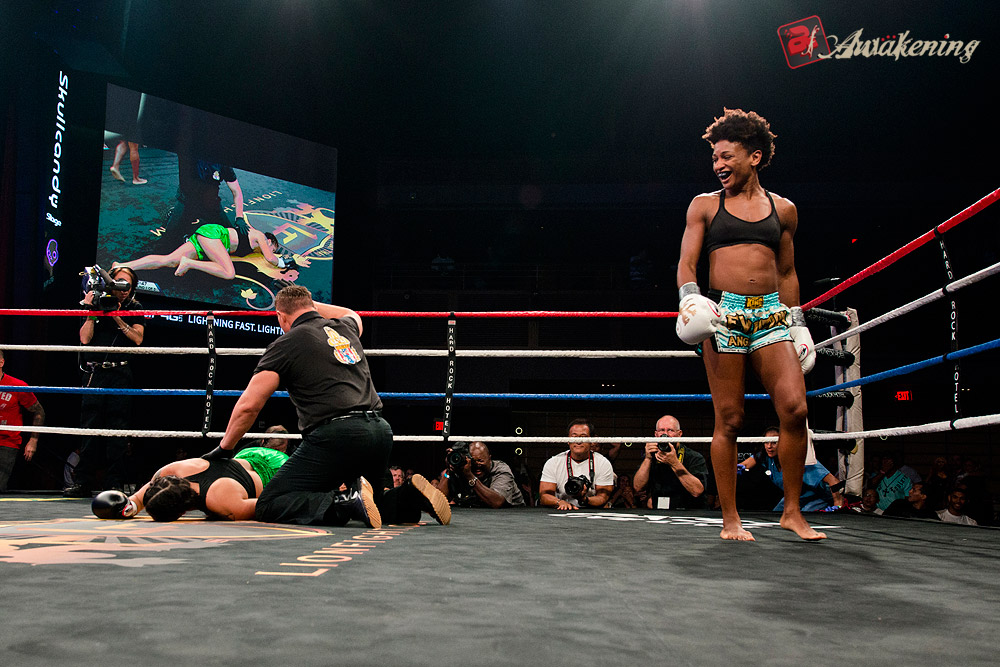 The fourth professional fight was the long time coming world title bout between Lucy Payne (20-5) of Touchgloves Gym (Cornwall, UK) and Tiffany Van Soest (7-0-1) of Blue Ocean Gym (San Diego, USA). Lucy came into the fight with an impressive eight inch height advantage over Tiffany, many fighters have struggled with her reach and high level technical striking. On the other hand, Lucy has never faced a powerful and fast fireball like Tiffany, and unlike most fighters we know that Tiffany was unphased by the reach disadvantage. 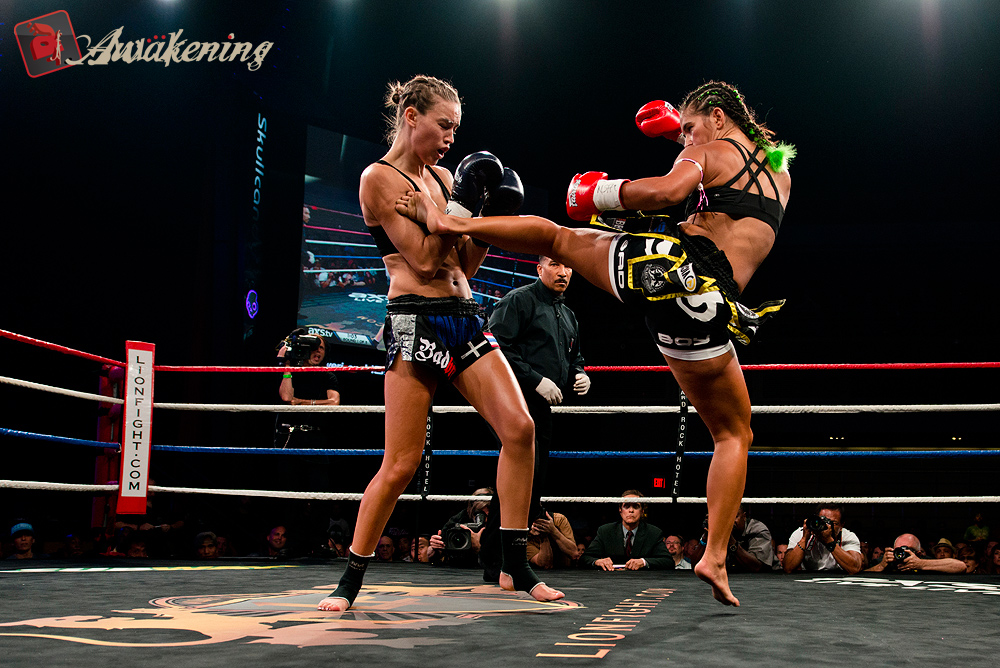 The fight itself began fairly evenly (see photos) with both ladies feeling each other out and landing some exchanges. Just after the second minute Lucy stepped back which allowed Tiffany to land a solid right hook. Tiffany saw her opening and launched into an attack which resulted in a barrage of punches and elbows. Her strength in coming forward proved too much as she caught Lucy with a series of powerful elbows to the head, causing Lucy's knees to buckle and placing a glove on the canvas. The referee felt that Lucy was unable to defend herself against Tiffany's further attacks and stepped in at 2 minutes and 30 seconds of the first round. There was some confusion as everyone waited for the eight count, which never came. The referee ending the fight by way of TKO and crowning the jubilant crowd favorite Tiffany Van Soest as the new Featherweight Lion Fight World Champion. Tiffany also showed class after the fight in checking that Lucy was okay. 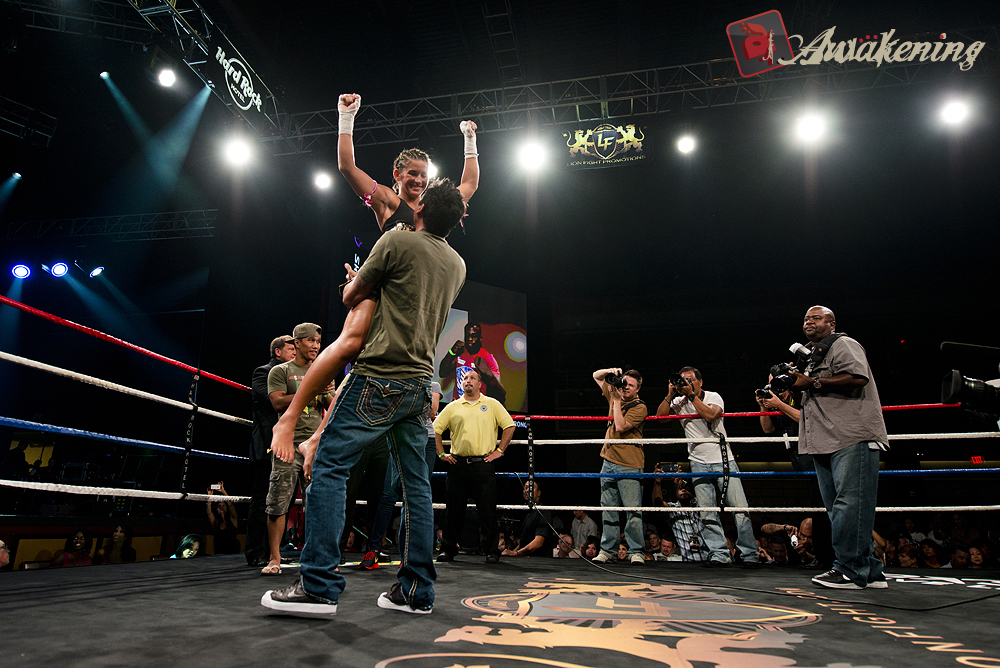 To quash any potential controversy, after the fight we decided to do some investigating about why there was not an eight count. We found out that when Lucy was asked by the referee "Do you feel ok?" and she replied "Yes, but my head hurts". The referee of course did the right thing, and we can confirm that there was NO controversy here!

Lucy and Tiffany chatted after the fight exchanging kind words at the after show party and both expressed wishes for a rematch. President and CEO of Lion Fight Promotions Scott Kent said that a rematch is not out of the question. We certainly hope it happens. Hats off to the girls, and Lion Fight for putting on a great show!