The most interesting part about a knockout is that it can completely alter many things way after the fight. Whether it’s a bonus for KO of the night, an increase in rankings, or garnering a vicious reputation, a knockout is a definitive, no frills way of a fighter saying “I Won.” One punch, one kick can change history, and MMA is no stranger to giving fans such excitement.

Fans were treated to a much more competitive matchup during the month of March, as there were encounters that stood out as having some of the best UFC knockouts. Thus, in this article, we'll take a look at five of the best fights that resulted in an excellent old-fashioned knockout.

Although four of the top 5 are from male bouts, our top pick is unsurprisingly going to be a female bout.

"A much under utilized legal strike," praise coming from the biggest star in the field of mixed martial arts, Connor McGregor, to Khalil Rountree Jr., who landed a thunderous soccer kick on Karl Roberson in a light heavyweight battle.

When Khalil Rountree Jr. came to the octagon in 2022, he hoped to finally piece together a winning run after claiming victory over Daniel Jolly and Pauli Craig in 2017, which resulted in him not obtaining a win in succession. In his first bout of 2022, he was scheduled to face Karl Roberson.

The first round was pretty fair, as Rountree Jr. maintained control of his distance and range from Roberson. Rountree Jr. then unleashed a devastating left hook in the second round with less than 30 seconds remaining. The hook was powerful enough to send Roberson to the ground.

As Roberson gathered himself, Rountree Jr. cracked open a powerful soccer kick to his chest, ultimately ending the fight. Though somewhat controversial, a soccer kick to the chest or any part of the body except the head(and other prohibited areas), is completely legal in the UFC.

Marlon Moraes has had a miserable ride in the bantamweight division since his failed shot at UFC gold over Henry Cejudo in 2019. Entering 2022, the Brazilian was on a three-fight string of losses and was keen to reclaim his winning ways as he faced Chinese prospect Song Yadong.

Moraes did not simply lose close fights in his previous three battles over his opponents, Rob Font, Merab Dvalishli, and Cory Sandhagen. He was brutally struck down on all three occasions, and his durability was questioned heading into the battle with Yadong.

Unfortunately, doubts against Moraes were seen again as Song floored him with a stunning uppercut at close range less than 2 minutes into the opening round. Seconds afterward, the referee dove into position to bring the battle to an end.

Azamat Murzakanov is a name that may be unfamiliar to the majority of fans. The Russian fighter entered the UFC following a successful debut on Dana White's Contender Series, where he won via TKO in the first round. Murzakanov's perfect professional record rose to 10-0 with this victory.

At UFC Vegas 50, he was scheduled for a matchup against Tafon Nchukwi in his promotional debut. Throughout the bout, Murzakanov appeared to be ahead of Nchukwi. He was more accurate and robust in combat exchanges, and he quickly bullied his rival all around the octagon in the clinch.

Nchukwi, obviously knowing of his two-round deficit, made him begin fighting more aggressively in the third run in pursuit of a finish. He was, however, too careless and was struck with a devastating flying knee from Murzakanov, knocking him out in the process.

Ilia Topuria is ranked No. 15 in the UFC's featherweight category. He was initially scheduled to fight another rated prospect Movsar Evloev in January but then was withdrawn from the card due to weight cut concerns.

He accepted a bout over unranked English lightweight Jai Herbert out of desperation to return to the octagon. Moreover, Herbert's apparent size advantage was on display in the opening round, as he ripped off Topuria with lengthy punches. The Englishman even delivered a devastating head kick that stunned his Georgian opponent, who had miraculously survived the first five minutes.

However, Topuria did not permit Herbert any breathing room in the second round. A little more than a minute through the round, he struck a stunning combination that sent his British opponent flying to the canvas, stunning the O2 Arena audience for the win. 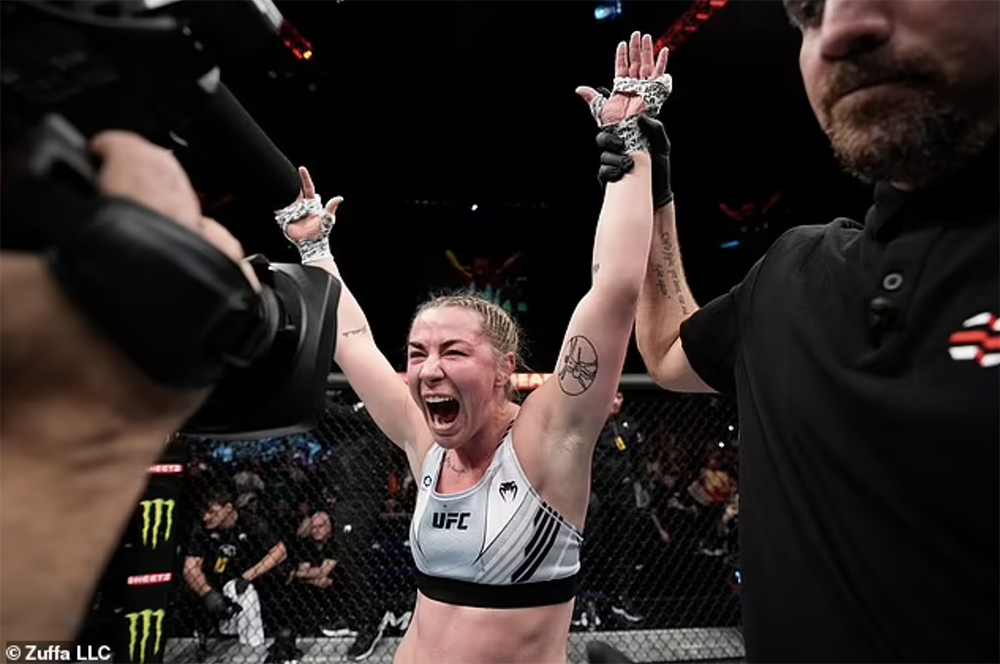 Molly McCann was a four-time knockout winner prior to attending the UFC. However, since entering the world's best mixed martial arts promotion, she has struggled to finish her rivals and has relied heavily on her unrelenting pressure.

McCann began the fight in her typical approach, suffocating Carolina with non-stop offensive pressure for the first five minutes. Unfortunately, she seemed to have overcompensated in the opening round, as she appeared somewhat exhausted in the following.

Carolina clinched with McCann in the last round of the match. McCann, however, gained a bit of space which was more than enough for her to deliver a tremendous spinning elbow that knocked her opponent unconscious. After Molly stole the show at UFC London, her odds in the sports betting UFC community increased.

Everybody appreciates a spectacular knockout, and arguably, a knockout in a UFC match makes the crowd go wild. Although a finish via submission or judge’s decision is also welcome, nothing can excite fans more than an unbelievable knockout.