18th August 2012. It was a great fight card indeed this evening. There were many male fighters, who all put on a great show, but you’re not on the Awakening page to read about those and we’re not here to write about them. Hats off to them, use Google to find out more. 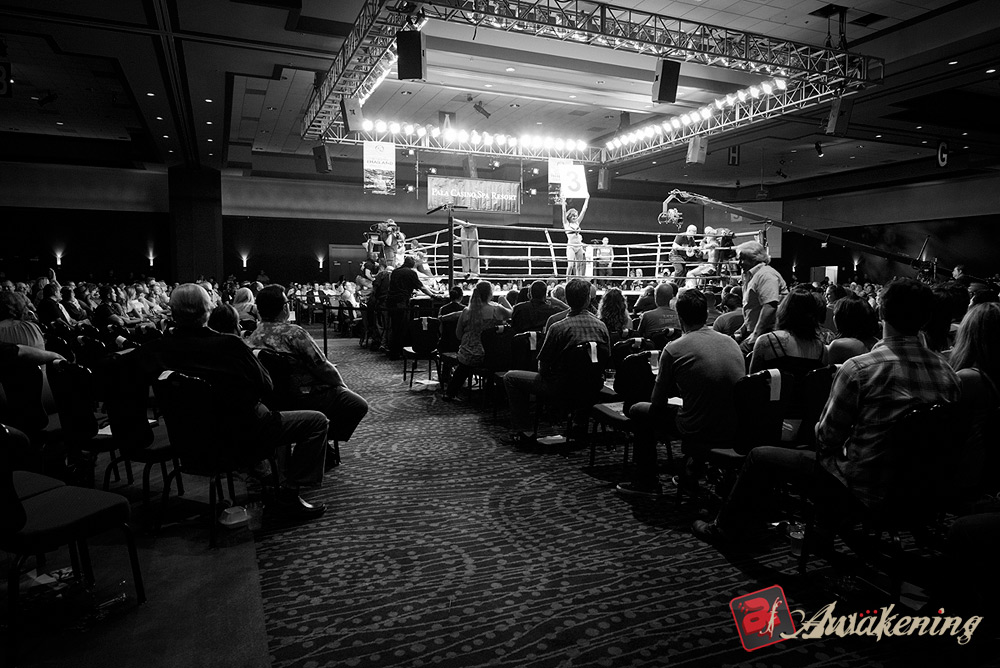 The female bouts started with Marie Choi vs. Gabriela Carrillo. Marie looked more confident coming into the fight and we expected her to win. She maintained her confidence and composure throughout, despite her right eye starting to swell in the second round. Mexican fighter Gabriella put up a great fight and surprised us by winning by decision.

The second female fight of the night was Lena Ovchynnikova vs. Kealani Vanderleest. At weigh-ins, Lena looked to be the stronger, fitter fighter and Kealani seemed relaxed and had a quiet confidence about her. We expected Lena to win, and yes she did – however, Kealani is no pushover. This wasn’t the best to her ability that Lena has fought and she scraped through with the victory after getting tired. The judges made the right decision but it was close. Kealani was unfazed and just kept coming, landing some heavy shots to the face. The tired Lena won but suffered a broken right hand.

The penultimate female fight was Tiffany Van Soest vs. Jemyma Betrian. This was a last-minute match up after a couple of other fighters pulled out over injury. Jemyma has been tipped to be a future champion, after watching the youngster spar we can tell you that she has lighting fast speed. Tiffany had a problem making weight and was 2kg over. The fight continued as usual with Tiffany offering a portion of her purse. Jemyma had every right to cancel the fight, but after flying to the US from the Netherlands almost every fighter would continue. We expected Jemyma to win because of the effect that cutting weight had on Tiffany – she did NOT look happy at weigh-ins. In the first round, however, Tiffany came out blazing, hitting very hard until the end of the fight. Jemyma was knocked down once and seemed to underperform, possibly out of shock from Tiffany’s power. The fight was a draw, disappointing to most people but we think it was a good decision.

The last fight of the night, taking precedence over the male fighters (and rightly so) was the biggest in female Muay Thai history – Julie Kitchen vs. Miriam Nakamoto. Neither fighters need an introduction from us. Of course, here at Awakening, we don’t hide our sponsorship and love for Julie but we will try our best to remain unbiased. The build-up to fight was interesting, Julie was her normal “nice” self; she even reined us in on our first draft of the promo teaser saying that it was unlike her and might seem a bit rude (we can’t tell you what the first draft said!). During the build-up Miriam had been quite outspoken, bordering on nasty which in turn created the festering grudge between the two fighters. It should be stated however that Miriam was uncharacteristically silent in a couple of weeks prior.

The weigh-ins were frosty, and we had the first-hand experience of it. Julie got there first and was simply testing the scales with the promoter before the weigh-ins started. Miriam appeared early also and seemed to be agitated that in her mind weigh-ins had started. She speedily took off her clothes and postured. The weigh-ins started right there and then. Because Julie had only been testing the scales, one of the Awakening team (me) was stood to peer over her shoulder. When Miriam appeared, I was all of a sudden the innocent filling in a grudge sandwich. I have NEVER felt tension quite like it. I tip-toed backward nonchalantly hoping not to be spotted or get squished. From the photos, you can see Julie carried herself in her usual confident and classy way, while Miriam seemed (and I say that as an opinion) a little agitated and overshadowed. 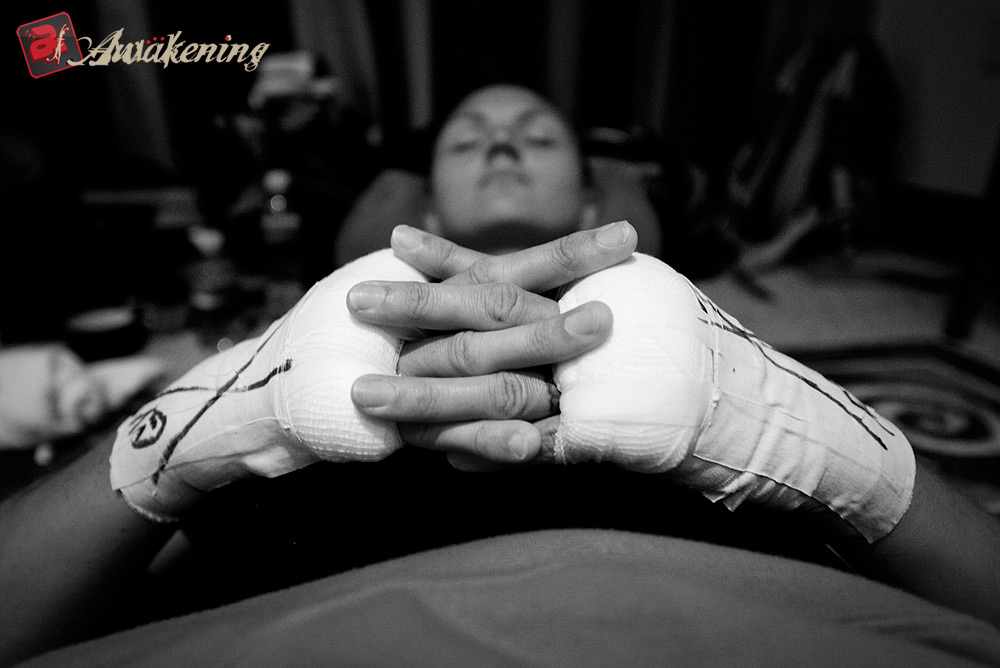 We had the pleasure of being with Julie in the dressing room pre-fight. The dressing room of someone at her level is in an interesting and overawing sight – that’s all we’re saying. Julie entered the hall with a lot of love from the educated crowd, and Miriam’s entrance seemed slightly overshadowed – the energy in the room was fantastic throughout.

The first round was fairly even with both fighters feeling each other out; effective strikes were thrown by both opponents. Miriam showed a lot of power and caught Julie dead in the face with what seemed like some of her hardest shots. Miriam sustained a tiny cut to her nose, almost not worth writing about as it was no larger than a pea.

The second round began and Miriam came out slower, possibly shocked at Julie’s ability to take a hit unphased. Julie has never been rocked in her career and these were possibly the hardest hits she’s taken. (After the fight Julie confirmed with us that she was still not rocked). Blows were exchanged and things were looking pretty even. Mid-round Miriam delivered a 6 O’clock elbow to the head, which was debatably an illegal move at this event. Julie still appeared unphased, but her corner and a portion of the crowd reacted to it. The fight continued.

Early in the third round, Miriam illegally threw Julie and it was unanswered by the referee. Julie was starting to appear a little unaggressive. We’ve seen her train for twelve weeks and it’s been ferocious. It seemed as though Julie forgot to bring the grudge to the grudge match. She was fighting well, but not 100% of her ability by any means. Towards the end of the round, Julie opened up a cut on Miriam’s forehead that instantly gushed blood (covering my shirt). Miriam didn’t seem too bothered and remained very aggressive.

The fifth and final round started and Julie’s corner was going crazy at her to come with aggression, despite fighting an amazing fight that the crowd was loving, she failed to be as aggressive as her corner required. Miriam delivered another 6’O’clock elbow, this time a flying one. In some of the attendees' minds, this warranted a point deduction. Julie’s corner had been told one set of rules before the fight and Miriam’s corner and the ref another. No excuses, this is the fight game and Miriam was the better fighter on the night regardless of the controversy. In the final seconds, Miriam’s cut re-opened and splashed my lens. The decision was given to Miriam Nakamoto. The fight was much closer than the judges scored, the ridiculous 49 – 46 last round was bizarre.

There are rumors there will be a rematch in the UK, just rumors at this point. You all know how much we support Julie for who she is, what she has achieved and what she is doing for female martial artists globally… but we agree (with a heavy heart) that Miriam brought her A-game and Julie did not. The fight itself was awesome.

After the fight, it is rumored that Miriam was taken (not rushed) to the hospital to get her cut stitched. Julie, on the other hand, dusted herself off, and an hour later re-entered the casino looking extremely glamorous without a scratch on her. Fans appeared at the bar where she was drinking with us to give her love and request photographs.

The bottom line is that Miriam is a good fighter, a very good fighter and deserved the win. Julie, on the other hand, did not bring her A-game on the night but in a lot of the Muay Thai community remains the “Queen of Muay Thai”. A fight record that most fighters can only dream of and the all-time greatest ambassador for female martial artists globally.