Recently Muay Thai fighter Hatice Ozyurt (aka The Turkish Delight) posted a new promo video to her Facebook Athlete Page. We decided to take a look at it and discuss a few things.

In her promo, Hatice makes her intentions very clear! She is gearing up to spend more time in the cage. We're all dying to see if her incredible Muay Thai record of 71-7-3 translates well when she puts more time into Women’s MMA. She had three fights a couple of years ago, making her 1-2-0 in MMA - it's a little early to tell, but she seems very focused now.

There is a look in her eye as she addresses the camera, and an air of confidence in her voice. She means business and has goals of fighting the very best over in the States, she mentions Ronda Rousey, Cyborg, Miesha Tate and fellow Dutch fighter Germaine de Randamie.

"Everyone knows me as a little girl, but what everyone MUST know is that I'm a fighter, I'm a real fighter and I will fight anyone. I don’t care if she's big, if she's 10 x World Champion - I will step in the cage and I will fight definitely!"

It's clear that Hatice has some proving to do in the cage, but we really hope that one of the larger organisations takes her up on this general call out…

"I will be there, if you invite me… I will fight!"

We wish the best of luck to her, and just hope that the UFC and Invicta Fighting Championships are listening.

Going back a few weeks to her cancelled fight, we'd like to independently comment on the situation. She was slated to fight Annabelle Gely at Battle Under the Tower on February 22nd, for a Muay Thai world title. This fight didn't happen unfortunately due to an issue with making weight. After following comments on social media, Hatice received a little bit of backlash as the majority of fingers had been pointed at her for the cancellation. When we decided to post about this promo video, we thought we should check in with Hatice first to hear her side. 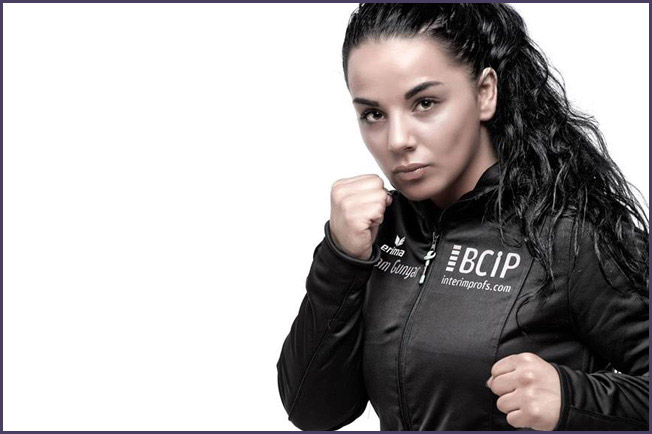 After speaking to her, it seems as though it was a mix up with weighing in times between the promoter and both fighters. The fight was at 63.5kg, which is the world title that she holds with the promoter. After waiting some time for her opponent to arrive, she ended up weighing in at 62.8kg in the morning of the day before the fight - the promoter had said it was ok to do so. Annabelle arrived in the evening and weighed-in at 62.5kg (she had travelled from England on short notice).

Although Hatice had proof of the result of her weigh in, Annabelle's camp wished for her to weigh-in again and she refused as it was now several hours after weighing in herself. It's a valid request for both fighters to wish to see their opponent’s weight. It's also unfortunate that travelling on short notice and arriving late is unfair on an opponent. Weight is such a tricky issue and these situations will always occur from time to time. Our synopsis is that the stars simply weren't aligned that evening!

Why not give us your thoughts on Hatice focusing moreso on the cage now. Comment below!