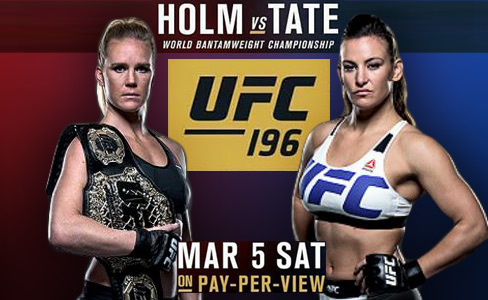 With UFC 196 just around the corner there's a real buzz in the air, as we're all getting set to watch Holly Holm make her first defence of the UFC World Bantamweight title against Miesha Tate. There's speculation on social media amongst fans as to how it will go down, "What are Tate's chances?". Whilst it's understandable that many will be referencing how each fighter faired previously against Ronda Rousey, we decided to break down Tate's chances further.

With betting odds heavily in Holms favour, to the untrained eye it's already written that Holm with win. We strongly disagree and believe that this fight is indeed wide open. Tate is the underdog and rightly so, however Holm will find her a completely different fighter to Rousey who was highly emotional when she entered the fight. It was unusual to see Rousey fight in that mental space after getting rattled at the weigh-in. Holm incidentally had had triple the amount of stare-downs prior to this and clearly won the psychological battle. Tate on the other hand is cool and calculated. She always enters each fight the same, calm and focused. We doubt very much that there will be anything but respect shown at the Holm vs Tate weigh-in. Furthermore, Tate's going in as the underdog and is free from the pressure that Holm must be feeling.

Below a capture from the UFC website shows the stats of both ladies, from a UFC point of view. In the top half of the graphic three stats immediately jump out at you.

Holm vs Tate fight records
Whilst Holm has an unblemished record of 10-0 - one of those victories being over Rousey of course - she has yet to face a fighter with Tate's experience. She does have two decision victories over UFC fighters Raquel Pennington and Marion Reneau, and another victory over Juliana Werner who could quite easily hang with UFC bantamweight division. Fun fact; these three athletes have a combined victory total of 20 fights, Tate has 17. Do you see where we are going with this? Tate's experience is almost unparalleled in the bantamweight division, she has significant wins over; Jessica Eye, Sara McMann, Rin Nakai, Liz Carmouche, Julie Kedzie, Marloes Coenen, Hitomi Akano, Zoila Gurgel and Elaina Maxwell to name a few. Her losses have been to four very credible athletes in Rousey, Cat Zingano, Sarah Kaufman and Kaitlin Young. In short, Tate actually has 220% the MMA experience over Holm, and generally against tougher opponents.

KO/TKO
Undoubtedly Holm excels in this area with her vast boxing background. It's highly possible that she has the fastest hand speed in women's mma today. We believe that Holm will be looking for a KO/TKO against Tate, unlike her measured fights against Pennington and Reneau. These fights left many UFC fans confused as to what all the fuss was about. Holm fights in a similar style to GSP, calculated. You're aware that they can turn it on at any moment, but often do just what is needed to win. Suffice to say Holm or GSP rarely make mistakes. It's not impossible but it's unlikely that Tate will win by KO/TKO.

Submission victory
Holm has yet to really show her ground game, but training out of JacksonWink MMA you better believe she has the skills. Tate has proven her ground game time and time again with five of her victories being by way of submission. She has an extensive history in wrestling and this is often noted by commentators during bouts. You can expect Tate to have the edge if it goes to the ground. We doubt she will be able to submit Holm, but she has an opportunity to gain favour with the judges here.

As for the UFC's stats regarding "significant strikes" and "grappling". We have largely discounted these in our analysis because they are likely to only refer to UFC bouts.

It's also worth pointing out that according to the above graphic, Tate has a terrible leg reach disadvantage! In all seriousness though, Holm not only has the height and reach advantage, but she is an athlete that knows how to utilize it. This will be a problem for Tate if she stays on the outside.

We feel that this fight is likely to come down to a decision. Holm has to be careful not to perform in the same calculated manner as the Pennington and Reneau fights. Tate is gutsy and has one of the biggest hearts in MMA, if it goes the distance it's likely that she will take it.

So what are Tate's chances? Whatever they are, they're not what the bookies think!

Let us know what you think in the comments below!