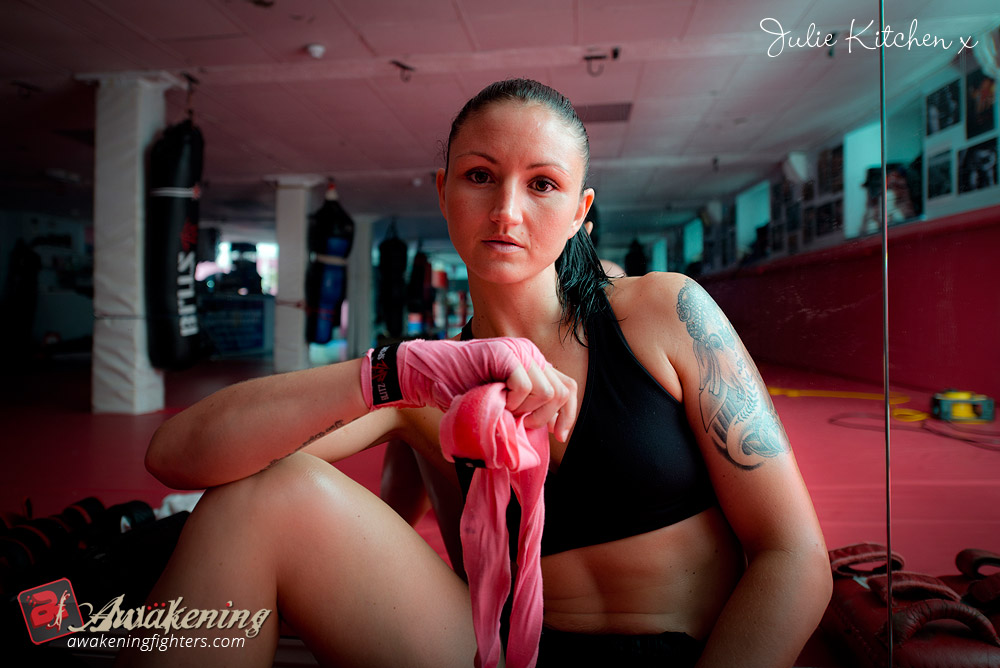 Returning to work after maternity leave, she found the hours impossible. The management, by now extremely fond of Julie, didn't want to let her go so they trained her up to work part time as a wages clerk. This was a job that held a lot of responsibility and she enjoyed it very much. She decided to give up her job when unfortunately her father became ill with throat cancer. She was doing a lot of driving to and from the hospital and spending more time helping out with the family. This is the time when Julie became involved in Muay Thai at Touchgloves Gym. She also married coach, and father of her children Nathan Kitchen in 2001.

A lot of people wonder what the defining moment was in a World Champions life that made them begin their journey into the martial arts. What was it in Julie's life? Ultimately it was her father. When Julie was 23, after she had had the twins, her father had teased her lovingly about her bottom still looking big…

"You're still carrying some weight" he had joked. 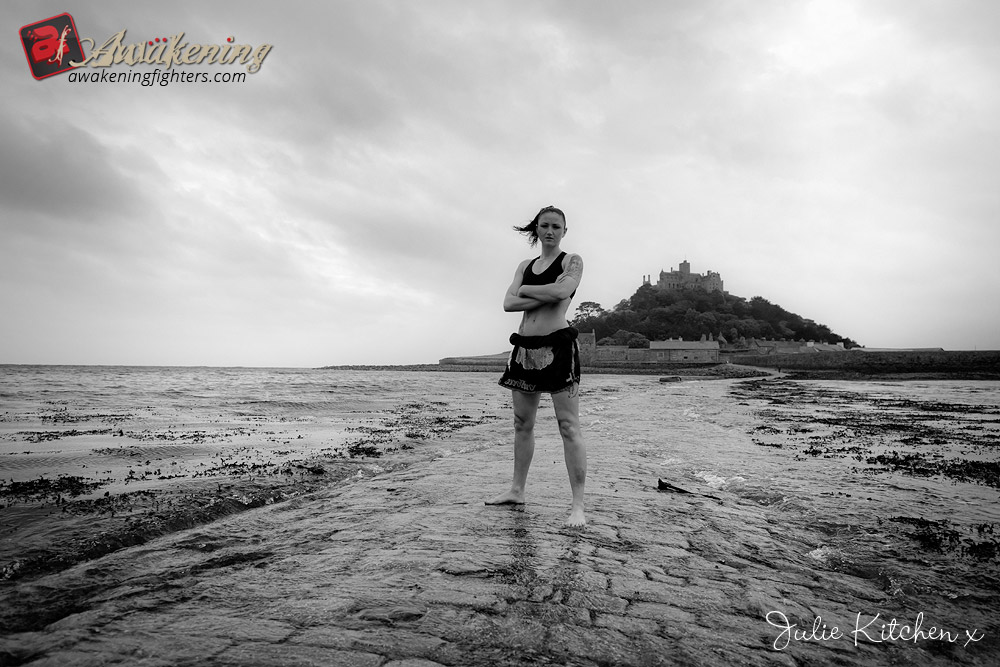 Julie started Muay Thai, and she never looked back. At first she had loved the challenge of training and getting fit, Touchgloves to this day has a punishing regime designed to create World Champions. Nathan loved that she was getting involved in such a beautiful sport, however he was torn when Julie announced that she wanted to fight. He was the typical protective husband and he believed it was out of character for her. His mind-set at that time is understandable, he had witnessed Julie crying during and after sparring sessions. Sparring sessions were always with men due to her height and the lack of female athletes. She would never cry while sparring, she would go outside and cry and then come back inside for more. In the evening at home she would tend to her bruises with Tiger Balm and go back the next day. Essentially, as out of character as it was, Julie fought to prove that she could. Prove it she did!

Her first fight was against Diane Fletcher from Liverpool. She wore two sets of shin guards and a head guard. She found that getting her hand raised after the battle was addictive. Her shyness had completely faded, having the twins had made the woman, and she was now completely addicted to fighting. She had loved everything about the fight, the training, the build-up, the discipline and wanted to fight again straight away.

Julie Kitchen vs Jo Abrehart, her second fight in 2002

Many people believe that someone with such an incredible record must be a "natural". To this day Julie states…

“People say I'm a natural, I'm not a natural…. I've worked really hard, had great training and overcome a lot”

One final fact that Julie has kept to herself all these years, is a medical issue. Her website is the first place it's been mentioned publically. Julie believes that someone somewhere might be able to get inspiration from hearing her additional challenge. At eleven years old she noticed a lump under her left upper arm. Her parents were obviously extremely worried and took her to the doctor. She was diagnosed with an uncommon bone growth that was damaging the nerves, a harmless but uncomfortable additional bit of bone protruding into her shoulder. When she reached seventeen, it was operated on and removed. She was told there was a chance that she would lose the use of her arm. Fortunately this was not the case. To this day it sometimes aches and causes discomfort. This additional challenge has shadowed Julie throughout her career and she has simply fought through it. Unbeknown to any of her opponents, Julie's movement in her left shoulder has been slightly restricted.

This very inner strength and spirit continues to inspire female athletes across the globe. Julie is extremely proud and honoured to be considered the Queen of Muay Thai, a name given to her by her supporters. A surprising fact, to those fans outside of England who perhaps aren't aware of the Muay Thai scene in Great Britain, Julie is actually better known in other countries such as: USA, Italy, Australia amongst many others. She receives emails daily from female fighters around the globe asking for advice and tips, as well as many others that compliment her on her career. She loves the support she gets from her global fans, and she continues to lead the way for future female fighters by way of travelling the world delivering knowledge filled and heart felt seminars.

These days Julie manages a Gym in The Netherlands and can be seen and heard honing her commentary skills for the Enfusion group.