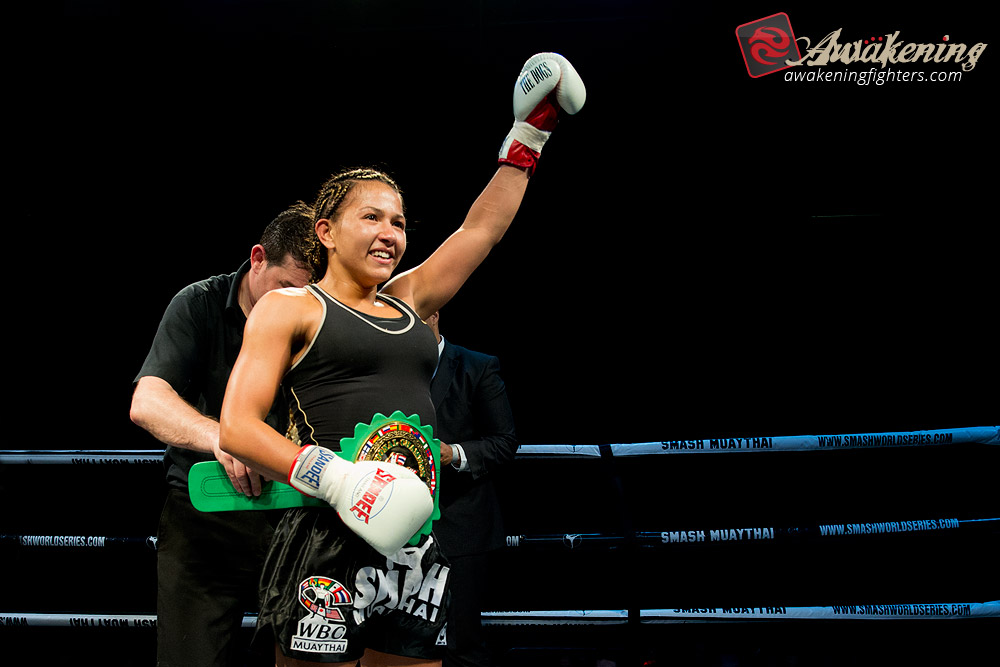 On Saturday the 5th we had the pleasure of seeing Lubena Jane Iske face Bekie Hodge for the WBC British Super-Featherweight Title at Smash 9 in Watford, UK. We arrived a day early at the empty shell that was the Woodside Sports Arena and met the promoters who were understandably up to their eyeballs in organising the show. By the time the doors opened the next day the venue had been completely transformed. It’s obvious that this promotion has had a lot of work put into it, for a UK show this event series can be considered as one of the best. We would like to state now that if you’re in the UK and can get to Watford easy enough then you should get yourself along to Smash 10… and no, we’re not being paid to say that, we’re completely independent as always. The atmosphere in the crowd was incredible and they really played their part. Of course, we only cover the female bouts (of which there were only two), but overall they had put on a great card with some cracking fights.

Bekie Hodge had valiantly stood in with around 5 days’ notice (cutting a holiday short), as Jane’s original opponent, Vicky Church had unfortunately withdrawn due to injury. Although this new match up was most likely unfortunate for the promoters, Bekie Hodge is a more than worthy opponent of Jane Iske. It was actually our first time in being ringside for either of these fighters so we were especially excited for this one, both fighters are held in high regard and for good reason.

Back stage Lubena and coach, the awesome Ruth Ashdown (who faces Lena Ovchynnikova in the States in a couple of weeks) were extremely welcoming whilst being extremely focused on preparations. Lubena’s shadowboxing is very graceful and worthy of note!

We have been told that Bekie Hodge hits like a train, and we can confirm this after feeling the loud thuds from her kicks dent the air in her warm up with coach Lee Powers. She appeared to have some nerves pre-fight, which is understandable on taking such a huge fight at short notice.

The first two rounds appeared quite even with Lubena’s movement and technique being a little sharper. Round three was also close. Lubena appeared to hurt her leg (although she hid it well), we’re not sure if it was a kick from Bekie, or if her own leg had clashed with an elbow. Either way it didn’t hinder her. Throughout the fourth and fifth rounds Bekie seemed to tire and was breathing heavy. Lubena kept up the pace and sharp movement, and started to leave Bekie behind.

Lubena won by unanimous decision, which we feel was the right decision although it was closer than that might suggest. We would love to see these two in a rematch, so fingers crossed someone will make that happen!