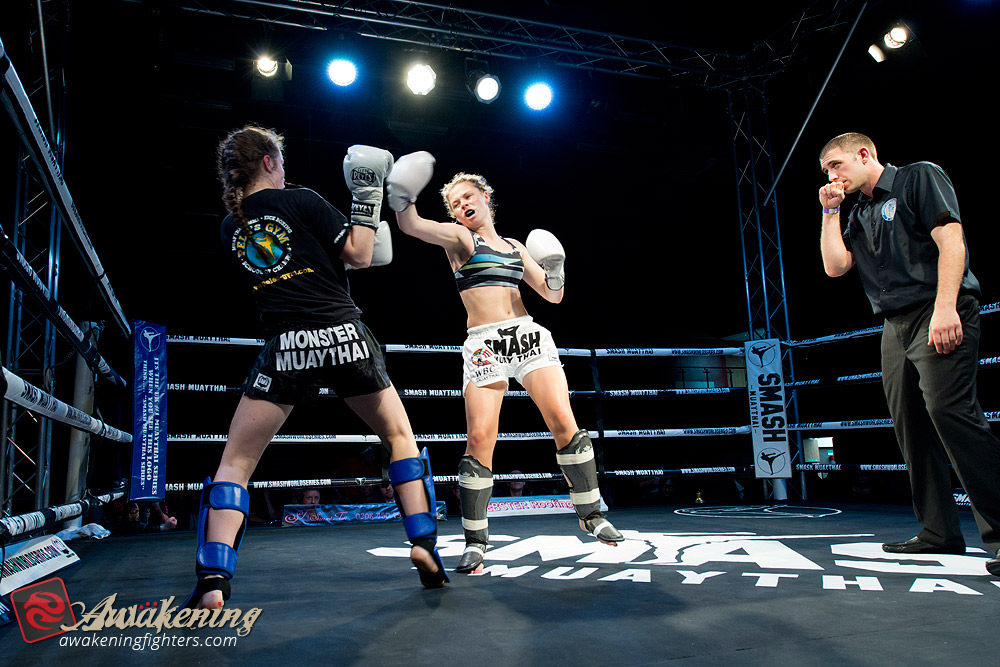 We travelled this past Saturday to Smash Muaythai 9 in Watford, UK, to see two fights: The WBC title fight between Lubena Jane Iske and Bekie Hodge (covered in this article), and the other female bout on the card between Amber Kitchen and Niamh Kinehan. For fight fans, we can recommend going to Smash 10 – these guys put on a good show.

The first female fight, which was last on the undercard, was Cornwall’s Amber vs Manchester’s Niamh in a 60kg C-Class bout. Amber’s original opponent had been Bee Kolcak who had unfortunately pulled out two weeks prior due to an injured wrist. The calibre of these three young girls (15) is undeniable and they will each go on to international fame in a few years, there’s no doubt about that.

There was an unfortunate issue at the weigh-ins between the two camps that we witnessed. We feel it should be briefly mentioned in an effort to maintain safety within the sport. It appears there had been a miscommunication with the fight weight prior to the event, as one camp had been told it was at 60kg and the other camp at 61kg. This ended up translating into a 1.2kg difference between the two girls. Granted, this isn’t that great but such slip ups should avoided for safety reasons – especially with the junior fighters. We also feel proof of age should be supplied with all junior fights as another standard. We can confirm that we have seen proof of both fighters age.

As “go time” neared we spent time with both girls back stage and each girl seemed relaxed and ready. We have worked with Amber before as some of you will already know, so she took the presence of our camera in her stride. Back stage with Niamh was slightly different, she’s was shy at first but let us do our thing, we think we got some great shots of her! We’d like to thank both camps for being good to us and letting us be a “fly on the wall”, or “put a camera in your face” however you want to put it.

We were really excited about this fight. It was Amber’s first head contact fight and at a big event such as Smash we were surprised at how she was taking it all in her stride. Niamh had previously had 3 head contact fights and also didn’t seem stressed at the occasion one bit. In terms of reporting on how the fight went down, there isn’t really much to say as Amber retired at the end of the first round. Amber had landed a few kicks, and a couple of them had been caught. One catch was followed by a nasty sweep leaving Amber crashing heavily to the ground. Niamh was clearly the more dominant, stronger opponent, and had landed two or three heavy punches which had caused Amber real issue. We were disappointed to not have seen these two fight for longer, but in hindsight the retirement was a wise move on this occasion.