Last night saw a pivotal moment in WMMA, as global eyes watched UFC 157 with bated breath to see how Dana White would showcase the organisations first ever women’s bout. Ronda Rousey vs Liz Carmouche was placed as the main event, and was for the Women’s Bantamweight World Champion title. In the co-main event spot was Lyota Machida vs Dan Henderson. If social media is anything to go by, there was certainly a large proportion of the UFC’s audience that felt it was a joke to have a women’s bout on a UFC card, let alone for it to trump a match up like Machida vs Henderson. It’s worthy of note that the majority of the UFCs audience were not even aware of female fighters before the run up to the event. Those of us that know the women’s MMA scene knew exactly what kind of fight it would be, and that this match was always going to be an incredible fight worthy of the status given to it by the UFC.

One of the Awakening teams male family members is a good gage of how the climate is changing. He has been a die hard fan of the UFC since it’s very beginning and is openly against female fighting. He often says things like…

“It’s ridiculous, women fighting? UFC157 is going to be a flop, I’m not going to bother watching it. They’ve ruined it”.

You don’t need to tell us how out dated that sounds. It’s amusing isn’t it. Unbeknown to him, he is actually our Awakening Guinea Pig so we can keep an eye on the general progress of the female fight scene as seen from the eyes of your average male close minded fight fan. Well good news! After last night he’s now eaten his words and has been shown the light! 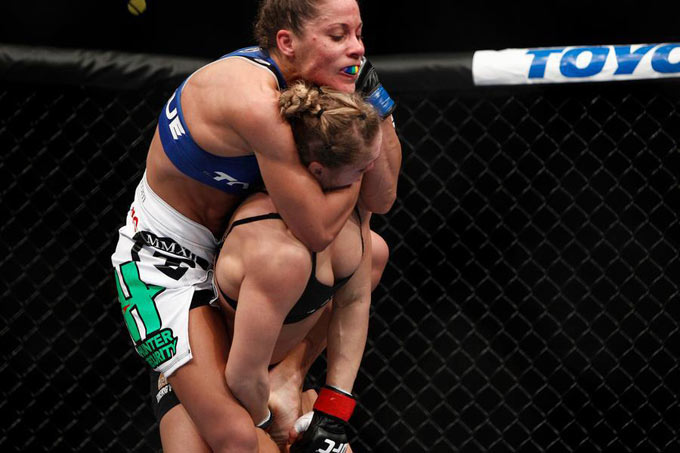 We are so excited about the possibilities that we’ve hardly mentioned the fight itself. It was surreal to say the least. The Machida vs Henderson fight ended, and up flashed the tale of the tape graphic for Rousey vs Carmouche. It started to sink in the moment Mike Goldberg began his usual loveable stat dissection. From the moment the ladies entered the arena they did the industry proud, they deserved to be there and their demeanour echoed it. Joe Rogan’s enthusiasm fit the scene perfectly and this was topped off by the legendary tone of Bruce Buffer bellowing out the fighters names.

Rousey and Carmouche met in the center of the Octagon and squared off, they both looked more than ready to show the world that female fighters are every bit as serious as the men. If you took every goose bump on every fans body at that moment in time, I wonder how many time around the earth you could stretch. The supporters of the women’s game would have been poised for an incredible fight, and the non-believers would have been begrudgingly watching on ready to see it be a waste of time. Big John called “Fight!” and it was on. 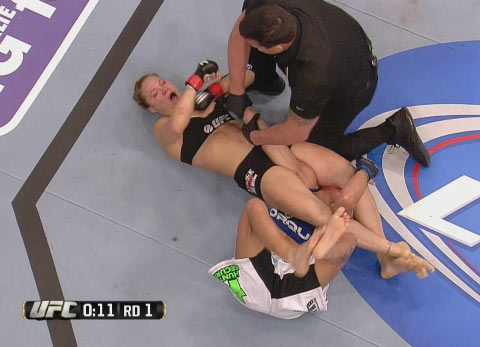 All Carmouche had to do was keep Rousey on the outside and be the first to test her chin, let Rousey get close and the fight would be as good as over. Many people (including us) believing it would be another fast first round victory for Rousey. Within the first few seconds, after a flurry from each fighter, Rousey closed in and got hold of Carmouche. Suprisingly within another few seconds Rousey found herself the victim of a very nasty looking neck crank. It looked enough to finish most fights but Rousey battled through it, her face as purple as a beetroot. This first minute alone must have made all the non-believers wake up. The remainder of the fight took place on the ground, Rousey taking her time and Carmouche valiantly battling. Eleven seconds from the end of the first round Rousey pulled out the armbar and Carmouche wisely and quickly tapped, stopping her from becoming another gruesome highlight finish. 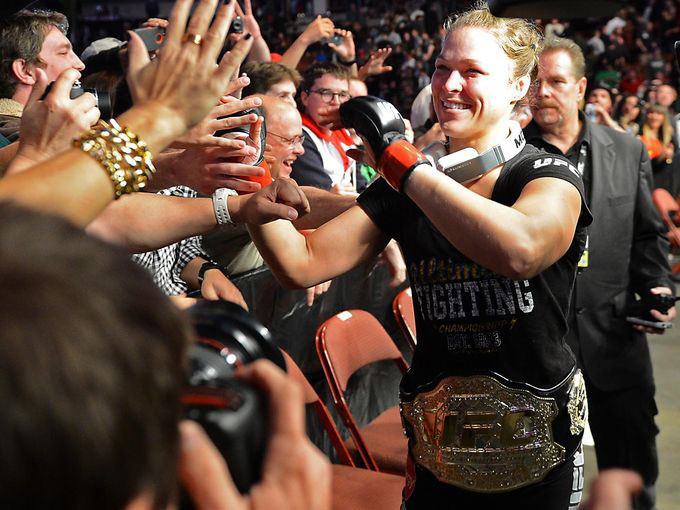 Carmouche was Rousey’s greatest test to date, and almost had her with that nasty neck crank in the first minute. In the end Rousey added another impressive first round armbar to her list and both fighters did the scene justice.

It would be interesting to see the conversion rate of non-believers after this historical and incredible fight.