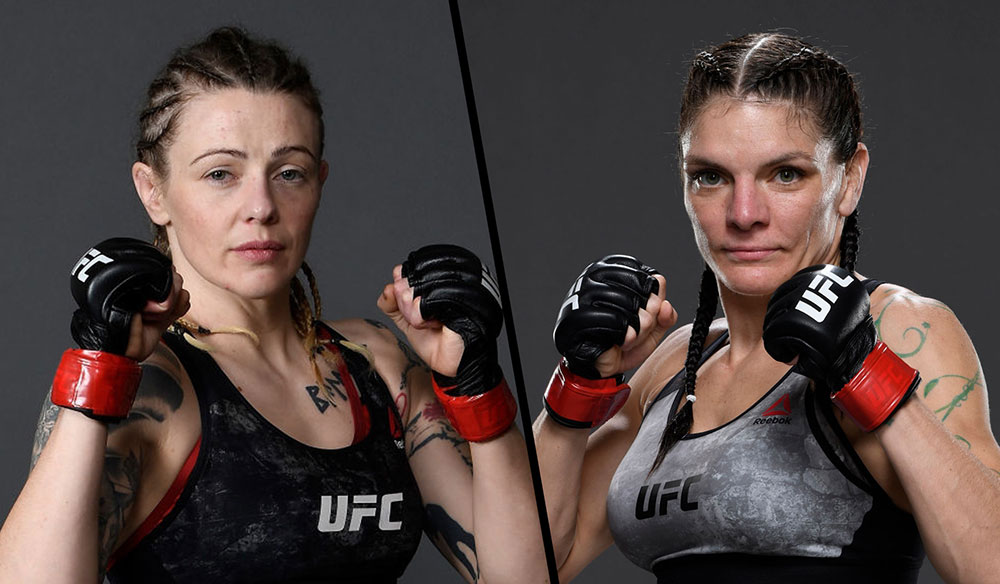 Fight fans have a huge bout to look forward to in the women’s Flyweight division next month, as contenders, Lauren Murphy and Joanne Calderwood get ready to face off on June 12th.

The two will meet on the undercard of UFC 263 at the Gila River Arena, with the victor expected to move on and earn a shot at the full UFC title. The two fighters share very similar records in Mixed Martial Arts, with Murphy having 14 wins and four losses to her name, while Calderwood has 15 wins and five losses overall.

While this certainly isn’t the last chance saloon for either fighter, it does seem clear that the loser will have a long road back to a potential title shot – which is made all the more complicated by their respective ages. Murphy is 37, while Calderwood is two years her junior at 35, meaning that neither can really afford to take a backwards step at this stage in their careers.

A winner of four fights in a row, Murphy is on a hot streak that could very well lead to a title shot – if she can secure one final victory against Calderwood. Murphy is currently ranked at number 3 in the UFC women’s Flyweight division, while Calderwood is down at number 6.

Calderwood has gone 2-1 in her past three outings, which did include a solid victory over former title contender Jessica Eye last time out. She has actually previously earned a title shot, capitalising on an unfortunate injury to reigning champion Valentina Shevchenko to face Jennifer Maia in a showdown in August of last year.

That championship attempt ended in a crushing submission defeat, but fresh from a morale-boosting victory against Eye, hopes are high that Calderwood can go one better if she gets a second shot at the title. Heading into the contest against Murphy, most bookies have it dead even – adding to the obvious intrigue. Click here for all of your UFC betting needs ahead of an exciting month of MMA action.

One more victory for either fighter will likely land them a shot at UFC gold, meaning the stakes simply couldn’t be higher heading into next month’s clash. Murphy v Calderwood is not the only female fight we will be able to see at UFC 263, however. The early Prelims will provide fans with two contests in the Women’s Bantamweight division – contests with potential title implications.

First up, we have Pannie Kianzad taking on Alexis Davis. It’s an especially important fight for Kianzad, as the Swedish brawler is currently ranked at Number 11 in the UFC’s official Bantamweight rankings. While she is expected to overcome the test of Davis (20-10), the experienced Canadian certainly won’t be a pushover, having defeated highly-rated prospect Sabina Mazo back in February of this year.

In addition, fans will also be treated to a true ‘pick’em’ fight in the form of Sijara Eubanks vs Karol Rosa. The two contenders are ranked 13th and 14th respectively by the UFC, with a win, either way, likely to propel the victorious fighter into the top 10. Naturally, any fighter that wants to get near the UFC women’s Bantamweight title will first have to get past the fearsome and formidable Amanda Nunes. The Brazilian is the reigning Bantamweight and Featherweight UFC champion, having won each of her last 12 MMA fights. Her last contest was a submission win over Megan Anderson back in March, with Nunes yet to be given her next official fight date.

Murphy and Calderwood are competing in a similarly stacked division, one which has been under the spell of a dominant champion for some time now. The queen of the women’s UFC Flyweight division is currently Valentina Shevchenko, the Kyrgyzstani fighter with 21 MMA wins to her name.

After convincing victories over the likes of Jessica Andrade and Jennifer Maia, whoever does win out of Calderwood and Murphy will have a mightily difficult task if they do wish to get their hands-on UFC gold. Two of Shevchenko’s three defeats came against Nunes in a higher weight division, which just goes to show how impressive the 33-year-old is; as she has despatched pretty much every other fighter she has faced – including former UFC champion Holly Holm.

Overall, we are set for a fantastic month of June, with three UFC fights set to take place that could all have huge implications for the women’s Bantamweight and Flyweight divisions. Let’s hope that each of them delivers, and manage to put on a spectacular show for the watching world.