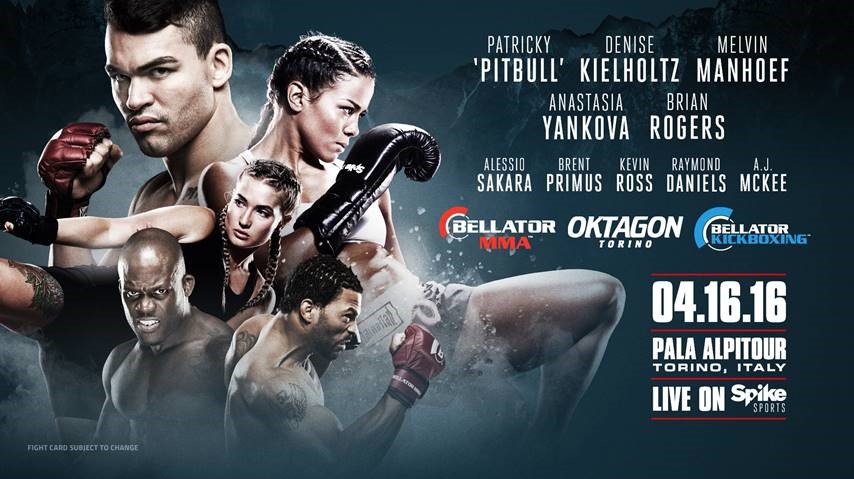 Earlier today in Houston, TX at the Bellator 149: Shamrock vs Gracie press conference, Scott Coker the promotions President announced the launch of "Bellator Kickboxing". The first event will be a co-promoted show with Oktagon Kickboxing, one of Europe's largest and most respected promotions. If you're lucky enough to live in or near Torino, Italy make sure you mark off April 16th on your calendar and head over to the Pala Alpitour!

Bellator are calling the show a "Kickboxing Mega Event" due to its inclusion of the Bellator 152 MMA card. The only confirmed female fighter for the kickboxing card is Holland's Denise Kielholtz, with her opponent being announced in the near future. Anastasia Yankova from Russia is confirmed for the additional MMA card, however her opponent is unclear. USA's Keri Melendez was also in attendance at today's press conference, but we are currently unclear if she will be on either card to be held in Italy.

The Bellator Kickboxing event's headliner will feature Melvin Manhoef vs Alexandru Negrea as well as a 5-round title fight between Mustapha Haida and Karim Ghajii. Bellator will also be finding matches for Kevin Ross and Raymond Daniels. The MMA card will also feature Alessio Sakara vs Brian Rogers, Patricky “Pitbull” Freire, Brent Primus, and A.J. McKee.

Their move into Europe is exciting news for the sport of kickboxing, especially considering Bellator's track record with female fights and we can't wait to see their inaugural event.

“Kickboxing is a thrilling, non-stop action-packed sport that I believe will resonate with MMA fans,” said Coker. “Our first goal is to develop stars and showcase these incredible athletes on the #1 home for combat sports, Spike TV.”