It’s unfortunate news and really not something we’re happy to announce. Many fans, and indeed the entire Muay Thai community were waiting in anticipation to see Jorina Baars defend her Lion Fight Welterweight Title this Friday at Lion Fight 18. She was set to face Anke Van Gestel, an excellent young fighter from Belgium who is relatively unknown outside of Europe. The fight is now off due to a last minute contract disagreement between Lion Fight and Baars’ camp. Exactly what the disagreement was is unclear at the moment as Lion Fight have yet to announce their side of the story. 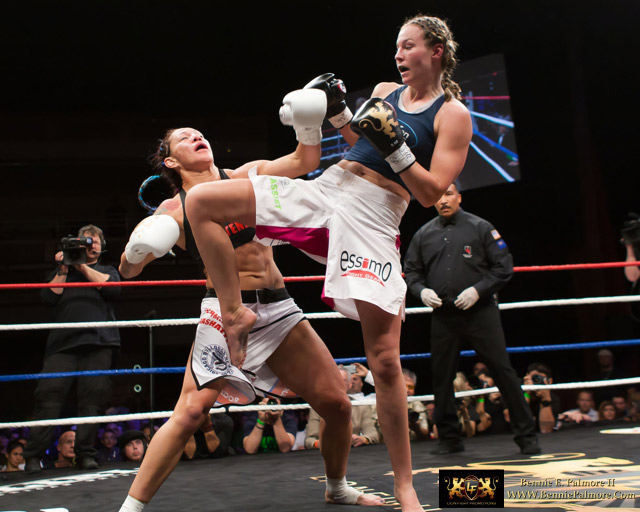 No Fight for me this friday 🙁 pic.twitter.com/hTtDJbMYJQ
— Jorina Baars (@JorinaBaars) September 1, 2014

In a Dutch article she made a comment, a comment that we translated with google translator and then checked with Jorina herself…

"Last week I suddenly got a new contract sent, I had to send it back. I signed it quickly. When we viewed the contract content, it revealed that it unwrapped unfavourable for me. There were some things in the proposal that I could not agree. Certain requirements which I could not meet. They put me under pressure so shortly before the scheduled fight. I will not be pressured"

We commend Jorina for being at her level and standing her ground on a contract issue. This kind of dispute will happen from time to time and it’s unfortunate for fight fans everywhere. Lion Fight will no doubt also be very unhappy that this could not be resolved in time for the show. It’s such a shame! Jorina sounded disappointed when we spoke to her, and she told us that she had trained so hard.

The fight community will have to wait a little longer to see their new star Jorina in action again. Let’s hope that Anke Van Gestel gets another chance to visit the States and show what she’s made of.

Lion Fight 18 airs at 10pm on AXS TV this Friday, although this epic fight is now off, don’t let that stop you from watching the show.