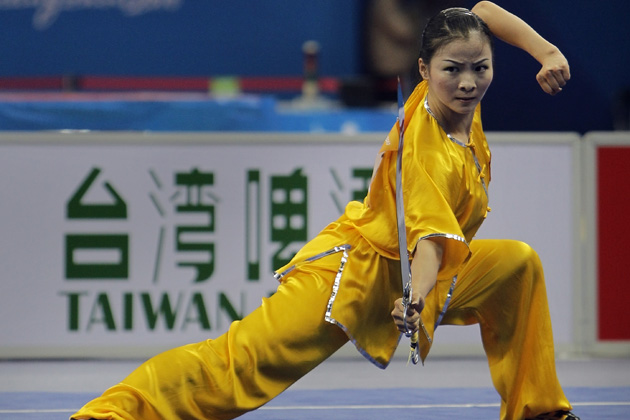 Wushu is the offspring of ancient Chinese martial arts and its techniques comprise different traditional combative fighting styles. It is the outcome of continuous efforts taken by different institutes to bring various martial arts under one roof. The efforts had begun since as early as 1928 when Central Guoshu Institute was established in 1928 at Nanking. It is often considered as a twin of Kung Fu, only that it is a more spectacular event and a full-contact combat sport.

The art which is a blend of various martial arts was deemed fit to be called simply a ‘martial art’. This is what ‘Wushu’ in Chinese translates to:

Unification of different fight forms had long been thought worthy of a try and by 1958, with government efforts, All China Wushu Association was formed to regulate the training of the martial arts. During this period scripts were written defining the training curriculums, the standard forms, and other instructions. The dynamic art of Wushu was given a further boost when it was introduced at high school and university levels. Various forms and styles were incorporated and they implemented soft, hard, external, and internal concepts. Ideologies and techniques from schools like Shaolin, Wudang, Taiji, and others were also brought together under one umbrella. In 1979 the martial art got further patronage when a special task force was created by the ‘State Commission for Physical Culture and Sports’ to spread the teachings and practice of Wushu. Later the Chinese National Research Institute of Wushu was formed in 1986 to carry out the administrative and research work of this combat art.

The changing times and indifferent government policies lead to the closure of the State Sports Commission, the central sports authority, in 1998. To keep up with the new sociological aspects of China and to keep the spirit of the art alive, both in its traditional and modern styles, the task was entrusted to the ‘International Wushu Federation’ (IWUF). And it accomplishes it by organizing World Wushu Championships every 2 years. The event was held for the first time in Beijing in 1991.

There are two different distinctive forms of Wushu competitions which are organized, one being ‘taolu’ (forms) and another being ‘sanda’ (sparring). Taolu is coordinated imaginary predesigned movements that exhibit how to fend off any imaginary attack. The competitions have either preset routines which practitioners have to execute, or they can be self-created maneuvers of the practitioners. Points are awarded according to the eligible difficulty level.

Wushu competitions also feature dual events called duilian, which can be performed by sparring with weapons or without them, but they can be fought barehanded as well. The dual events offer some spectacular acrobatics to watch as their maneuvers are well choreographed. There are also group events called jiti, where groups of people perform in a synchronized manner with music playing in the background.

During the second half of the 20th century lived a classical contemporary Wushu fighter named Zhao Changjun. But with Jet Li also being in the arena during those times, it was the situation of two swords and one scabbard. At the 1978 Men’s Long-fist competition, Jet Li was better than Zaho Changjun and secured the first place. It was a close affair, and Zhao’s slightly-off pinkies were blamed for him losing the gold medal.

After Jet Li chose the movie world as his second career, the field was wide open for Zaho Changjun to rule to roost, which he did in national Wushu competitions during the 1980s. He was proficient in contemporary and traditional Wushu, as well as in Daoshu, Ditang Quan, and Gunshu. These techniques were termed as ‘Zhao’s Three Unique’. Apart from them, Zaho Changjun had another fighting art in his arsenal, Cha quan, which is a traditional Muslim Wushu art. Carrying on his romance with Wushu even after his retiring in 1987, he opened up a Wushu school.

Wushu beholds in-depth philosophical values and is based on deep human psychological and emotional factors. The techniques of Wushu are a treasure house of physical defense mechanisms. They are meant to keep practitioners physically fit, prevent illnesses and enable them to live a longer life. Wushu principles implore human morality and behavior and emphasize the need to make practitioners honorable and ethical. This set of values is a cultural treasure for the Chinese.

Ideally, a Wushu competition is conducted by a chief referee and 3 assistant chief referees. Also, there is a group of judges which comprises 1 head judge and 5-7 judges, which include scorer and time-keeper. Upon calling of their names for the competition, the participants begin the proceeding by greeting the head judge with ‘palm and fist salute’, and after the judge’s nod, the event begins. After the end of a bout, the head judge announces the winner based upon the point system, the highest score being 10 points. The quality of the maneuvers can fetch 6 points, while 1/10th of a point can be deducted for slightly incorrect coordination of movements and stances.

The movie world was often attracted by the fascinating Wushu world and Jet Li is one such example of this tendency. He was a skilled Wushu practitioner and held the title of National Wushu Champion of China. That was enough for him to be handed over the screen space in the movie Shaolin Temple, where he exhibited his martial art skills. Hence began his successful career in the movies.

Jade Xu is another name from the Wushu world which crept over to the glamour of the movie world. She became a celebrity in martial arts when she swept the World Championships thrice in a row. She also secured first and second place in the 2008 Beijing Olympics in the gun/staff and dao/broadsword respectively. Then the offers for roles in movies like Tai Chi O and Tai Chi Hero began pouring in and a successful Wushu practitioner was transformed into a successful actress.