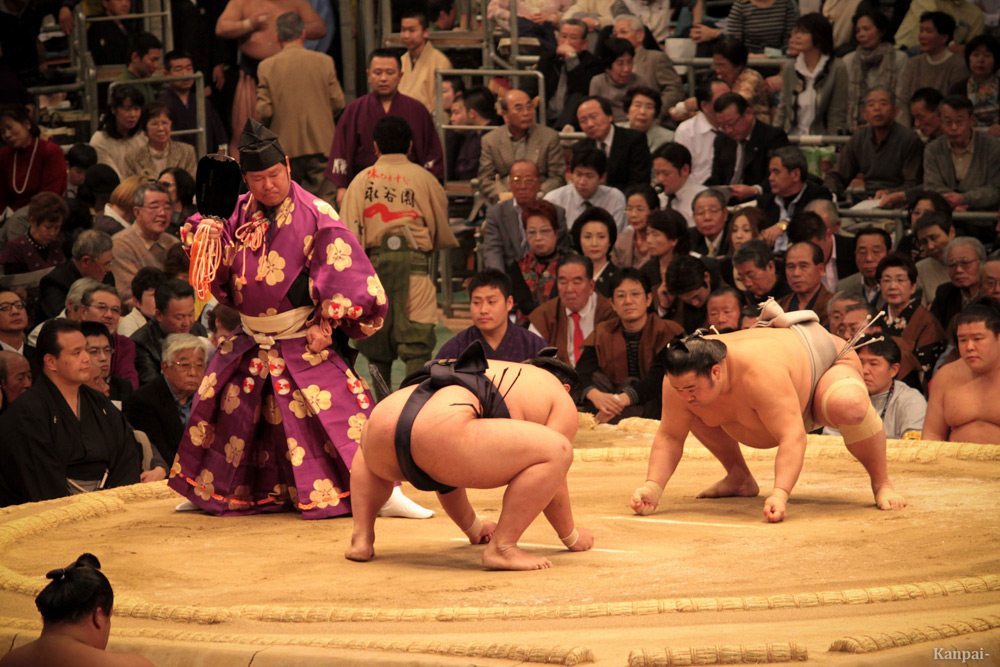 Sumo is reputed Japanese heavy weight wrestling technique. It originated in the period of Tumulus (250-550). However, there have been a lot of changes made to it in the later stages, especially during the 17th century. It was initially performed as part of worship during festivals to entertain gods. However, from the 16th century onwards there was a drastic change in the way Sumo was appreciated. With the passage of time, the its status was raised from being a violent entertaining sport to the national sport of Japan.

The word Sumo derives from Japanese language. Sumo means "to compete". A wrestler is called a Rikishi or Sumotori.

According to history the original traces of Sumo style wrestling were found 2000 years ago. During the period of Tumulus (250-552) it was only treated as a way of worshipping gods. From 8th century till the 11th century, Emperor Kanmu declared it a special yearly event to be performed in his court. Starting from the 11th century and until the 13th century, warriors often practiced Sumo together with other martial arts. Minamoto no Yoritomo, one of the shoguns which ruled during this era, was known to enjoy watching this spectacle. Historical records state than a huge a Sumo tournament, including more than 1500 wrestlers from whole Japan, was organized in 1578. During all these times, Sumo wrestling did not have any regulations or rules set. So, it was less of a competition and more of a violent sport.

During the 16th century, numerous regulations were introduced in order to ensure the safety of both wrestlers and present viewers. During this period, the strongest sumotori were highly respected. They were provided with generous stipends and special patronage. Eventually, a ranking system was introduced to inculcate a healthy competition among the wrestlers.

Today Sumo wrestling has spread its wings across the world. The first ever professional Sumo tournament was conducted in 1761. This professional version of the Sumo wrestling is called "Grand Sumo". There are six official Sumo tournaments which are conducted by the Japanese Government every year, in order to pay respect to this traditional sport. At the national level, the Sumo style wrestling is regulated and organized by Japan Sumo Association (JSA). Sumo wrestling coaches/trainers are called stable-masters. In year 2008, there were 53 stables (Sumo training centers). People often come to Japan from different parts of the world in order to enjoy watching national level Grand Sumo tournaments in their traditional setting.

It is believed that god Kami is very fond of Sumo wrestling. This is the reason why during the festive season, which is called matsuri, Japanese people often organized Sumo fights in order to please and entertain this god.

The fighting area is called dohyou and comprises of a ring covered in sand. Sand is believed to be a purifier which purifies both the location and the wrestlers. The referees in Sumo are still considered the same as priests, so they always wear traditional robes during competitions. Before the wrestling starts, the wrestlers jump up high in the air and stamp their legs back on the floor making a noise. It is believed that this practice will scare off the demons.

Yokozuna, the winner of 1969 Grand Sumo competition, stated that abiding to the gyoji (the referee) in Sumo wrestling is more important than winning the fight. It began as a sport meant for entertainment and later grew into an important part of the martial arts routing of warriors. Today, it is a national sport of Japan and Japanese take great pride in it.

The key philosophy behind this sport is purification. It originated from principles of Shinto Religion. Tara Magdalinsky stated that the essence of Shinto is the relationship between good and evil represented by pollution and purity. Impurities and evil are removed through ritual purification, and Sumo is considered to be a form of this cleansing.

Wrestlers fight in the circular area which is approximately 15ft in diameter. This circle is lifted by massive clay blocks and it lies two and half feet above the ground level. New Dohyou (the fighting ring) is made for every tournament. Five judges judge every fight and they are usually former rikishi. Any decision of the referee who is inside the ring is subject to objections of the judges. When an objection is made, judges will hold a consultation and the referee will view a replay of the action in order to decide whether the objection was valid.

When it comes to the wrestling, Sumo fighters are not burdened by many rules. There are two main principles. The first one states that none of the wrestler’s body parts, except for his feet, may touch the ground during the fight. The second one states that the wrestler has to ensure that he is not thrown out of the ring by the opponent. The first one to break one of these rules loses the fight. In addition, some techniques, such as the one called kinjite, are forbidden in the ring.

Sumo is not featured in movies so often, but it has been widely recognized in popular culture. The movie A Matter of Size is a feel-good movie which included notions of Sumo. Numerous blockbusters also included scenes of sumo fighting or mentioned the technique itself. Japan Sumo Association has teamed up with the directors of movie Thermae Romae II, a sequence to a highly popular movie in Japan. Famous Sumo wrestlers Taro Akebono and Kotoushuu Katsunori will be featured in this movie.