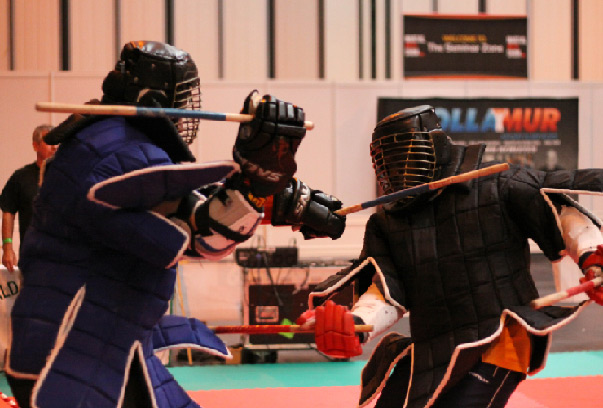 Stick Fighting is a term that refers to a wide range of martial arts which use simple, short, or long, blunt ‘sticks’ for fighting. Generally, wooden sticks are used and, depending on the particular technique, they differ in shape and weight. Some stick fighting techniques have been developed as defensive techniques. Others, such as Japanese Kendo and Indian Gatka, were developed as safe simulations of training with dangerous weapons. Some martial arts are completely dedicated to stick fighting, while others incorporate some of these techniques into their comprehensive systems. Some stick fighting techniques include those of Eskrima, Kali, Tang Soo Do, Kendo, Gatka and others.

The phrase stick fighting consists of two words. The word “stick” comes from Old English “sticca” meaning rod, twig, peg. It is thought that this word came from Proto-Germanic word “stikkon”. “Fight” comes from Old English “feohtan” of the same meaning, which was derived from Proto-Germanic word “fehtan”. Depending on the particular techniques of Stick fighting, names of different martial arts bear their own meanings.

Depending on the region, stick fighting has gone through different phases of development. It is a fact however, that stick fighting has been around since prehistoric times. Almost every culture that has been explored knows of the practice of stick fighting in some form. Some used it as a form of defence and attack during quarrels and wars, some used it as a practice substitute of real weapons, while some included different stick handling methods as a part of ritual practices. For example, intonga is a South African fighting technique which was practiced for centuries and was an important part of the cultural heritage of local tribes.(1) Donga stick fighting is practiced by the Surma people of Ethiopia, where it has been considered a way to show off one’s power when looking for the bride or defeating a competitor.

Europe also has its stick fighting counterparts and several techniques have been precisely described in manuscripts centuries ago. Quarterstaff refers to European fighting techniques which were mainly used in England as early as in the 15th century. Many of Europe’s old fighting techniques have died out, though some remained as folk-sports and self-defence systems. These include Jogo do Pau practiced in Portugal, Italy’s Scherma di Bastone and France’s Canne de Combat, which is still practiced as a competitive sport. Latin America has also developed several fighting styles, but probably the oldest and most famous stick fighting martial arts are those of Asia. These include Eskrima of the Philippines, which is known for its long tradition. China, Japan and Korea also developed comprehensive martial art systems that utilize sticks.

Although hundreds of different fighting techniques utilize sticks, some of these have gained huge popularity. Nowadays, practitioners are usually taught stick fighting moves together with other elements of comprehensive martial arts. Some of the most popular martial arts which often utilize sticks are those of Filipino Martial Arts systems, including Kali, Arnis and Escrima.(2) They are taught primarily for self-defence, but are considered crucial in any contemporary fighting arts defence system. Kendo, a Japanese martial art which descended from sword fighting, uses only stick (Shinai) in its modern form. It is extremely popular and practiced in many martial arts schools across the world.

Countless legends are connected with particular stick fighting techniques throughout the world. Many of them were transmitted orally, leaving much to the imagination of the storytellers. Eskrima, for example, was known as an art practiced by peasants and it is said that is was mainly used to solve internal conflicts for centuries. In Tahtib, ancient Egyptian stick fighting routine, women used dance and ritually fought with sticks wearing men’s clothes.(3) Portuguese Jogo do pau is believed to be influenced by old Indian dance and martial art techniques which later spread in the period of Portuguese colonisation. And some of the more recent folklore stories includes the French Canne de Combat, which developed in early 19th century as a form of self-defence of upper class gentlemen who lived in big, usafe cities such as Paris.

Rules differ in different stick fighting techniques. When used for self-defence, practitioners are not required to follow rules other than ones set by the moral code. For some sports disciplines, various rules may apply. When competing, most practitioners are required to wear protective gear in order to protect themselves. Although this may differ from discipline to discipline, rounds in stick fighting competitions last around two minutes. Most disciplines ban stabbing and hitting some areas. Points can be earned when a certain area on the opponent’s body is hit. In most disciplines, the participant loses when he steps out of the designated fighting area or drops his weapon.

While stick fighting covers a wide range of fighting styles, popular techniques often get a lot of screen time in popular movies, TV shows and games. For example, Eskrima is often featured in popular movies, such as The Book of Eli with Denzel Washington. Kendo is also often used in movies, including The Yakuza and Black Rain starring Michael Douglas.