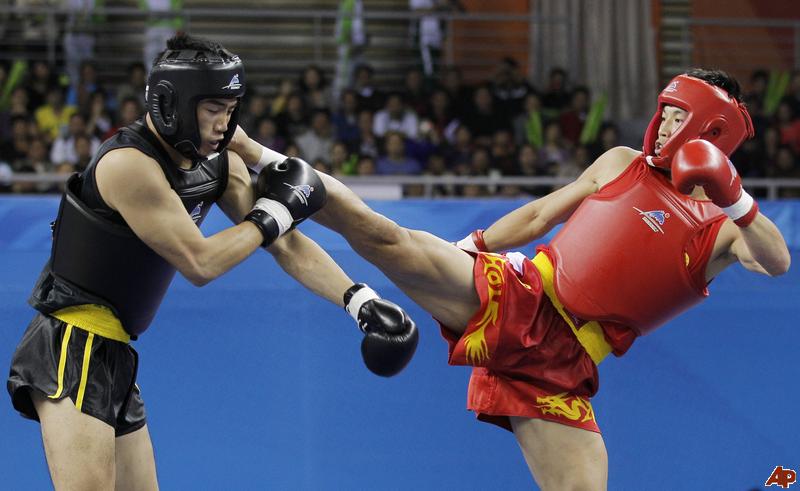 Junyong Zhang from China, right and Tuan van Nguyen from Vietnam during the men’s Sanshou 65kg final of the Wushu event of the 16th Asian Games. (2010) / Photo Source: News Hopper

Sanshou's evolution is remarkably apt. It turned into a combat sport from a military training. Like many other branches of martial art, Sanshou propagates its own brand of philosophy that merges self defense tactics along with the promotion of good health, fitness and well being.

The first understand this martial art one must look at the word "Sanshou". It's literal meaning is "free hand". The art itself is sometimes referred to as "Sanda", and the literal meaning of this is "free fighting", or "unsanctioned fighting".

The exact origins of this martial art cannot be deciphered as China fought in many battles for centuries. Evolving from its roots, Chinese martial art invoked different sects of philosophy and schools of thought. Its gradual evolution can be witnessed from turning from self-defense to health maintenance and self cultivation. Eventually, it broke from its bounds and escaped the circle of military, breaking through into other aspects of life as well.

What we do know is that this style developed majorly in the reign of the Song dynasty (960-1279 B.C.). At that time many tournaments were held and numerous prizes were awarded. In those times winners were made the emperor’s personal guards or teachers who would teach this brand of fighting. Today the prizes are awarded in form of money, popularity and belts.

To assess the martial art skills of the Sanshou warriors, several tournaments were arranged by the academies. Fought on raised stages called “Lei Tai”, these fights could be fought bare-handed or with weapons. This tradition has been practiced for many centuries in China. These challenge matches often proved to be very dangerous resulting in serious injuries or even lethal consequences in some cases.

At the eve of the Russo-Japanese war (1904-1905), Sanshou was one of the forms of Chinese martial arts to gain popularity. The reasons behind its development were the exceptional close-quarters-combat skills of the Japanese soldiers which gave them advantage over the Russians. This fighting style reached its pinnacle in 1924.

The spreading of Sanshou out of the circle of military resulted in the establishment of the Central Wushu institute in Nin Jang (or Nanking) in 1928. The fights taking place on Lei Tai were violent, thus a national Chinese tournament was held altering the rules of Sanshou fights. Participants competed in different modes that included fighting with long weapons, short weapons, Sanshou and Shuai Jiao (Chinese Wrestling).

Martial arts became a symbol of national pride during the Chinese Republic period, from 1912 to 1949. Sanshou started being openly taught and shortly after it became very common amongst the general populace. Many schools and academies were also opened while training manuals started getting published and distributed.

As Sanshou evolved and turned into a sport practiced on a large scale, the precautions increased. These now include gloves, head guards and body armor. It can be said that the Sanshou became modernized. Consequently, a list of rules was introduced in order to minimize the chances of foul injury. Some of the classical elements, such as punches, kicks, takedowns and throws did survive. However, the practice of knees, chokes, elbows, submission holds and joint locks was eradicated.

The sport’s popularity is quite evident looking at the steady increase of the number of participants in World and European tournaments since the first World Sanshou cup that was held in Shanghai in 2002.

Sanshou’s philosophy is based on application, as the literal meaning of its name is “Loose Hand”, or “free hand”. Generally, it can be called a “loose-hand combat”. Sanshou is considered to be a fusion of various different traditional Chinese fighting techniques. Its philosophy strives to combine self-defence mechanisms and health parameters, together with some essential philosophical principles common to all Chinese martial arts.

The difference between traditional and modern Sanshou comes down to the protective gear such as gloves, head gears, shin pads etc. The control and power relations in the sport are consequently greatly affected by these changes. Modern Sanshou exhibits more power, while tradition emphasized control and precision more. It is more of a formless system and is taught along with different Chinese styles that have their roots embedded in the Sanshou techniques. Sanshou aims to promote realistic fighting capabilities.

Sanshou also promotes quickness and fast moves and its rules are greatly shaped by this. Finishing holds, chokes and master locks are excluded from the rule book, as they were dangerous and also slowed the game down. Some of the classical elements, such as punching, kicking, takedowns and throws do survive in the modern day rule book though.

Sanshou builds upon the basic three ranges of fighting, i.e. kicking, punching and grappling. It adds a feel of realism to this artificial or constructed form of sports.

Points are kept during the course of the match, which is based upon the moves of effectiveness. In the end, the player with the most points wins. There are two rounds, each lasting for two minutes. If they do not result in a winner, then an extra third round might be played. One can also win by forcing the opponent off the stage or the ring, or by a more traditional way i.e. of knocking out the opponent.