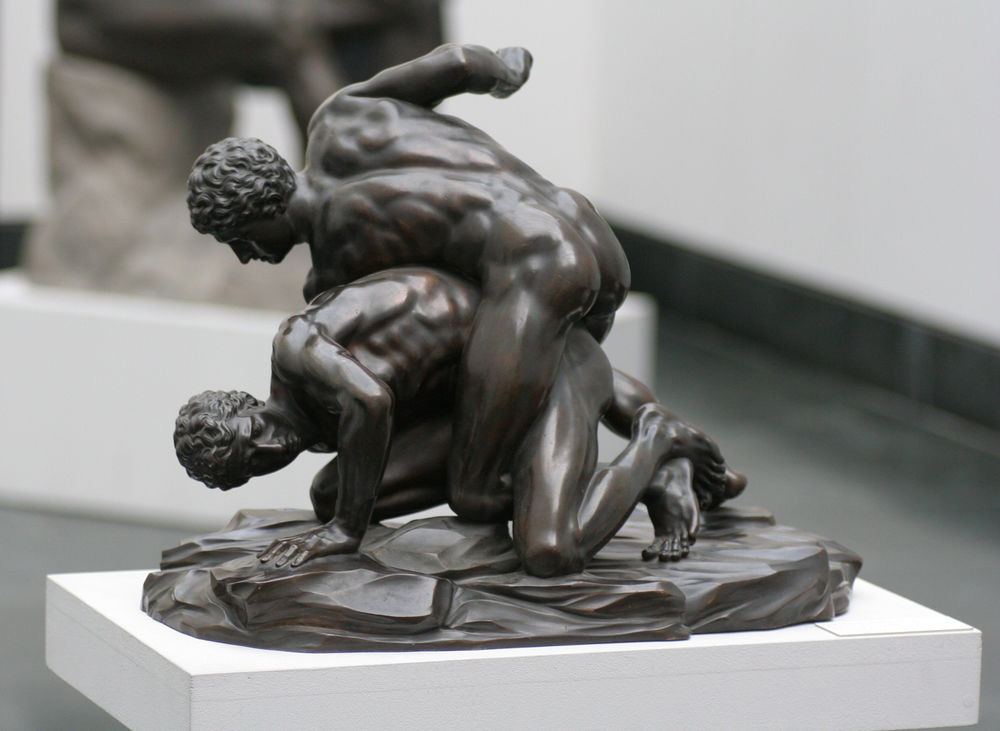 A couple of ancient Pankration fighters depicted in a sculpture. / Photo Source: Comicvine.com

Pankration entered the Greek games in 648 BC, combining the stealth and harsh blows of Boxing with the entrapping holds and locks of Wrestling. What set this sport apart from either Boxing or Wrestling was its lack of rules. Almost anything was acceptable during a Pankration match. Pankration was meant for the fighter to use all available moves and resources to beat their opponent, making it one of the most brutal forms of fighting in the ancient world.

Pankration originates from the Greek language. Its meaning is “all power.” It is a compound word beginning with “pan,” which means all, followed by the word “kratos,” which means might. Given the nature of the sport, the meaning in this context refers to having fighters use any means necessary to win.

Pankration became an event in the Greek Olympics in 648 BC in the 33rd Olympic Games. Boxing and Wrestling had already been in the games for several years. Pankration was said to be invented by the Greek gods, who used both Boxing and Wrestling techniques in their battles. It is also believed that as time went on, neither Boxing or Wrestling were violent enough for most spectators, creating a need for a more extreme form of combat. Pankration matches would only have two classes – men and boys. Other than that, there were no weight divisions. There were also no time limits. The match wouldn’t end until someone either submitted or was knocked unconscious. In rare instances, Pankration matches would result in one of the fighter’s deaths. This would be classified as a victory for the survivor. In only a short amount of time, Pankration spread from the games into other areas of Greek life. Greek soldiers would use Pankration techniques in battle against their enemies.

Since the revival of the Olympics in the late nineteenth century, Pankration is the only one of the original Olympic events that has not been reinstated. The International Olympic Committee has not recognized Pankration as an Olympic sport. The world was reintroduced to Pankration in 1973, when Jim Arvanitis, a Greek-American martial artist, appeared on the cover of Black Belt Magazine. Arvanitis had been practicing Pankration in the United States since 1969, but interest didn’t mount until the magazine cover. Since then, his style of “amateur Pankration” has spread and is practiced globally. The Japanese have an organization called Pancrase that is dedicated to Pankration-styled Mixed Martial Arts. With all forms of modern Pankration, there is more of an emphasis on safety and blending with different martial arts styles, making it significantly different than the Pankration practiced by the ancient Greeks.

The folklore involving Pankration stems directly from Greek mythology. The popular belief was that Hercules and Theseus developed Pankration, due in part to them using both Boxing and Wrestling when fighting their enemies. It was believed that Hercules used Pankration to take down the Nemean lion. It is also believed that he won the first Pankration competition in the Pythian Games. Hercules is frequently portrayed subduing the lion in Greek artwork. It was told that Theseus beat the monstrous Minotaur using Pankration. Despite the legends of Pankration in mythology, the gods were not the only ones who had legend thrust upon them. Former victors in Pankration events were believed to be invincible beings possessing superhuman strength and agility. Indeed, the feats that Pankratiasts were said to have accomplished during the games travelled across Greece, serving as inspiration for the whole empire.

The philosophy behind Pankration could easily be defined as “might makes right.” The objective behind the brutal form of combat was to defeat your opponent by any means necessary. Short of gouging and biting, anything was permitted. The most effective aspects of Boxing and Wrestling were employed to create the most enduring fight a warrior would have to go through. Pankration was considered a true test of a fighter’s combat skills because of how violent and potentially lethal it was. Because of this lenient policy towards rules and safety, Pankration had a much more nihilistic approach to combat than other fighting sports.

There were almost no rules in Pankration due to the fact that the sport was designed to be as violent as possible. A few rules did exist, however. For instance, biting and gouging were strictly prohibited. Some say the ban on gouging was introduced after an infamous match where the judges could not identify the victor because both fighters had gouged each other’s eyes out. There were only two classes in Pankration – men and boys. No time limit was set to a match. A fight was deemed over whenever someone was unconscious (or, in a few cases, dead) or when someone submitted. The act of submitting was indicated by raising the index finger.

Pankration hasn’t received the same level of attention as other forms of martial arts, but it has made appearances in popular culture. The sixth episode from the first season of Human Weapon is devoted to outlining the techniques found in Pankration. Modern films like 300 depict combating warriors using techniques and methods that, if not Pankration, were clearly influenced by Pankration. Although there is a lack of popular fiction regarding the sport, there are hundreds of instructional books and DVDs detailing the mechanics of Pankration and how to put them to use. One of the most popular instructional DVDs is Secrets of Pankration with Jim Avanitis.