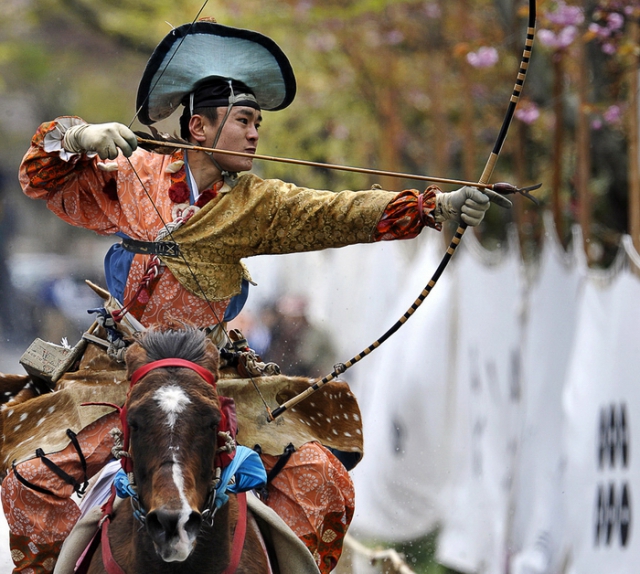 Mounted combat is the act of fighting while riding a horse. Horse riding during warfare has been practiced by almost every civilization in history. From knights to Bushido warriors, the use of horses is common in all cultures. Riding fighters gained distinct advantages over foot soldiers; they were difficult to hit and had an elevated height. Weapons used in mounted combat are varied: from sticks to knives to swords to guns, horse riding soldiers used any weapon possible while fighting.

The term “mounted combat” is a compound term that describes fighting on horseback. It comes from the words “mounted,” meaning to rise or ascend, and “combat,” meaning a fight or struggle. Warriors who engaged in combat while mounted to a steed have received different titles, all of which are based on the location and era that they came from.

It is difficult to state the exact beginnings of mounted combat since so many different cultures have used horses in warfare. Some speculate that the earliest examples can be seen in regions such as Europe, the Middle East and Asia. It is predicted that the practice of horse riding in combat goes back thousands of years. Some of the earliest users of mounted combat were the Assyrians. Their use of horses during warfare dates back to around 750 B.C. Eastern cultures such as the Sarmatians and Avars were known to use horses during warfare, as were western cultures such as the Greeks and Romans. Several forms of fighting have emphasized the use of horses in combat. For instance, in Ninjutsu, horsemanship or batjutsu is one of the eighteen skills necessary to become a ninja. Because of how common the practice of mounted warfare was, it is difficult to say which country or region it developed in, however, it is estimated to be at least 5,000 years old.

The practice of mounted combat has been severely limited, mostly due to advancements in weaponry and warfare. Most soldiers don’t need to ride a horse into combat when they can fly a jet or ride in a tank. However limited it may be, there are still instances of mounted combat. Horse riding police officers still use mounted combat when they have to control a crowd. In terms of one on one combat, the practice is most commonly seen with jousters reenacting medieval times. Many countries still reserve mounted cavalry for ceremonies and traditions. Equestrian events, such as sports or games, are still practiced using many of the same combat techniques that have been around since ancient civilizations started using horses in warfare.

One interesting folk story involves a legendary horseman in Sri Lanka. In the long-lasting war between King Dutugemunu and Elara, there were ten giant warriors who fought for Dutugemunu. According to regional folklore, one of the warriors was named Velusumanna. He was the best mounted soldier in Dutugemunu’s army. In his younger days, he was able to tame and ride a steed known for never allowing a human to mount him. According to the folklore, after the steed was tamed Velusumanna rode him in circles at such a fast rate that it appeared to be an entire posse was riding in the circle with him. At one point, Velesumanna even rode into enemy territory and purposefully had the enemy’s military head chase him. Velusumanna created enough dust to blind his pursuer, at which point he held out his sword and decapitated him.

There are two main philosophic branches associated with mounted combat – Chivalry, for the knights of Europe, and Bushido for Japanese samurais. Chivalry emphasized courage, independence and altruism. It involved a strict code of conduct that all medieval knights were sworn to uphold. Bushido focused more on allegiance, the mastering of skills and honor. Honor was especially important to the samurais when it came to their own deaths. Though these philosophies differ in their priorities, they both required years of training and strict adherence to the values that they represented. Both knights and samurais were considered the top warriors of their locations and riding horseback was necessary for battle and living.

Most forms of mounted combat don’t have rules, considering that most mounted combat took place during war. Even though Bushido involved a strict set of ethics, not much is mentioned in terms of rules. That’s not to say there are no rules in mounted combat. Jousting, the competitive mounted sport between knights, has quite a few rules. Though the rules are different for each state, they do tend to have a common theme. Here are some of the most important among them:

Mounted combat has been seen in many forms of popular culture. For instance, the 2001 movie A Knight’s Tale contains several scenes depicting knights in the act of jousting. The 2003 movie The Last Samurai depicts several instances of samurais riding and fighting on horses. In the classic 1941 movie They Died with Their Boots On, General Custard and his cavalry are shown riding on horses and engaging in mounted combat with Native Americans. Published in 1605, Don Quixote by Miguel de Cervantes depicts scenes of mounted combat with what the protagonist believes are giants. The giants were actually windmills.