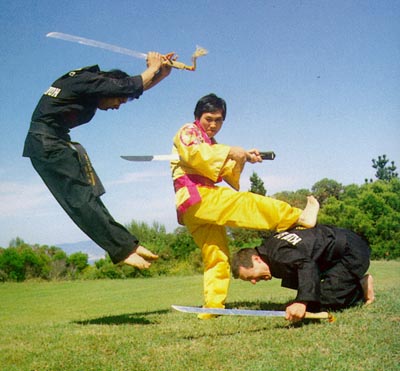 Kuk Sool Won is a comprehensive Korean martial arts system founded in 1961 by Suh In Hyuk. It was founded as a complete system and is not limited to a single discipline. The goal of Kuk Sool Won was to create an elaborate study of different traditional martial arts of Korea, including their fighting techniques, weapon training skills and mental development methods. Today, this discipline is taught around the world and its students cover a wide range of different fighting styles.

The name of this martial arts system consists of three words. ‘Kuk’ translates to nation or state. ‘Sool’ means martial arts technique. The word ‘sool,’ however, covers a wider range of meanings, including the spiritual and philosophical heritage of Korean martial arts. And finally, ‘won’ means institute or association.(1) Therefore, the name of this range of techniques could be translated as “National Martial Art Association”.

The roots of Kuk Sool Won date back to early Korean history. The art relies on three old techniques - the Sah Doh Mu Sool, Book Kyo Mu Sool and Koong Joong Mu Sool. The precursors to many techniques used today can be found in the tribal martial arts of Sah Doh Mu Sool, which were widely practiced by many families in old times. Book Kyo Mu Sool dates from the time of the Kingdom of Koryo, when Buddhism was introduced to the Korean peninsula. Buddhist monks taught specific martial systems, paying more attention to self-defence, meditation and breathing. Finally, Koong Joon Mu Sool was the art of the Royal Court, used by the royal guards. Development and practice of Korean martial arts were in jeopardy after Japan occupied Korean in 1910. Many traditional customs of the peninsula were suppressed at the time, so martial arts were practiced only in small circles.

The present form of Kuk Sool Won was formed only recently, in 1961. Its creator, master In Hyuk Suh, spent more than fifty years practicing various forms of Korean martial arts. He collected and organized more than 3,600 techniques which comprise Kuk Sool today. Hyuk Suh started learning martial arts from his grandfather at the age of five and was later introduced to Buddhist techniques and methods of the Korean Royal Court. He was known for his eclectic approach and excellent knowledge of different styles which he included in Kuk Sool Won. After founding the “National Martial Arts Association” in Korea, Suh came to America and formed the World Kuk Sool Association in 1975.(2)

Today Kuk Sool Won is Korea’s second largest martial art next to Tae Kwon Do. It is taught around the world to practitioners of all ages. The World Kuk Sool Association has its headquarters in Houston, Texas and has more than 1.3 million members. It also includes more than 800 member schools from 27 different countries. The Association hosts numerous tournaments every year, mainly in Korea, US and UK. These test different aspects of Kuk Sool Won techniques and often include demonstrations and belt promotions.

Sources on In Hyuk Suh sometimes include contradictory facts. Although it is accepted that Suh studied Royal Court Martial Arts techniques under his grandfather at a young age, he did not mention this in his first published book. He did mention this fact only in 1988 in his book Fighting Weapons of Korean Martial Arts.

He studied under many masters in different parts of Korea. Some state that he also studied under masters who practiced the Japanese Daito-ryu aikijujutsu system. It is also known that he had associations with the members of famous Hapkido Schools in Seoul.

Made from a woven fabric tape backed with a zinc oxide and latex adhesive. Dimensions: 10m long x 3.8cm wide.

Ideal for clubs, adding a patch to your gi or an addition to your collection, the embroidered Korea badge can be sewn or ironed on.

Suitable for many Martial Arts disciplines or those wishing a change from their normal club colours. Made from polycotton.

Large-volume 100% polyester sports holdall designed for those regularly transporting equipment to and from a destination.

Simple piece of equipment to use, pull the middle bar towards you and hold position for as long as necessary.

The Blitz Aluminium Training Fan is made from a strong and durable aluminium skeleton with a black nylon taffeta cloth.

A compact, multi-functional First Aid Kit consisting of everything you need to clean and dress minor wounds, injuries and sprains.

Kuk Sool Won is known to be an elaborate system of various fighting techniques and philosophical principles. It is considered a “hard-soft” system that includes flowing moves that please the eye, but also do much harm to the opponent. Kuk Sool Won uses soft and circular movements to redirect an opponent’s balance and equilibrium and then applies counter techniques to joints and special pressure points.(3) The system also stresses self-discipline, loyalty, humility and respect for others. Apart from elaborate fighting styles, practitioners also have to practice mental well-being and develop traits of calm and self-assured martial artists.(4) This includes studies of elaborate breathing techniques and the development of internal power.

Every practitioner should obey basic rules of etiquette in Kuk Sool Won. One has to take shoes off before entering the practice area. Moreover, practitioners have to keep their uniforms in a good state – always clean and tidy. All fighters have to bow to each other and their teachers. Every practitioner’s uniform includes a belt which indicates his rank. Geup grades are used for student levels, while Dahn grades denote experts. At black belt there are ten levels which require exceptional mastery. The rank of 1st degree Black Belt could take from 4 to 6 years of practice. During competitions, participants are judged on a 10-point scale by three judges. Scores given by judges are added together to determine a winner.

Kuk Sool Won features numerous techniques and many of these are often included in movies and TV shows. The system itself got featured several times on the popular Korean MBC network, including the show called “Kuk Sool Coming to America”.(5) Masters of Korean martial arts sometimes star in fighting scenes of popular movies, such as the legendary Best of the Best.