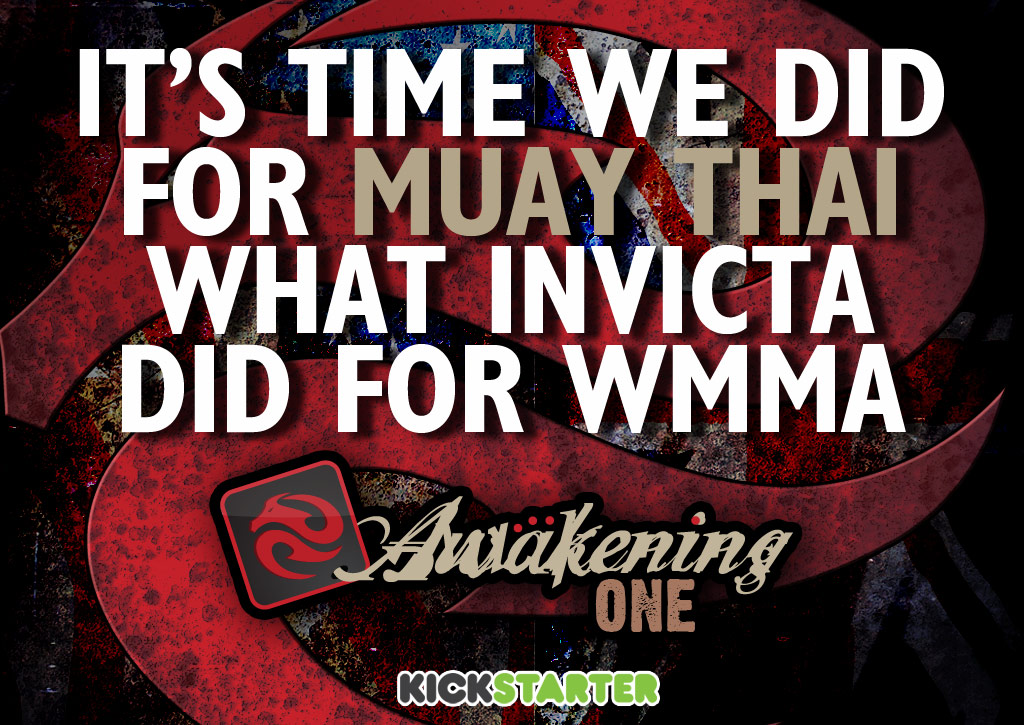 For anyone that has been following the progress of our kickstarter campaign, this article might be an interesting read for you as we take a look at and rectify our mistakes, some crazy statistics and discuss the exciting path that we're on.

Four days into the Awakening One campaign and admittedly the pledges aren't coming in as fast as we imagined they would. We thought we better find out why, it's still in an early stage of the campaign and we might be able to rectify the issue. What better way to find out than asking the female muay thai community in Rosy Hayward's Facebook Group, some 7,500 members strong. The thread is still there to be read but we'll give you an abridged version of what we wrote. We expressed that we wanted feedback on the campaign, and that we were utterly baffled why it wasn't gaining momentum in the form of pledges.  We have received literally hundreds of positive messages from around the world stating how great it is that we're trying this. The campaign itself has been shared a crazy 1,293 times, we all know that something needs to be worthy for us to share on social media with our friends. So in terms of exposure, you guys have really helped to drive it out there in an impressive fashion. Many media outlets also posting on their websites and facebook pages (some links to those people below). It was clear that people are behind the things we do 100%, and yet we only had 27 backers. We were doing something wrong, we needed suggestions!

Within a few hours the thread had lit up like a birthday cake celebrating someone's 90th. The majority of the constructive criticism all seemed to be in a similar vein. Our branding was wrong. It was our very message that was confusing, we were pushing the Haycraft vs Kitchen fight too hard. We had initially believed that this angle would give us a nice selling point. It is still a great selling point, but based on the communities advice we have now made it a secondary selling point to the main message.  There are a portion of you that had worked out what we were trying to do, but we really had made an error in not making it clear enough.  It was apparent that it was a real possibility that people were doing the typical human thing and seeing something in a social media feed, looking at the image, liking it and then scrolling on with their life. We just hadn't captured the essence of what we were doing, and therefor wasn't capturing peoples hearts.  As you can see we have rebranded the campaign to now spell out what we're trying to do, it's so much bigger than one fight, or even one event.  We want to affect the entire global female muay thai community for years to come.

We want to thank those that gave us feedback so quickly and helped to steer this campaign in the correct direction. A personal thank you to Rosy Hayward, Kate Jackson, Caley Reece, Kevin von Duuglas-Ittu, Steph Whitehead, Laura Dal Farra, Natasha Sky, Jennifer Österlin, and of course Marq Piocos from Wombat Sports who pointed out that there is a unknown tipping point with kickstarter campaigns. If a campaign doesn't reach that tipping point it will most likely fail, but if it reaches it then a campaign can snowball.

Let's see we get on from here, we're still very positive and that is down to all of your messages of support. So you know guys know we are trying everything we can to make this a happen, working around the clock during this campaign.

We'll close this out by letting you know that we've had a lot of messages from fighters wishing to appear on one of our shows should we succeed. Due to our budget for the first show already being largely assigned we are day dreaming about possible match ups for our second show already. Jorina Baars was the first to message us and we have told her that would be our priority for the second show. As well as the huge list of muay thai fighters interested in competing for Awakening, WMMA Invicta fighters Charmaine Tweet, Andrea Lee and Lacey Schuckman have contacted us, all of which we'd fly over in a heart beat!