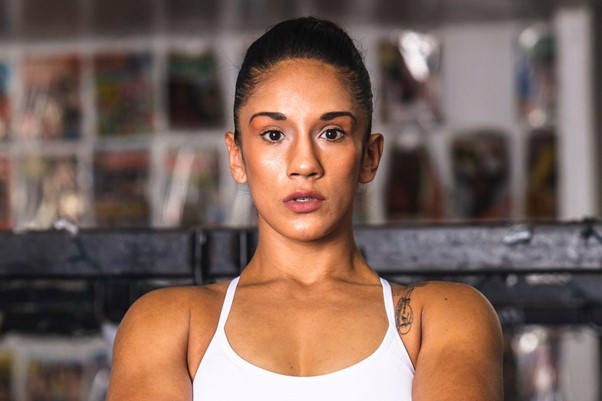 Amanda Serrano has been dominant in the world of boxing for a significant number of years. Her accomplishments are outstanding, and her dedication to combat sports is second to none. However, the recognition she’s so deserving earned has often evaded the Puerto Rican Guinness World Record holder for the most boxing world championships won by a female in different weight classes. The question looms, does a career in MMA alter her destiny?

Who Is Amanda Serrano?

As shocking as it sounds to a combat sports aficionado, Amanda Serrano is still relatively unknown when considering what she’s accomplished.

Born and raised in Carolina, Puerto Rico, the 32-year-old multi-division boxing champion began her journey towards boxing greatness at the tender age of 12, following a family move to Brooklyn, New York. She went from a 9-1 amateur, winning the Staten Island Championship in 2008, to the inaugural pound-for-pound greatest women’s boxer on the planet within a decade.

Not only is Serrano a two-time Female Boxer of the Year (awarded by the WBO), but she’s also the unified featherweight world champion, having owned the WBO title since 2019; the WBC belt since February 2021; and the IBO title since March 2021. At the time of writing, she’s the only Puerto Rican and female to win world titles in more than four weight classes. With 9 major world titles owned throughout seven weight classes, she’s already guaranteed her position as a boxing legend.

Despite Serrano’s remarkable accomplishments, women’s boxing just hasn’t received the gratification it deserves. No matter how many championships or dominant reigns the Puerto Rican boasts, the recognition and attention she deserves has never seemed to materialize. 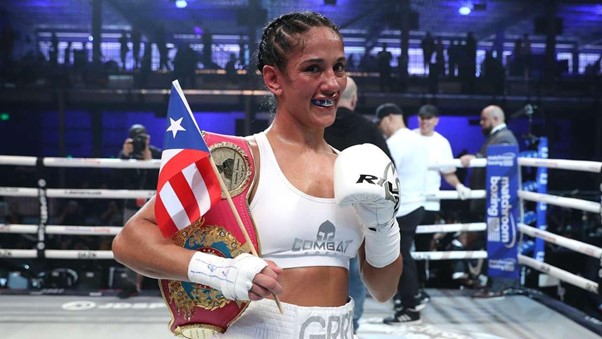 In 2015 Serrano began to train in mixed martial arts behind the scenes, silently working towards a debut in the sport.

The likes of Miesha Tate, Holly Holm, and Cris Cyborg revealed the lifestyle they’d obtained to Serrano when taking part in the filming of Fight Valley. With the lack of attention on women’s boxing and the economic potential that could stem from a move to MMA, Serrano was inspired to transition her striking skills into the cage. Serrano had also expressed she would love to become the first Puerto Rican female in the UFC, and one day the UFC fight odds could be delivering prices on her name.

Three years later (2018), Serrano announced that she’d be hanging up the boxing gloves with a permanent move to MMA imminent: “So it’s a wrap for my Boxing career. I’m going to concentrate on becoming a full-time MMA fighter. My company, @combatamericas, has shown me that this is the sport I should be in permanently. A press release is coming out soon.” Serrano said on Instagram.

This announcement followed from the MMA promotion Combate Americas, which is predominantly aimed at Hispanic fighters, signing Serrano in late 2017.

With that said, Serrano’s MMA training was evidently paying off, winning gold in her debut Jiu-Jitsu tournament later that year.

Her second Combate Americas fight was a turnaround, and those Jiu-Jitsu skills paid off with a first-round rear-naked choke that gave the boxing champion her first MMA victory. In addition, she was successful in another Jiu-Jitsu bout to kick start 2019.

Serrano’s MMA career was heading in a positive direction. Additional combat skill sets Kickboxing and Jiu-Jitsu were going positively, and her Combate Americas contract had a third fight lined up. Unfortunately, a cancellation was the beginning of the end. Serrano showed frustration towards the cancellation, then shortly after, the COVID-19 pandemic put Combate America into a hiatus of inactivity.

When the pandemic dust had settled, and Combate America returned to action, Serrano’s contract had expired, and she’d picked up the boxing gloves once again. 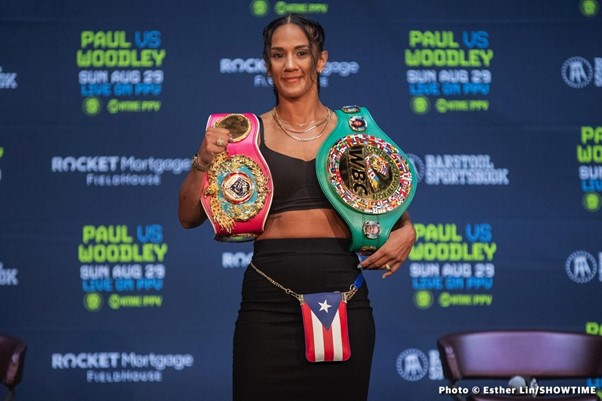 We must face facts; Serrano had entered the MMA fighter pool for a wealthier lifestyle. And with her return to boxing shining the spotlight on her more than ever, we may never see her compete in MMA again.

On Sunday, August 29, she received the attention she’d craved – and then some. A newly found friendship with Jake Paul had led Serrano to her biggest platform yet, a co-main event position of a Showtime PPV headlined by Jake Paul and Tyron Woodley.

Serrano defended her WBC/WBO featherweight championships against WBC junior featherweight titlist Yamileth Mercado and in dominating fashion. Serrano beat her opponent from pillar to post in front of millions, and her stock instantly rose.

On that note, a 32-year-old Serrano with a 1-0-1 MMA record and just four years of training are unlikely to leave her boxing gloves behind, at least until her retirement. Jake Paul has heavily vouched for the Puerto Rican star, and super fights between Serrano and the worlds best are rumoured regularly since her Showtime coming out party.

With that said, boxing standout Claressa Shields is actively competing in boxing and MMA, so we can never say never.