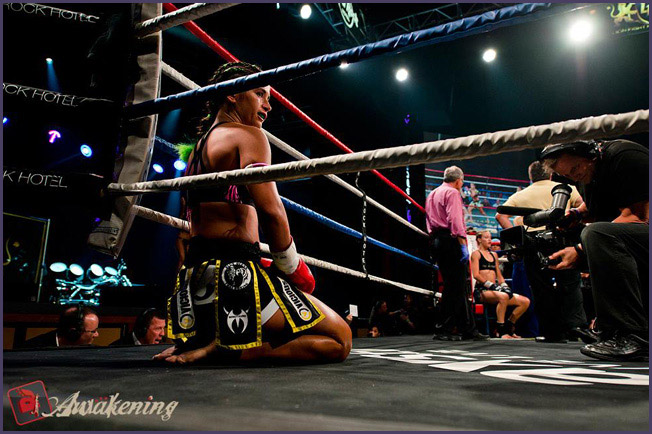 Hi Tiff, congratulations on your result in the Awakening Female Muay Thai 2013 Awards! Thanks for taking the time out to answer a few questions for our growing community and indeed the entire female fight community. We know for a fact that you are universally loved, especially within the US. You certainly carry a wonderful persona, and that leads us to our first question...

You won the Personality of the Year award which turned out to be somewhat of a two person race between yourself and Julie Kitchen - with you winning by 0.9% of the vote. How did you feel when you found out, and what do you think that it is about you that people are drawn to?

“I was thrilled! Especially because I was nominated alongside some very highly respected and well-known fighters. It is an honor! I feel like I’m a pretty outgoing and friendly person. I think I give off a good energy. Maybe that’s it! Haha!”

You hit the nail on the head. We witnessed you at Lion Fight 10 speaking to and signing things for a long line of supporters, all done with a genuine smile… it was obvious you have a lot of time for them!

Your second award was for KO/TKO of the Year against experienced Brit, Alexis Rufus. Incredibly, you got both first and second place (opponent Lucy Payne) - collecting 82% of the public vote in total. Baring in mind that these were community nominated, and voted - how does it feel to dominate an entire category?

“It feels great. It means I’m performing well in the ring. My hard work is paying off because not only am I winning fights, but doing so in an exciting and dynamic fashion.”

Totally agree. We must give some of the credit to Blue Ocean Muay Thai, of course your gym, who picked up the Gym of the Year award. We know that you trained the day of the results. What was the feeling in your camp that day? Did they give you an easy time for being a winner, or was it business as usual?

“Everyone was overjoyed! The energy in the room that day was extra high and you could really sense the pride. Blue Ocean Muay Thai, we’re kind of like “The little Muay Thai team that could.” We definitely have something special. Of course it was business as usual! Steel sharpens steel and it’s crunch time so training has gotten really heavy in preparation for my next bout. My team made sure they were doing their best in helping me get ready. I definitely feel it with my soreness. It’s tough love!”

“Steel sharpens steel” Nice, I’m going to steal that one from you!
Lion Fight won the Promotion of the Year. Is that in part due to them having the foresight to have the Personality of Year fighting for them? Sorry teehee, that's an evil question - ignore that. Huge props to Scott Kent, Christine Toledo and their team. What do YOU think made the public rally behind Lion Fight for this award?

“Lion Fight Promotions puts on the best Muay Thai shows around. Period. The production is great, it’s aired on live television to millions of viewers, and most importantly, they bring in the best fighters in the world that always put on fantastic shows. Lion Fight is the platform on which Muay Thai is finally becoming recognized in the US.”

Yes they’re do a fantastic job, and we saw some incredible cards from them in 2013.
Lastly, what are your thoughts on the Awakening Female Muay Thai Awards in general?

“I think it’s wonderful for recognizing the women of Muay Thai. It definitely helps the community grow as well.”

“I’d like to thank my Kru, Alex Palma and the rest my family at Blue Ocean Thai Boxing and Can’t Stop Crazy. Thank you to my conditioning coach Flo and my nutritionist Eric Triliegi. Thank you to my sponsors All Pro Science, Black Belt Surfing, o2 Trainer, and C2o Coconut water. A special thank you to Lion Fight promotions for giving me a place to do what I love to do. And most importantly thank you to my family, friends and the of course fans for the overwhelming love and support.”

Thank you for speaking with us and giving us your thoughts. We wish you all the best for 2014, and we especially hope to make it to more of your fights!