Our 5th Awakening Spotlight is a very special one indeed. We’d like to introduce you to Emma Bayer of MZ & Emmers Sports Bra Auction for Breast Cancer. This is a unique spotlight because she’s NOT a martial artist, but yet has an incredibly inspiring story that Awakening has now become involved in. Did we mention that this little American girl is just six years old! 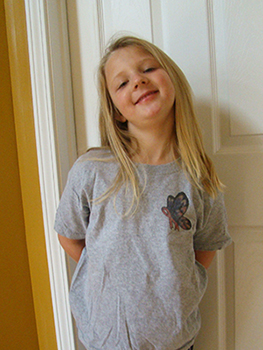 Most of us have wanted to do more for our favourite charities, but more often than not we allow daily life to prevent us from putting in the time. The story that little Emma has to tell will hopefully prove to us all that getting involved is easy and worthwhile. She has played a large role in raising almost $23,000 for breast cancer in the last two years with her family.

It all started in 2010, Emma and her parents (Carey & David) become friends with a local and professional soccer player called McCall Zerboni. She quickly became a sports role-model for Emma, and as time went on McCall became part of the Bayer family. One night over dinner, Emma’s father inquired about a tattoo that McCall had. It was of a pink ribbon and butterfly to honour an aunt who had succumbed to breast cancer. 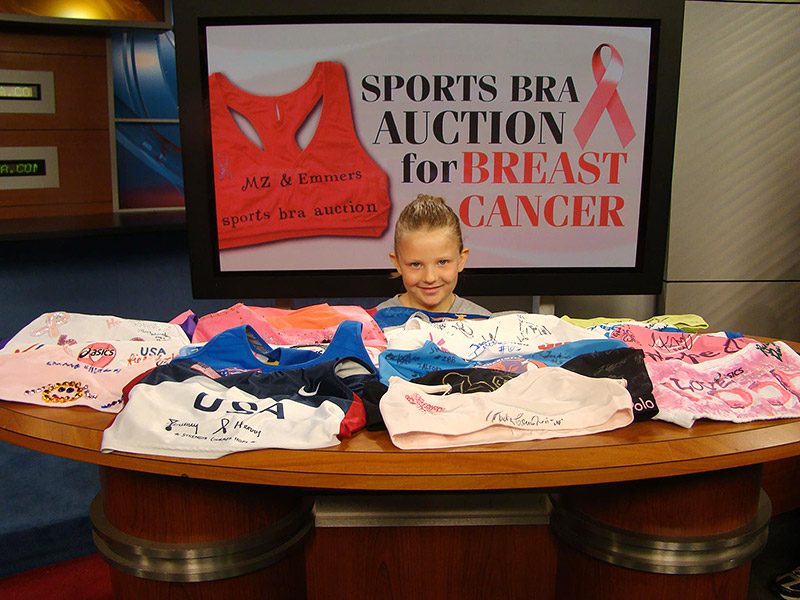 The next day, Dave had come up with an idea that would not only raise money and awareness for breast cancer, but would also introduce his daughter to the concept of helping others. We doubt very much that at that time Dave knew how far his idea would run. It started with setting up a booth at a local festival with some of the soccer players, and they raffled soccer items and raised $300. Emma’s role, at this time (4 years old), included asking people to buy raffle tickets, and pulling winner’s names out of boxes.

This small success fuelled the family’s fire to do more, and they cleverly came up with the idea they could call their own. They would attempt to auction soccer players autographed sports bras, and MZ & Emmers was formed. “MZ” is the Bayer’s nickname for McCall, and “Emmers” is her nickname for Emma. 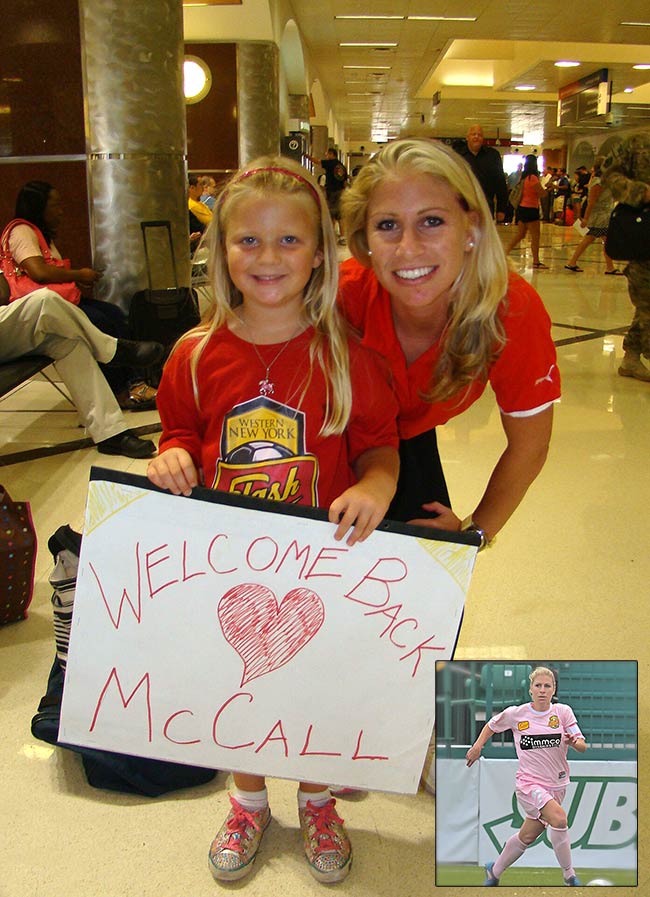 This first auction raised an impressive $4,400 and sold 84 sports bras donated by professional soccer players. They cleverly placed the auction around the time of the World Cup, and had their first taste of global reach. Players from a couple of international teams donated (Canada and Iceland), and they received coverage in a Berlin newspaper. Emma’s role continued to grow, by decorating her own “sports bra”, doing newspaper interviews, and making Youtube videos encouraging folks to get involved.

In their quest to continue to make a difference, the Bayer family then decided to try another tactic, why not include the entire athletic world?  Dave sent out over a thousand requests to Olympians, Paralympians, Dancers, Race Car Drivers, Softball players etc. and ended up with 247 bras.  The auction was held in April, 2011 and raised over $12,500! As the number of participants increased, so did Emma’s involvement…more Youtube videos and a live television appearance on an Atlanta news program.

All of this effort was noticed by Janet Martin, co-founder of Invicta Fighting Championship. Until this time, the Bayer family were unaware of women’s mixed martial arts. Janet was interested in helping out and getting Invicta and it’s fighters involved. This gave the Bayers the encouragement to delve deeper into the fight world.

This new auction took place in January 2013 and raised $5,356 from 62 donated sports bras from the WMMA world. An impressive effort, and a testament to the athletes!

Awakening have been in discussion with MZ & Emmers, and we are happy to announce that we are going to be involved in the next auction quite heavily. We will post a lot more on this in future articles and let everyone know how they can get involved. Watch this space!

Since it’s conception in 2010, MZ & Emmers has sold 333 sports bras and raised almost $23,000 for four different charities. The global charity Keep-A-Breast Foundation in now their charity of choice. Raise your cookies and applaud the efforts of Emma and her family.