An interview with Lauren 'The Hatchet' Huxley: 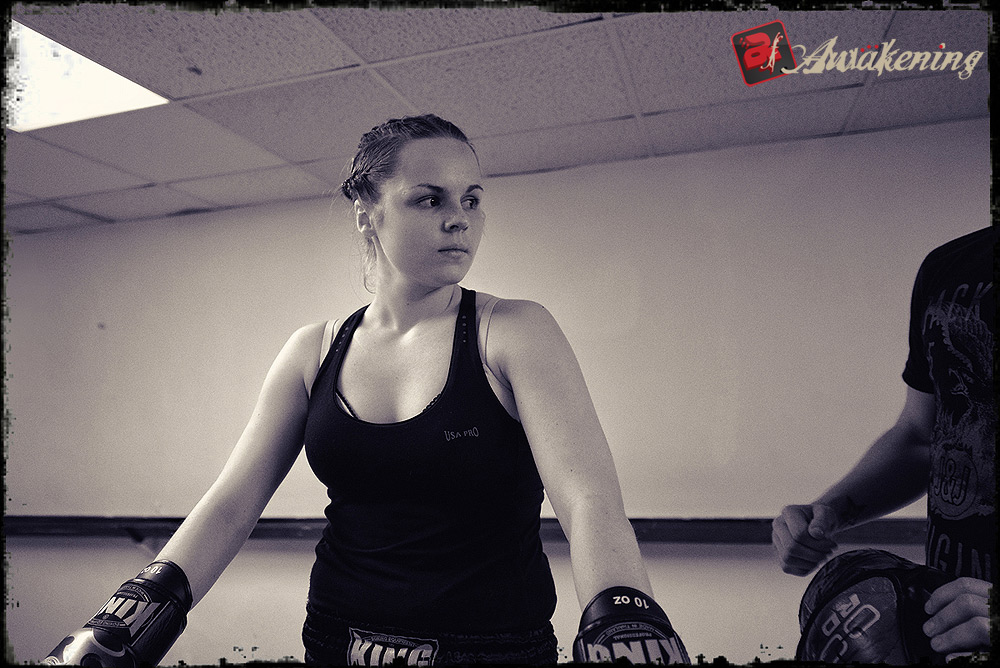 Hi Lauren, and congratulations on winning the public vote for Newcomer of the Year in the Awakening Female Muay Thai 2013 Awards!

We know that as a newcomer it's sometimes hard to find your place or get seen amongst the hundreds of fighters that start their careers each year. It's probably safe to say that working with Awakening earlier in the year may have helped your name get out there a little, but we definitely want to be clear that you are a fighter that is worthy of this award for your loveable character and exciting style.

As a young fighter, how does it feel to be publicly voted for an award such as this by a global community?

“I was overwhelmed at the thought of people thinking I was good enough to be even nominated. When I actually won I was amazed. I am very grateful to everybody that voted for me, and to Awakening for raising my profile.”

You’re welcome! Your coach Paul Wheel and team at WPT (Wales) have been very supportive of you this year. How did your coach react to your winning this award?

“He was delighted for me; he rang me as soon as he heard and congratulated me, and said I deserve it.”

Now, we know first-hand that you are an exciting fighter and have all the ingredients that it takes to become something special. Some people might start wanting to see you against some bigger names. However, on speaking to your coach earlier this year he said he didn't want to push you too fast, or drop you into the deep end as you are still only 16. We agree that some things shouldn't be rushed - what are your thoughts on your progress and how do you see your future playing out?

“I couldn't be happier with how last year went. I won 3 titles in 6 months, along with other non-title fights. Turning pro was a new learning curve for me again. Paul my coach has 30+ years’ experience in this sport and I trust his judgement 100%. He knows how I think and react and he wants the best for me. I am looking forward to moving up the ranks and fighting some bigger names.”

We’ll no doubt be pestering you for more interviews as those opportunities start to arise!
Actually, having spoken to you several times throughout the year, we think we know the answer to this next one. For the benefit of our readers, which fighters inspire you and why?

“When I began I was hugely inspired by Julie Kitchen, and I still am…”

Obviously… we can see that in your fight style and persona.

“Thanks! …and I think she has done wonders for female Muay Thai. I’m sad that she’s retired, but I’m also inspired by Iman Barlow… I would love to follow in her footsteps, because she is phenomenal in what she does.”

Ok, quick-fire round! We’re only asking this because we know you well enough. We'd like to know who you voted for in the awards? Of course you don’t have to answer:

A sneaky insight into the Hatchet brain there!

Ok, what are your thoughts on the Awakening Female Muay Thai Awards in general?

“My thoughts on the awards are… thank god for Awakening. They allow the community to share their views and helps promote female fighters in general. I am always impressed with Awakenings work.”

Lastly, have you voted for the Awakening WMMA 2013 Awards? If so, care to share any names you've voted for?

“I’d like to thank Awakening for doing these awards and Rew especially, everybody who voted for me. It really does mean a lot to me. My coach Paul and the team at WPT who teach me all I know. My family and friends for the support and understanding, and Pete Spensley at the Celtic Championship Challenge, for the opportunities. I hope I continue to perform and develop.”

Thanks for your for speaking with us Lauren. We wish you all the best for 2014, and we will be following the progression of your career eagerly!