An interview with Iman Barlow: 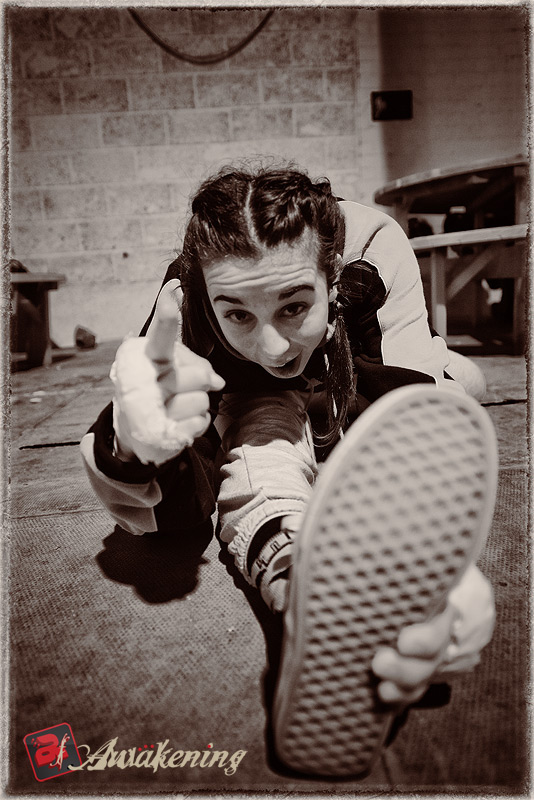 Hi Iman, first of all let us congratulate you on an extremely successful result in the Awakening Female Muay Thai 2013 Awards! If any readers aren't aware of what you won I'll recap now: Fighter of the Year, Inspirational Fighter of the Year and Fight of the Year. We'll go through each of the awards and get your thoughts in a moment.

Awakening worked with you earlier in the year when you faced Greece's Fani Peloumpi. We were struck by how down to Earth and modest you were, and you seemed to struggle to comprehend being told how many comments we receive about how loved you are by fight fans. So we imagine that you will struggle answering these questions. Just soak it up and give us your thoughts…

Where were you when you found out about the results, and what were you first thoughts?

I had just come out the bath and my Mum comes running up with the laptop reading each category out. Me and her were both screaming and I had a small cry (emotional person) I shared the results on Facebook and the feedback I got was amazing. People are so nice and supportive it's great!!

The Awards made you cry? You’re supposed to be tough!

Haha, I am tough… only when someone punches me in the face!

That’s such a great quote!!
Now, you won Fighter of the Year, possibly the most coveted award in the list. You were up against some huge names, each of which has their own style and persona. What is it about your 2013 that you feel got the public behind you?

Yes I agree, everyone who was nominated I know in some sort of way so it was an honour just to be voted by the public, let alone win. I didn't expect it at all. I think in 2013 people starting seeing me fight more around England and also my fights were on YouTube more. Kind of got more exposure and people got to know who I am and what my goal is.

We’re definitely glad that people are started to see your fights!
Secondly, you won Inspirational Fighter of the Year. The voting results were extremely close on this one with about 0.6% between you and Julie Kitchen. How does it feel to be considered the most inspirational female Muay Thai fighter of 2013 at such a young age?

Yes, this is the category I thought I'd never win! Again, each girl in the cat are amazing. For me Julie kitchen is amazing and has brought female Muay Thai to another level. I'm learning from her and hopefully helping other females get involved in the sport. Now I see Julie a lot as she works with Enfusion, so she is at most of my fights and it's great to catch up with her and share fight stories.

We’d love to be a fly on the wall for that!
Your last award was the equally impressive Fight of the Year for the bout against Filipa Correia. You had two of your fights nominated. What is it about the fight with Filipa that you think got the votes over your all out war with Alexis Rufus?

I'm not sure. I think maybe the 10 kick combo helped haha. I don't know why I did that many. The crowd were going crazy and I couldn't stop kicking. I think that fight was a technical fight where I showed off what I can do technique wise and Filipa had a heart of a lion, she was amazing! We're now friends in fb and keep in touch.

You had a great 2013, and these awards must have capped it all off nicely for you. Have they altered your perception on how 2014 might play out for you? Or to put it another way, does receiving all of this public recognition change how you will approach this new year?

To be honest it probably means 2014 is gonna be harder for me. Girls are gonna wanna fight me and come with nothing to loose. For me I'm gonna do what I do best. Train hard and enjoy fighting and win. Receiving public recognition has just given me more drive to train hard, fight harder and help others along the way.

The last awards question now, what are your thoughts on the Awakening Female Muay Thai Awards in general?

I think that it’s very encouraging knowing that Awakening is supporting female fighters because women have never had as much exposure as the men. So I'd like to say thanks from all of us girls! X

Thank you, that’s awesome to hear!
Can you give us any info on who you might be fighting this year?

I know I am fighting World Champ from Holland Adi Rotem on Jan 25th in Holland, and I fight Maritzarda Hersisia from Holland in my home town for the Golden Belt Title. After that I'm not sure. I'd like to defend my Enfusion world title against Eva Naranjo, whom I controversially lost to last year. Apart from that the future is unknown… bring on 2014

Well if we can make the Maritzarda fight, we will!
Now it's your turn to do some shout outs and thank anyone you'd like…. GO!

I'd like to say thank you to my Mum , Dad and my Brother for always supporting me. My new sponsor Fairtex, Gold Standard Nutrition whom sponsor me chicken, Booost Oxygen and also Dirty3rdUk who I'm working with this year to produce some cool clothing wear. Thanks to everyone who voted for me and everyone who supports me, I'm always overwhelmed with the comments I receive. Thanks to my training partners, my management team at Enfusion and of course Awakening.

Thanks for taking the time to give us your thoughts Iman. We wish you all the best for 2014!