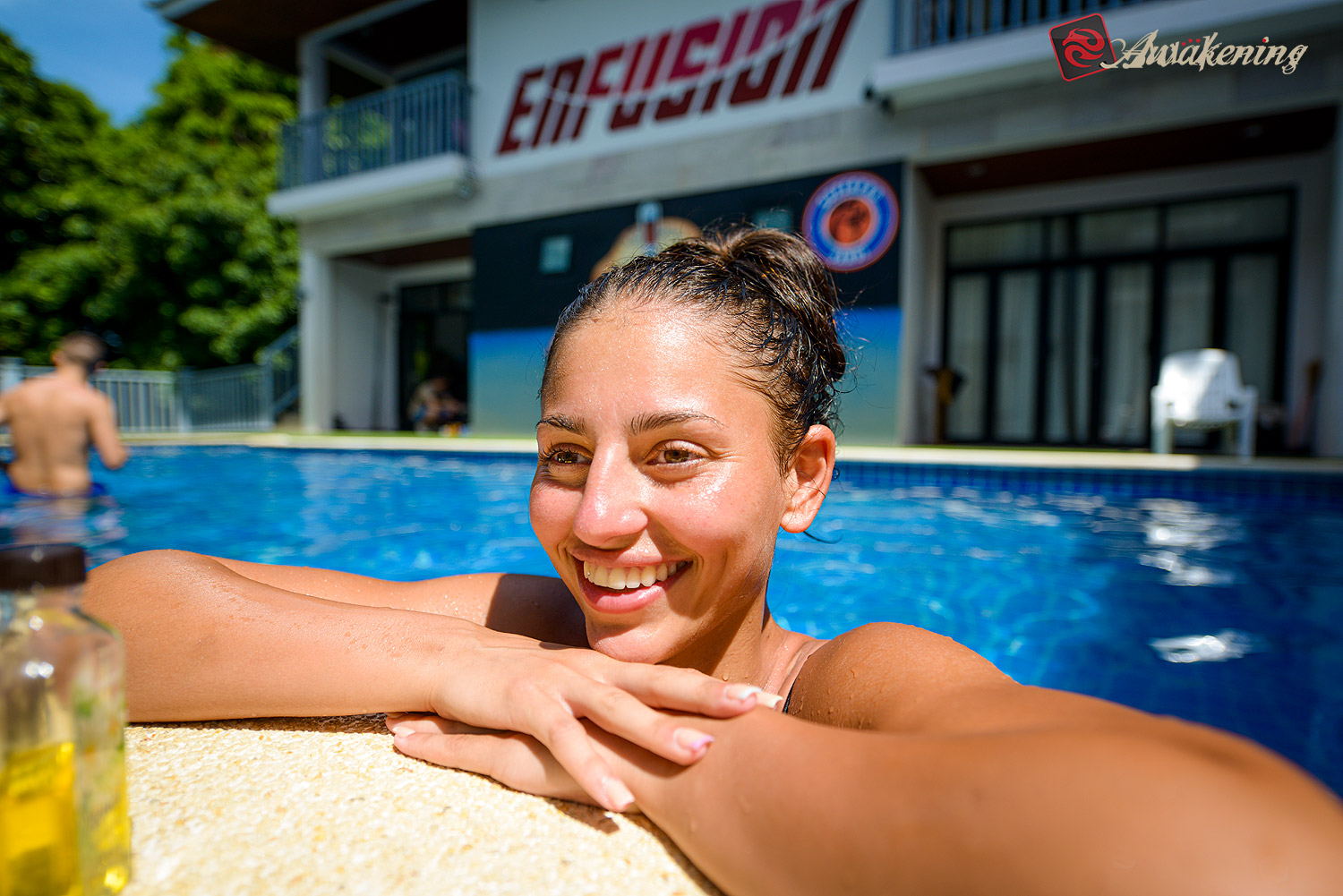 Over the coming weeks there will be a number of articles posted on the Awakening website about my experience with Enfusion, including photoshoots, interviews and video work. This Enfusion Contenders Documentary: Part 1 article is a look at the experience as seen from my eyes.

During the pandemic, whilst I was at my lowest, I received a message from Julie Kitchen. It was on behalf of the fight promotion Enfusion. She informed me that Enfusion was to start filming a fight documentary, and asked if I would like to be part of the editing team. I had worked with Julie during the early days of Awakening Fighters over a decade ago. We had worked on photoshoots, interviews and also video promos. She had suggested to Enfusion owner Edwin Van Os that I would be a reliable addition to fill a gap that the production team had. It's apparent that Edwin had trusted Julie's judgement. This thought is not lost on me.

Julie had mentioned to me something that I was already thinking: flying to Thailand to work on the documentary would be a great opportunity to network, and work with a bunch of athletes from around the world. It's probably quite obvious, but I said "yes" straight away and felt blessed that I had been thought of for this opportunity. Being the ever-lovely human being that Julie is, she said words to this effect "this is my way of thanking you for the work you have done for me and female fighters, you deserve it". That is not an exact quote! That is the gist of what she said. For this message to come to me during such a dark time in my life, I will never forget - and I have thanked her profusely in person.

Finally, the icing on the cake, Enfusion was paying for my flights, accommodation for 24 days, and food. Blessed, and thankful.

It took a while for the logistics of Enfusion's documentary to take place. There were numerous delays due to covid restrictions. Each time the Enfusion team, crew and fighters adapted and agreed to a new filming period. Eventually, it was on. The documentary would take two weeks to film, and I had decided to stay in Thailand for a further ten days. Edwin had generously offered to include the cost of this additional accommodation into the deal.

The MMA tournament would take place within the Superpro Gym grounds. At the time of writing, Superpro boasts to have the only MMA cage on the island. The Muay Thai and K1 fights would take place over two separate nights at Phetchbuncha Boxing Stadium.

To see the fighters included in the documentary, visit this page on the Enfusion website. 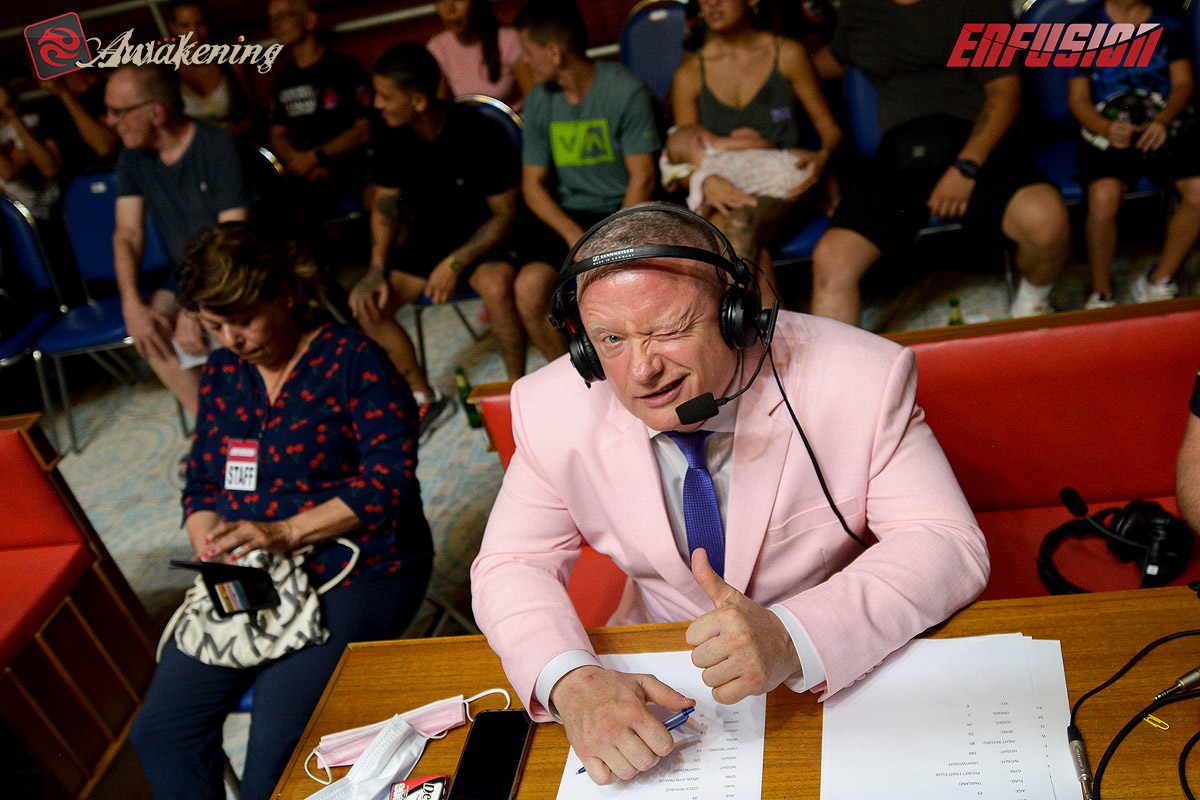 My role and how it evolved

Initially I was to be brought in to help the film crew with editing the vast amount of footage they would be shooting. It should be stated, I was to simply assist the senior editors. I knew that they would be shooting in 4k resolution or higher, the laptop I had at the time would not have been able to deal with that. I decided I needed to upgrade. Like most of us, the pandemic had made finances very difficult. The opportunity meant so much to me that I spent the last of my money ($5000) on a high-end machine built for editing. I had been due an upgrade for a couple of years, and I was happy to do so.

I landed in Thailand, and was collected by an Enfusion driver. Sharing the journey to Superpro with me was Italian fighter Laura Pileri. We were pleased to see each other, as we had spoken previously. I didn't feel quite so alone. Interestingly, I also spoke to a lovely lady who shared the journey with us. Later that day I found out it was Betty Gerber, Co-Owner of Enfusion. I feel the need to inject a quick side-note here. I became very fond of Betty during my time there. She is such a warm and funny person. On several occasions, she made my day by making a coffee for me first thing in the morning.

On the first day of filming, the creative director of the crew made the decision to not use me for any editing work. He felt it would confuse matters. With 6 or so cameras shooting all day, every day, and there all ready being two editors. He didn't want to take the chance of files getting lost, named incorrectly, and folders becoming unworkable. He was super polite about it, and as a professional that's been working in the creative industry for thirty years - I understood completely. On location, I believe he made the right decision, and is a testament to his professionalism. Edwin accepted this graciously as a creative decision. It did however mean that Enfusion had spent all this money on getting me there. This made me feel incredibly bad, although it was never mentioned by Edwin, Betty or Julie. I assured Edwin that I would go above and beyond to document and publish articles about the documentary. If they needed any help with anything, I would jump into that role.

For the first three days I was left to my own devices. I spent twelve hours a day building rapports with the female fighters, and shooting for Awakening. I tried to get up before everyone else, and tried to be the last one shooting. I was averaging 1000 photographs a day, and a bunch of videos. At points I would see a photo opportunity with a male fighter, or member of the Enfusion team and take it.

On the forth day, I was asked to fill an official photographer role. Shooting weigh-ins, fights and general training. I was also asked to do three separate shoots for Enfusion's new merchandise range. It was the least I could do under the circumstances. 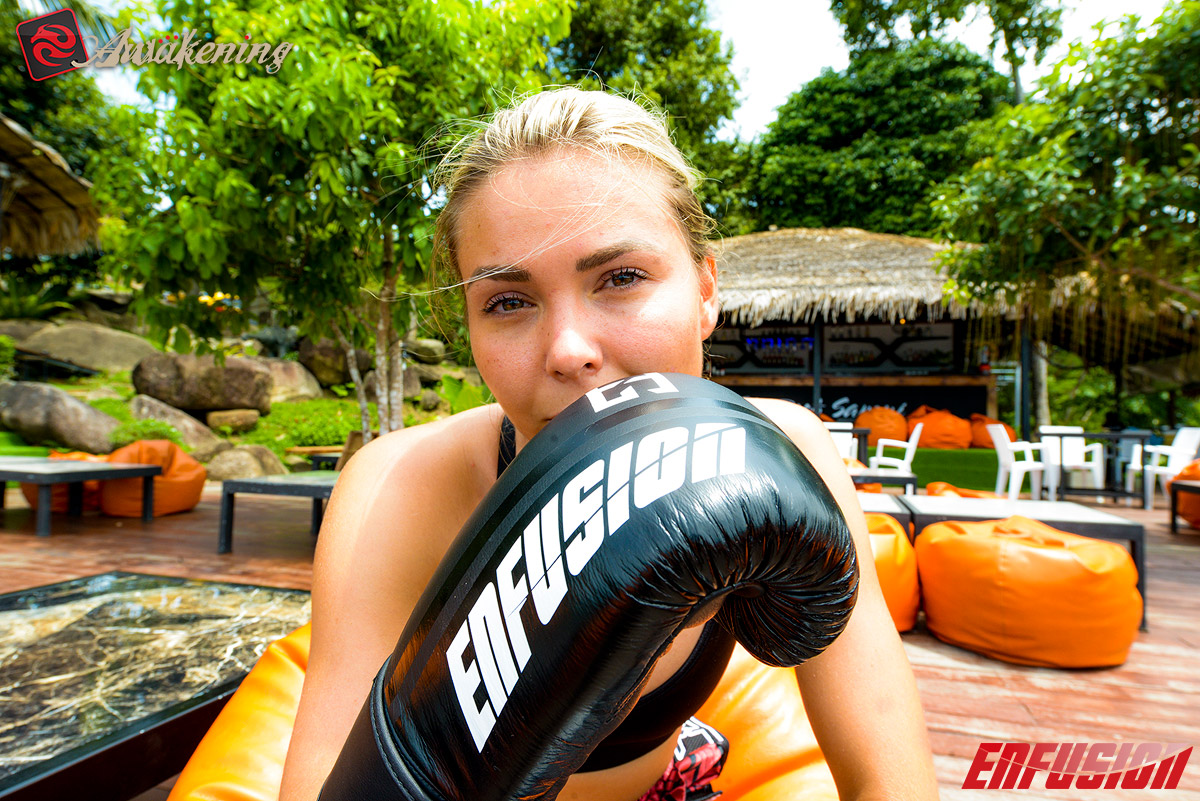 Issues that I faced

It took about a week for the crew and I to bond. This was simply one of those natural occurrences. In the first few days I was focused on Awakening Fighters, shooting things that the film crew were not. I kept out of their way the best I could. I would be shooting a female fighter, and at some point, someone from the film crew would come over to film them. I would move and go do some work with another fighter. Creatively, and in terms of building rapports with fighters, it worked perfectly. In the evenings, after the crew had packed up and returned to their rooms to review their mountains of footage - I continued to shoot, and finally disappeared off on my own to local bars to review my own days work. This three days of separation definitely made it difficult to bond with a crew that was already quite tight. Thinking back, I could have tried harder, earlier.

I wish we had bonded sooner, it is what it is. The crew were all decent and funny guys. I did remain somewhat of an outsider with the crew throughout due to our workflows being different. I had the luxury of having my own workflow, so was free to edit photos from bars and restaurants - taking in more of the Thai culture.

One evening, perhaps the fifth or sixth night, Aaron the creative director saw me arrive back at Superpro around 2am. We got talking and he asked where I always disappear to. I explained the local people and bars I had found, and it was this point that my bonding with the crew started. Some great evenings followed at said bars. In the end we bonded! 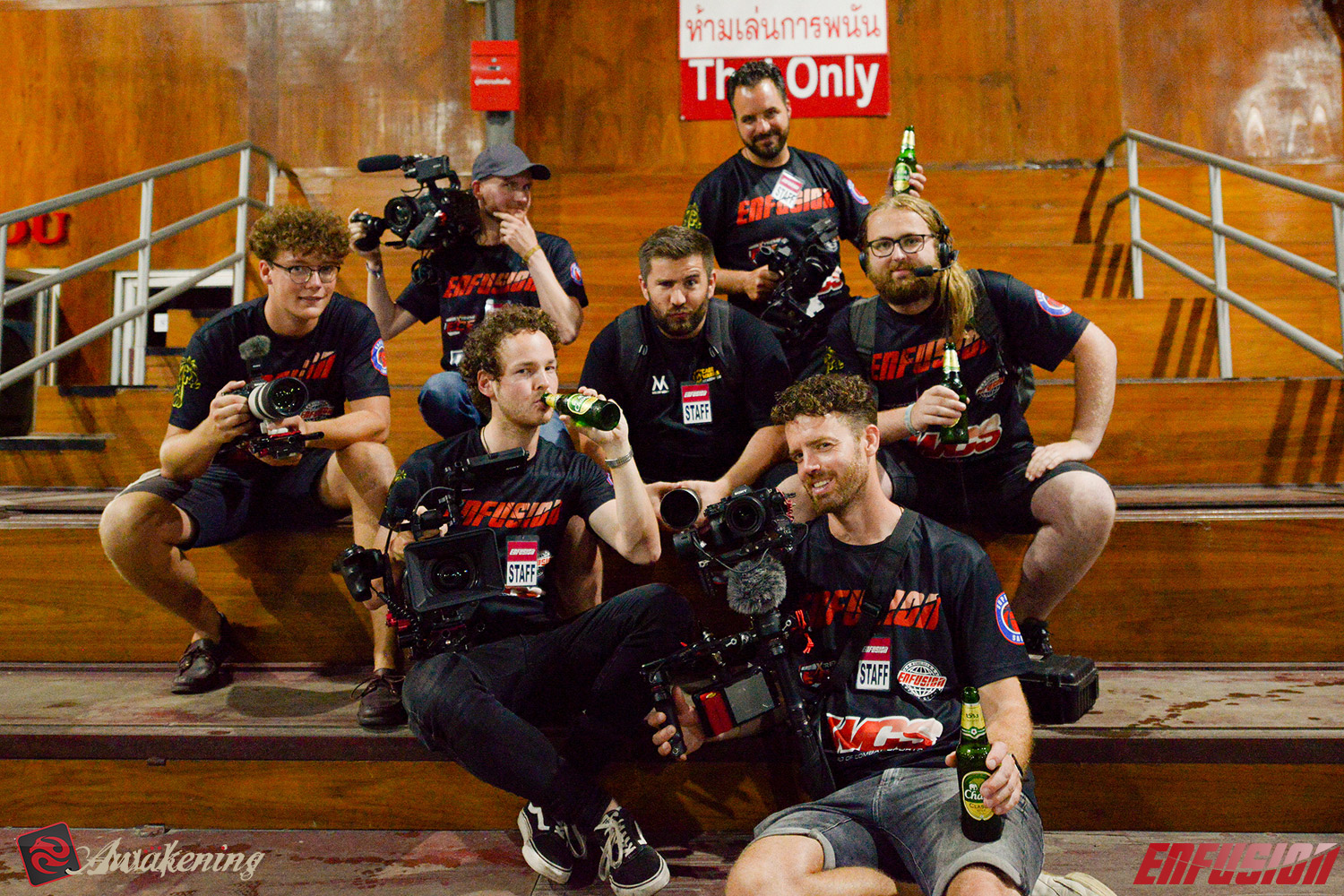 Two factors need to be taken into consideration here. One: Many people had told me to travel light to Thailand. Two: I was supposed to be video editing. With these in mind, I took my camera to make the most of the opportunity with working with numerous female fighters. I had decided that since I would mainly be video editing, I would not take my entire camera kit. I chose my preferred lens, for a documentary photography style. This is my favourite style. I'm not a fan of "set-up" shots, I like to represent reality and capture moments. Done well, this style is far more powerful for promoting female fighters than shooting an athlete wearing makeup, under perfect studio lighting.

If you're not a photographer, this section might not mean much. Suffice to say, I did not take the correct equipment to do the photography I was subsequently asked to do. I had to pull out all the stops, lean on my thirty years experience and adapt, quickly. Several members of the crew had commented that my equipment was wrong. They were right, but I did my best for Enfusion. When you see the documentary style shots I have taken during my time there, you will see they are a lot better than the weigh-in shots, fight shots, and set-up merchandise shots. If I were to do it again, I would not travel quite so light and pack a couple more lenses! 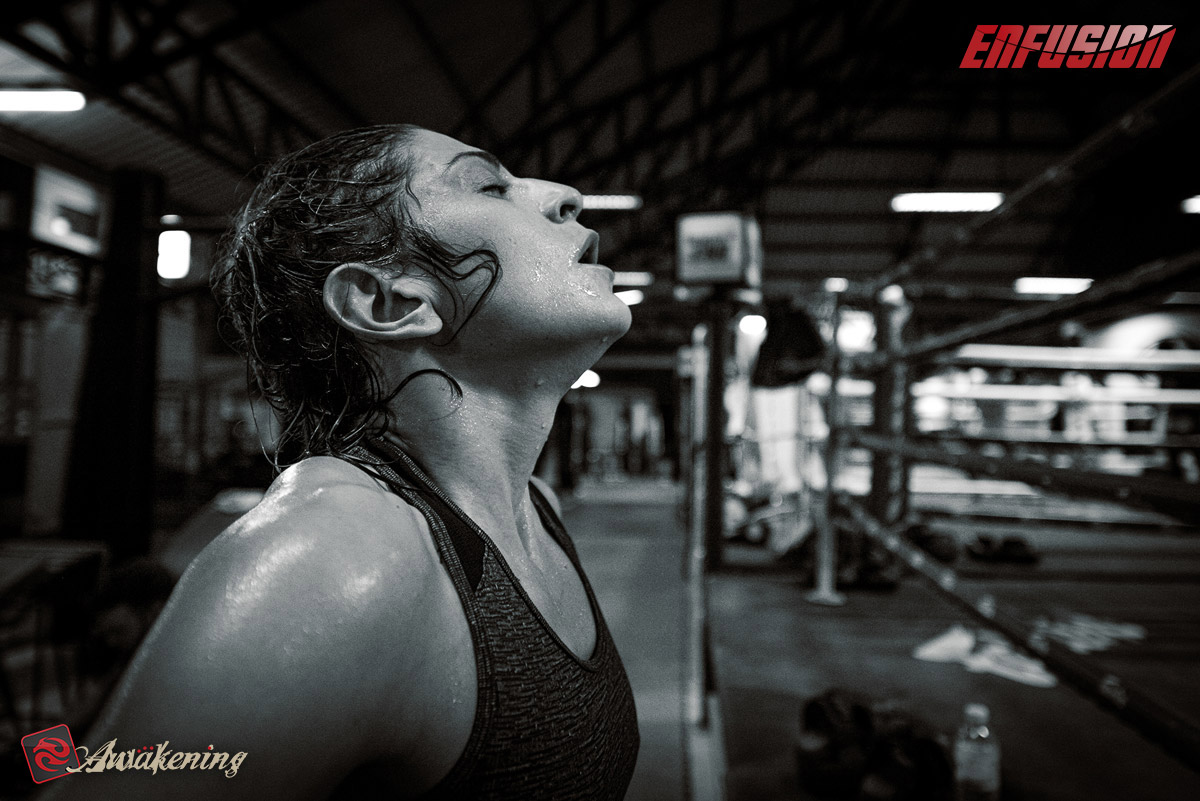 There is no other way of saying this, I had the time of my life and I am eternally grateful to all involved. The entire Enfusion team, Superpro staff and film crew. In regards to Awakening, it was near perfect. I networked, spoke candidly with athletes about my goals and vision. I made friends and had some wonderful experiences. I also shot some 14,000 photographs, some 100 videos, and came home with a tan.

Over the coming days, weeks and months, you will see some of this work. It's a lot for me to get through, so please be patient, its coming!!!