6th April 2013. Grace Anderson faced Claire Walkey in Guildford, UK at CSMMA's Ultimate Conflict 4 in a last minute K1 bout. Grace's greatest assets are her power and dedication, whereas Claire has a youthful fearlessness about her and Touchgloves Gym showing her the way. Claire gave away some 2kg in weight difference and we though that she would be outmatched this evening against the much bigger and stronger opponent, but we applaud her for taking the fight at the last minute. 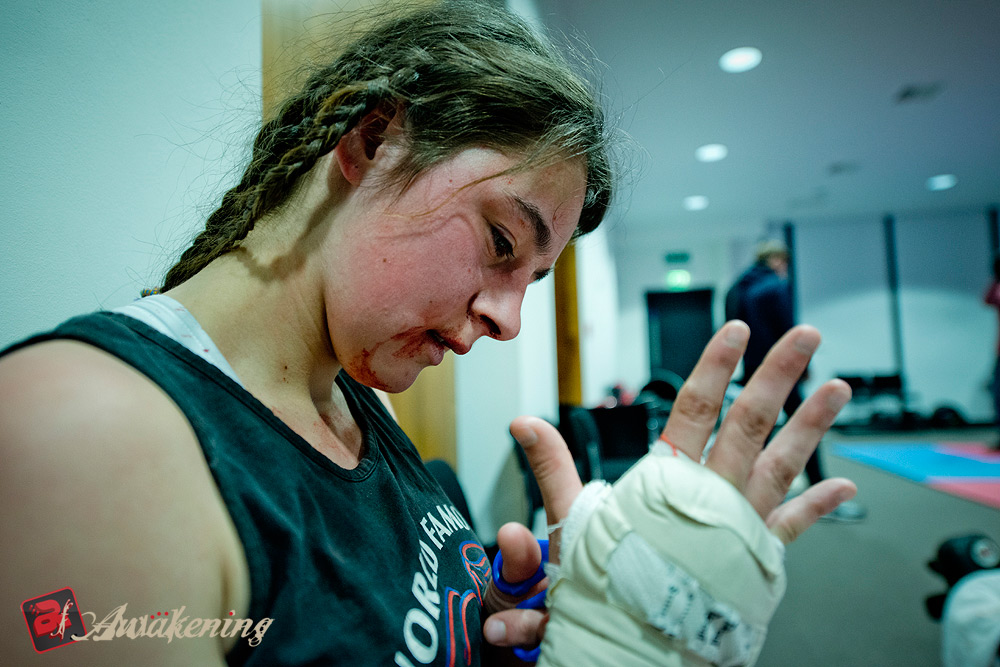 During the entrances it was clear who the crowd favourite was, Claire came out to a small ripple of applause whereas Grace entered to a home crowd audience cheering their socks off. Stood opposite each other these two ladies looked so different. Grace is intimidating and Claire just appears sweet. We thought it was be a short fight, but Nathan Kitchen assured us that Grace would be shocked by what Claire is capable of. We'd seen both fighters before, but we'd never seen Claire fight a Grace.

The first round started and Grace seemed to be taking it easy on Claire, possibly because she just seemed much smaller and younger. Claire landed a couple of kicks with great technique which seemed to snap Grace out of that mind-set. Grace picked up the heat and landed a jab that set Claire's nose bleeding. Unphased, Claire gave as good as she got.

During the second round Grace clearly out powered Claire, and most fighters with that age and weigh difference might have quite. Surprisingly, Claire did the opposite - she came forward, throwing in some Superman punches along the way. The crowd by this time had completely warmed to Claire's attitude and were cheering her on.

In the third round Grace looked gassed but battled on. At the end of the round Grace won by unanimous decision, clearly winning each round on points. However, this fight was not one sided at all, Claire fought incredibly against the wiser, stronger and larger opponent. It is possible that if the fight had been five rounds, Claire may have out paced Grace to a victory.