An Interview with Vicky Church, Smash 10 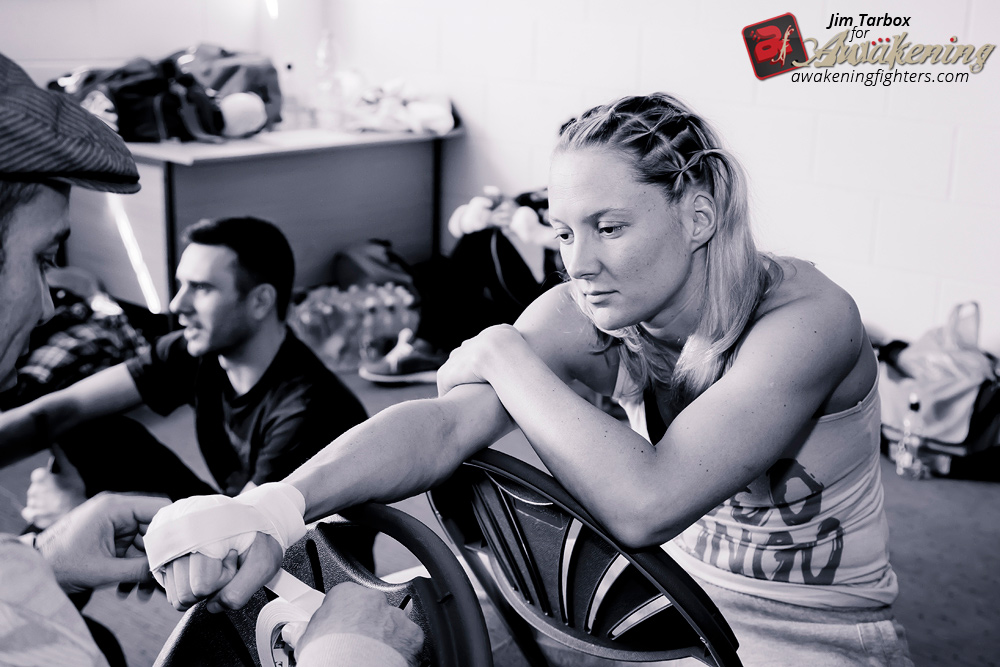 This Saturday Vicky Church faces UK’s #2 Sophie Gallagher to defend her new ranking at Smash 10 in Liverpool. We caught up with Vicky to ask her thoughts on Sophie, Smash and female Muay Thai.

Four weeks ago, Vicky Church from Cornwall, England became the UK’s #1 at 60kg after Sheree Halliday unfortunately lost her slot from being out through injury for a substantial amount of time. A note to promoters everywhere… Church vs Halliday is a fight we want to see!

Hi Vicky, thanks for speaking to us!

To start off, let’s talk about Sophie Gallagher who you face on Saturday to defend your #1 slot, what do you know about her?

“Not very much, she’s ranked #2 so I’m assuming she’s fought and beat some of the fighters that I have fought and to get her to #2. Apart from that, I’ve done my YouTubing and Googling but I can’t really see much about her, so she’s a bit of a ghost.” 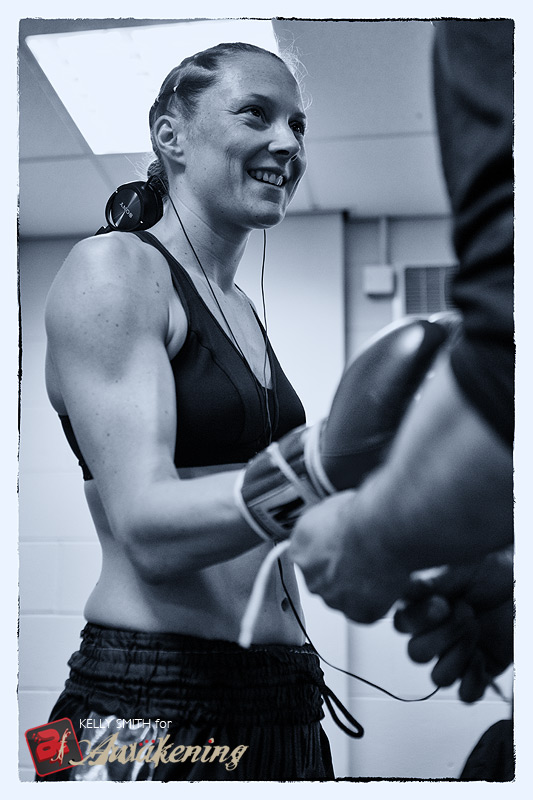 The show that you’re fighting on is Smash 10 in Liverpool, what are you thought on the Smash promotion?

“Smash looks like an incredible production, I was really excited to be fighting on Smash 9 until I got injured, so I’m absolutely thrilled to be fighting on Smash 10. I’m privileged to be picked to fight on Smash, I thought after having to pull out last time they’d be a bit sour with me, so I’m pleased they’d want me back. Looks like it’s one of the biggest productions in Europe, with lots of sponsorship deals offered to them, and lots of TV promotions I think they’re going to be getting. It’s an incredible opportunity for me and as an up and coming fighter... I and hope to put on a really good show, both for myself as a kind of comeback, and for females in the sport as I know there are only 2 female fights on the show.”

Yes, we were at Smash 9 and can confirm it’s a good production! You’re currently the #1 in the UK at 60kg, a ranking that you received just four weeks ago. It’s quite uncommon for a fighter to defend that slot after such a short time. What are your thoughts on that?

“Nathan [coach] always says… any fight, anytime, anywhere… so yeah, I think there’s no reason why I should duck and dodge, if I’m fit and ready and if there is enough prep time then I should be fighting. I’ve fought anywhere form 58.5kg up to 70kg, so as long as there’s enough fight prep time then there’s no point hanging around, or hanging on to it.. if there’s someone better than me then they should be number 1. Get in there and get on!” 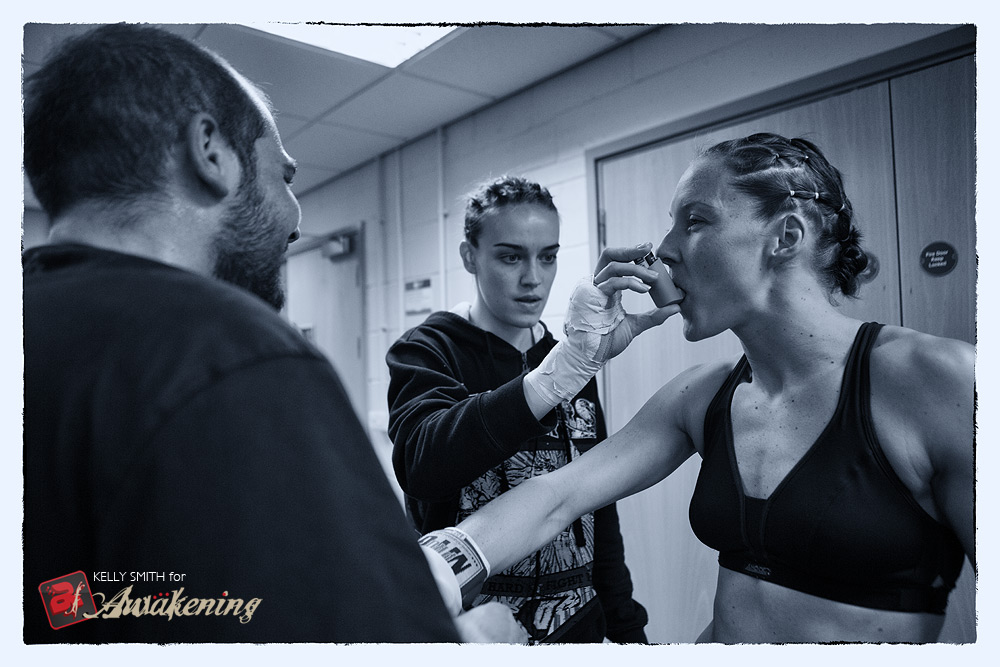 Commendable attitude! Talk us through your training regime

“My training regime… I train explosive strength, plyometrics, cardio, bag, pads and sparring.. and I train twice a day, sometimes three… six days a week… occasionally I need a rest day twice a week if I get delayed onset muscle soreness a bit too much, if I haven’t taken care of my nutrition… which I’m generally very good at with recovery shakes and stuff… I generally train about 15 - 18 hours a week.” 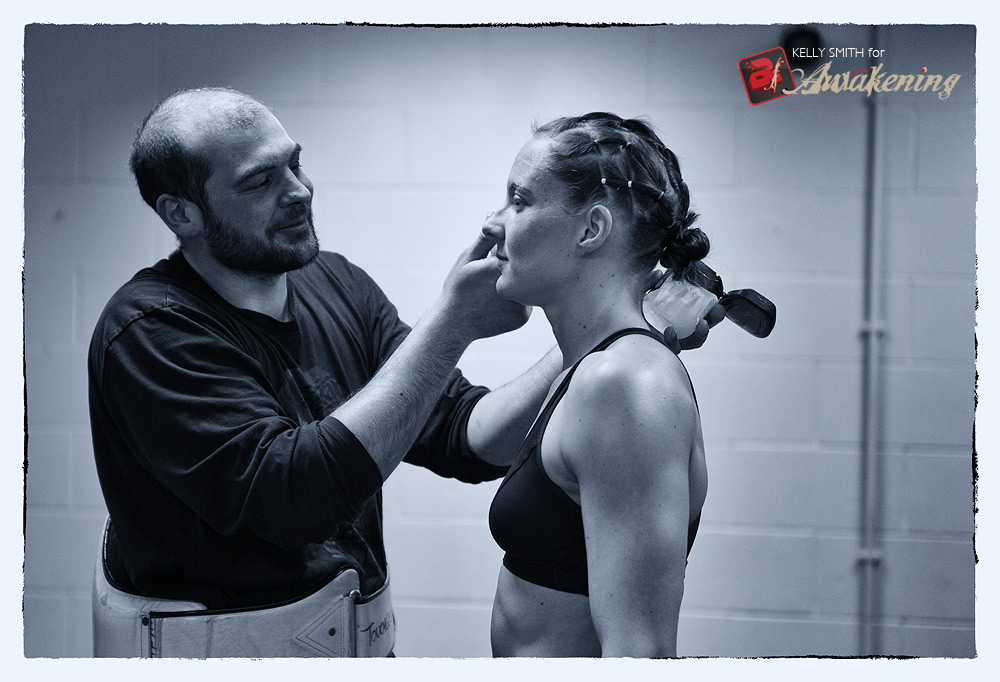 What’s it like having Nathan Kitchen as your trainer, and also having Julie Kitchen and Lucy Payne as sparring partners?

“Having Nathan as a coach is awesome… he often gets a bad rep and puts his nose out of joint to push us forward and make sure we get a fair deal in the sport… especially female Muay Thai, I think it’s more difficult for females in sport in general… he really is an ambassador for female Muay Thai and for us as athletes, he’s promote us right up to the end and is often misunderstood… plus he can analyse fights, and can see gaps that other people might not, he seems to have a sixth sense.. Its great having in my corner.” 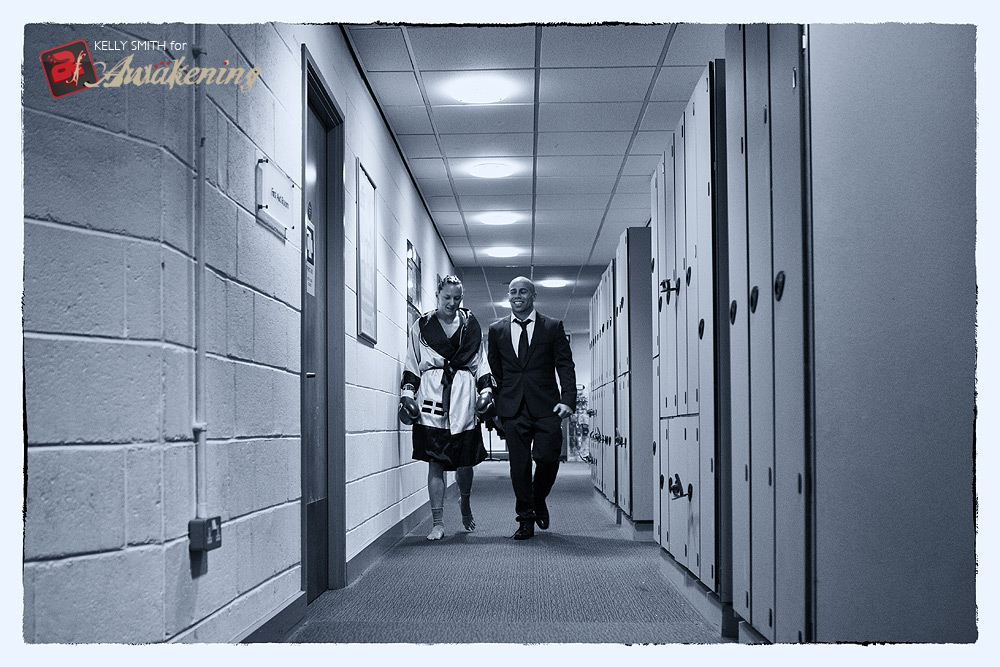 “Having lucy in my training partner these days is a little bit dodgy because she is so good, so to get in the ring with her for just a stand and sparring session you have to really have your head screwed on… that’s also great because it’s challenging in different ways… and obviously having Julie to do one-to-one sparring sessions with is priceless… I’ve looked up to her for years, I think she’s incredible... there’s nothing she doesn’t know about Muay Thai… so for me, sparring with her, if I can even land a couple of shots on her, then I know I’m ready to go.. it’s awesome” 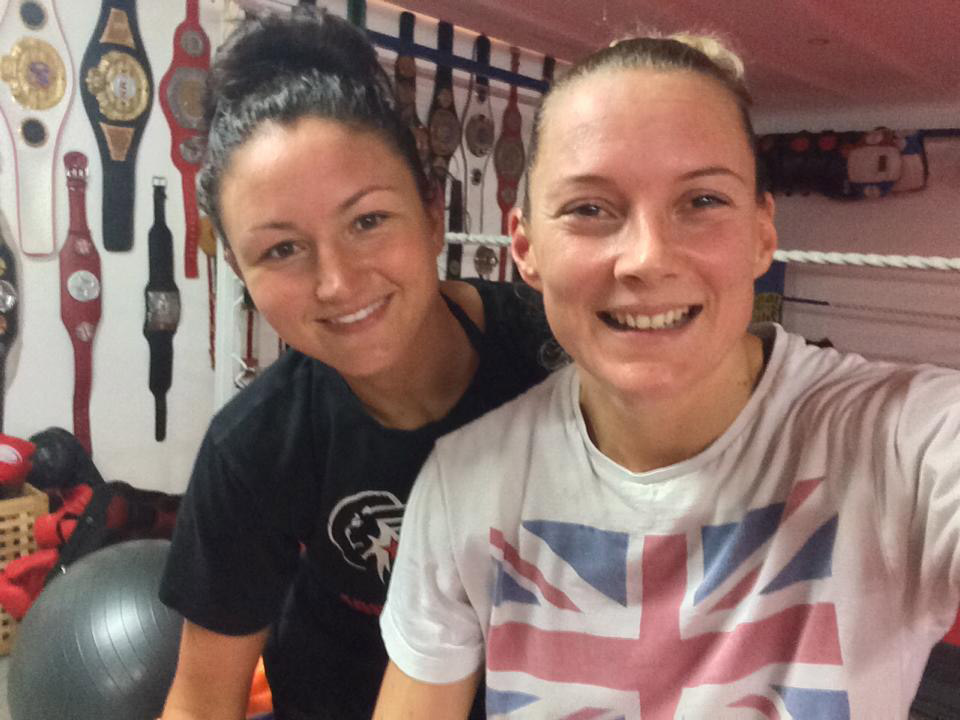 How do you see the British female Muay thai scene in comparison to other countries?

“I think England in general is massively behind the times with any sports other than the big five, you know like, rugby, tennis, cricket, football, motor sport, and especially even more so with females. I heard recently that the female rugby team won the world rugby championships and had to go back to work the next day doing their nine-to-fives, Monday to Friday. For me it’s critical now that sport in general, and female sports most of all is taken seriously. Martial arts is a fantastic way to create discipline in people’s lives so it should be seen as a positive thing. On another note I guess, in terms of our abilities as female fighters in the UK… having fought Dutch people in Holland, I think we probably aren’t quite as strong and aggressive as a nation of fighters as those guys are, but I think other than that, we’re right up there with the top ranking fighters in the world.”

Why do you fight? What’s the best part of fighting for you?

“Best part of fighting for me is to be able to practice over and over again, execute a technique with precision and timed at the right time. So the technique is executed at the right time, with precision and it lands and it hits… it’s just like that the golden moment when you’ve seen the gap, and it lands.. and it leads to more.. and a flurry, it’s addictive. And then the other side of it is obviously when you can see a gap, create a gap, make it happen... that whole being able to dominate the space is brilliant… and obviously the raising of the hand when you win... yay! [giggles]”

What’s the worst part of fighting?

“The worst part of fighting, I’ll say food. The worst part, isn’t the nearly puking when you train, on your 6th hill sprint, or the getting smacked in the face until your ears rattle and go home with semi concussion… it’s not being able to eat what I want when I want… and I don’t eat bad food, I just want to be able to eat carbs when I’m hungry at night, so for me, and my friends and family.. I feel sorry for them because I’m like Satan without carbs… that’s the worst part of fighting” 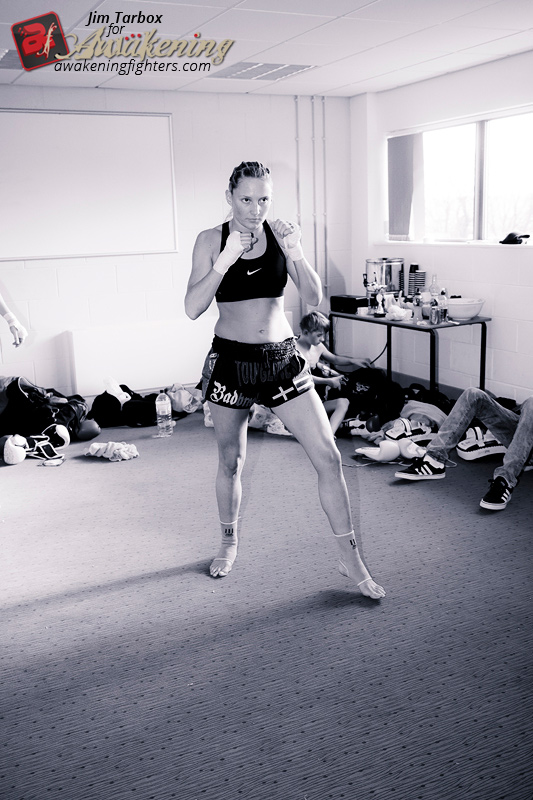 What can people expect to see from you on Saturday?

“Ahhhhhhhhhh, hopefully a newer improved version of me, with some of the kind of crazy old school Taekwondo stuff thrown into the mix… with now a really strong basis of Thai fighting stance, with speed and execution. How I would of fought about a year ago, when I was uninhibited by injury. Lots of speed, lots of excitement, a fast paced fight, hopefully finishing early if it rolls out the way I want it to.”

Are there any thank you’s and shout outs you’d like to make?

“Always, everyone I want to thank… the first people I want to thank are my sponsors, Taylor Made Uniforms… who I’ve not yet met, but I’d love to meet Zoe because she sounds awesome on facebook.. .and then Phil Simons who is my sports massage therapist, he sponsors me with sports massage and keeps me mobile since I’m ancient... he needs to keep all my bones moving and my joints limber… and obviously the Awakening team for continually promoting myself and other female fighters around the globe… I think you guys are a major catalyst for where the sport is at the moment… exploding for females as it has done for the past 6 to 12 months... so thanks to you guys for continually pushing it forward for us... obviously Nathan, Julie, the Touchgloves team goes without saying… my family, friends and boyfriend for putting up with my tantrums and meltdowns... and other momentary lapses in sanity!”