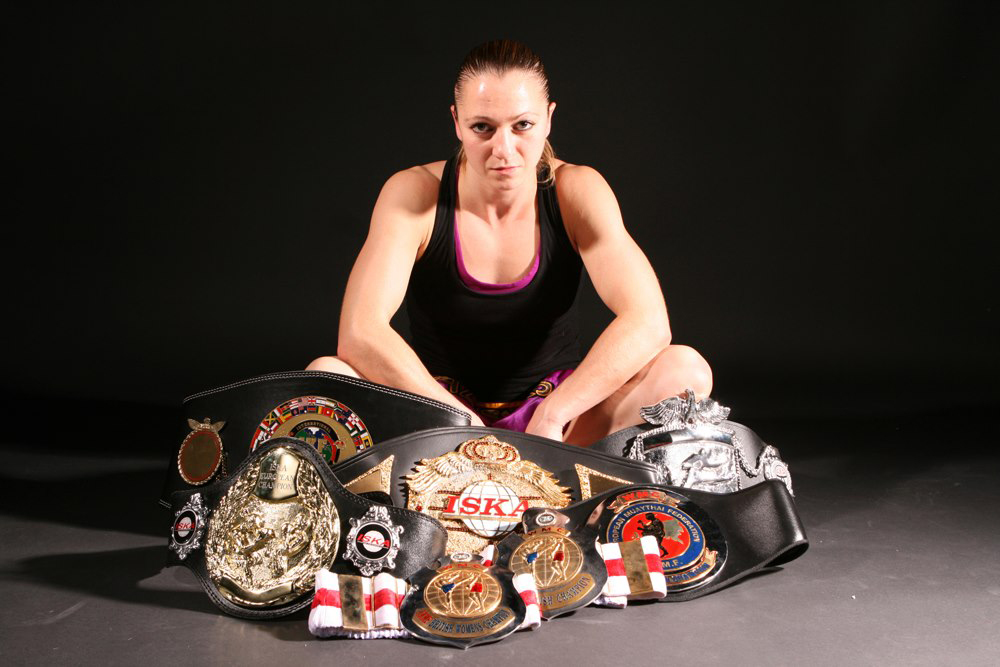 You are set to fight fellow Brit Christi Brereton on February 22nd in Telford, UK for the UKMF British Title at 55kg. What can you tell us about Christi?

“Christi and I were due to fight a few years ago when she was 17. It was on a UKMF show and I think for a title. The fight was pulled the day before the weigh in. It was massively frustrating for both of us and I actually spoke to Christi on Facebook afterwards, we both said how we hoped we'd get this opportunity again. She then had some time out from competing and when she came back we were matched on Smash Muay Thai in December, but Christi pulled out of that fight & was replaced by Tanya. So, this is third time lucky for us both! Christi was a strong upcoming fighter when we were matched the first time. She was known for her high kicks and that famous KO head kick. I expect a tough fight with Christi, I know she will be bringing a lot to the fight. I can't wait!”

We asked this same question to Christi, so let’s ask you the same…. Is there any bad blood between the two of you, or your camps? Or is it business as usual?

“On my part no, and not from my camp either.”

Are you able to tell us a little about how you are preparing for this fight?

“As always training is hard. My trainer Neil Dunn has been working extremely hard with me and as always we are working on certain areas which we believe will win us the fight. But I won't reveal too much more than that I am afraid, you'll just have to wait and see!” 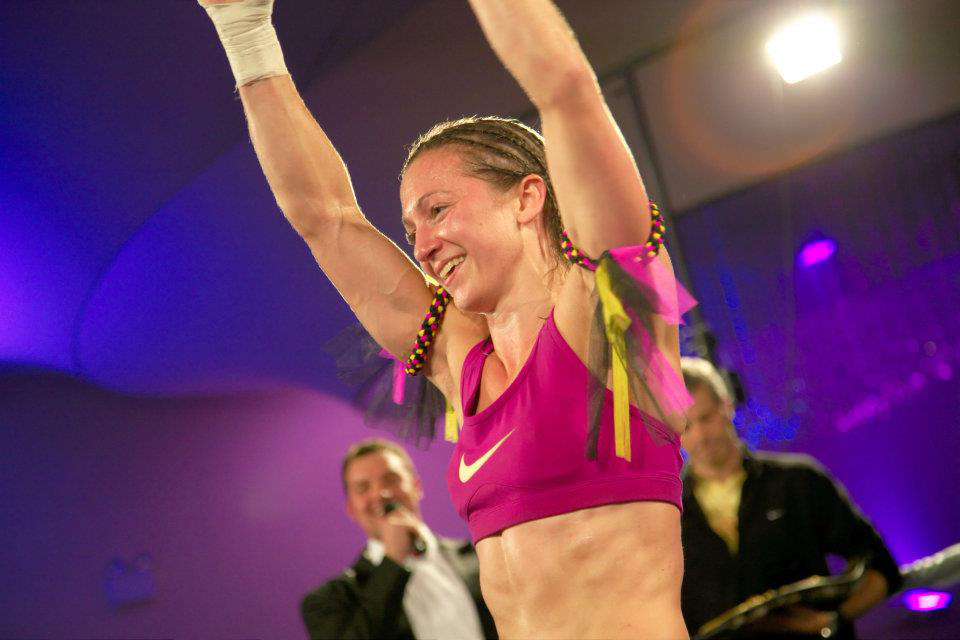 What is your prediction for the outcome of the fight against Christi?

“I never predict outcomes of any fight, but I always go in to win my fights.”

So, moving on to some more general questions now, so as our readers can get to know you better. Who inspires you, or who perhaps inspired you when you began nine years ago?

“Julie Kitchen and Germaine de Randamie were two fighters I used to look to a lot when I first began Thai Boxing. Julie has always been an inspiration to me for what she has achieved and done for female Muay Thai in general. There are many fighters I get my inspiration from now. Andy Howson, I love his no fear style to fighting, Yodsanklai, John Wayne Parr. I am a fan of JoJo Calderwood too, although she has moved to MMA now.”

As a now highly experienced and respected fighter, with fighting techniques aside - are there any bits of wisdom that you pass on to your students as a matter of course? It terms of how to mentally approach training and fighting?

“I have always trained and fought with the motto 'If the mind is strong, the physical possibilities are endless'. I always try to pass this on to my students/clients. For me a strong mind is the essence of fighting. I also remind people not to take themselves too seriously. Getting lost in this is a recipe for disaster. I learnt this from my time in Thailand. It is important to have fun with what you do and to enjoy yourself.” 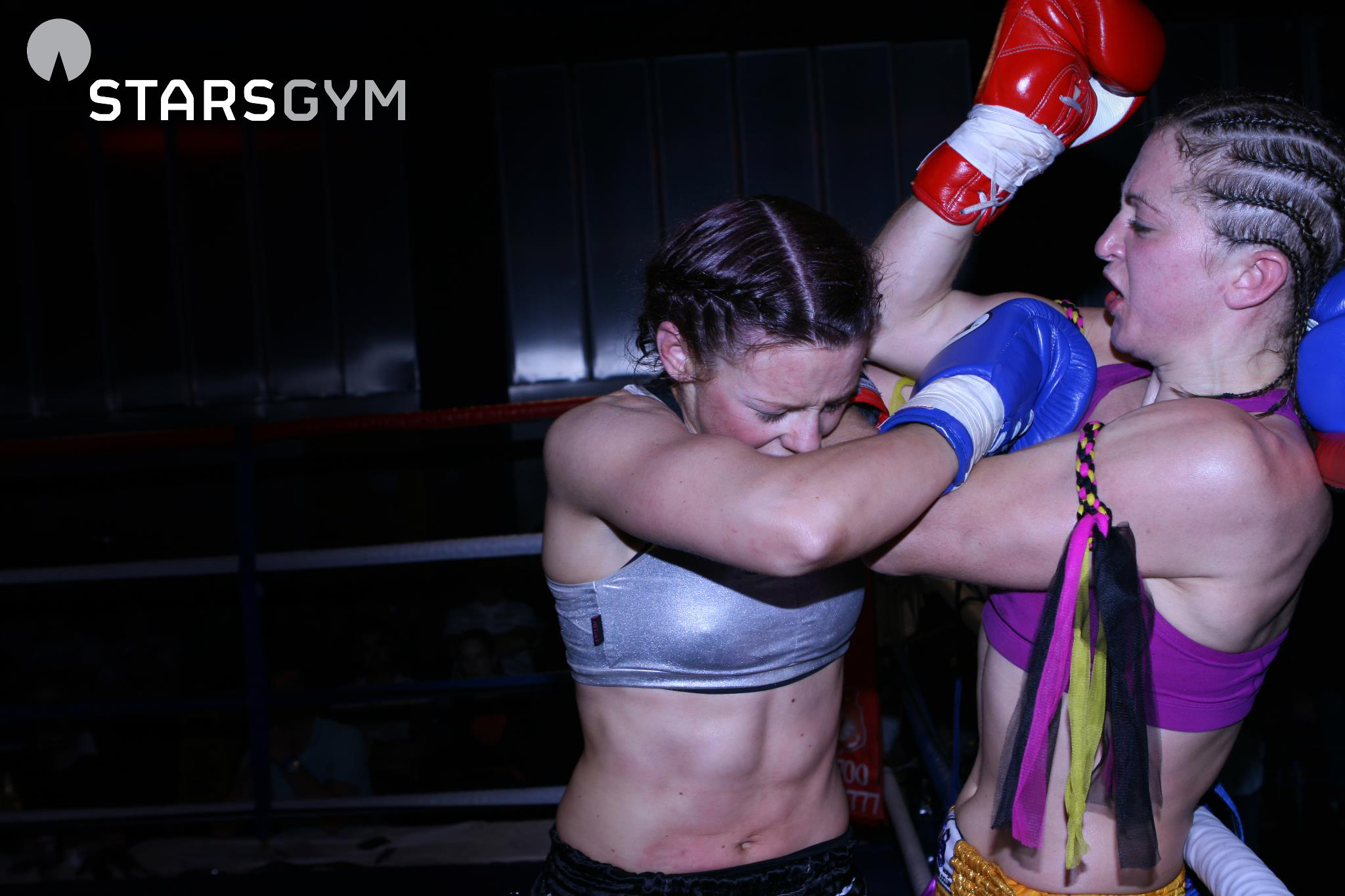 Obviously music can be a great motivator, do you listen to anything specifically during training, or right before you walk out to a fight?

“No, I don’t really listen to music before a fight or do anything differently than I normally do. I try and keep focused and as relaxed as I can.”

Random question here - you briefly dabbled in MMA back in 2007, and won your only fight. Most fighters who transition into MMA tend to stay there, why did this not happen to you?

“I do not know why there is an MMA record for me because I have never fought MMA. I think what happened is that I fought on an MMA show called Cage Fight Series, but it was a boxing bout in a cage. I fought a girl called Shalina Roberts for the CGS belt…and won! For some reason it has been logged as an MMA fight on my record! I have trained in MMA at my gym but I have no interest in fighting professionally in it. I love stand up too much.”

Well that’s interesting! Thanks for the heads up, we will get that changed on your profile right away… we’re glad we asked, ha. 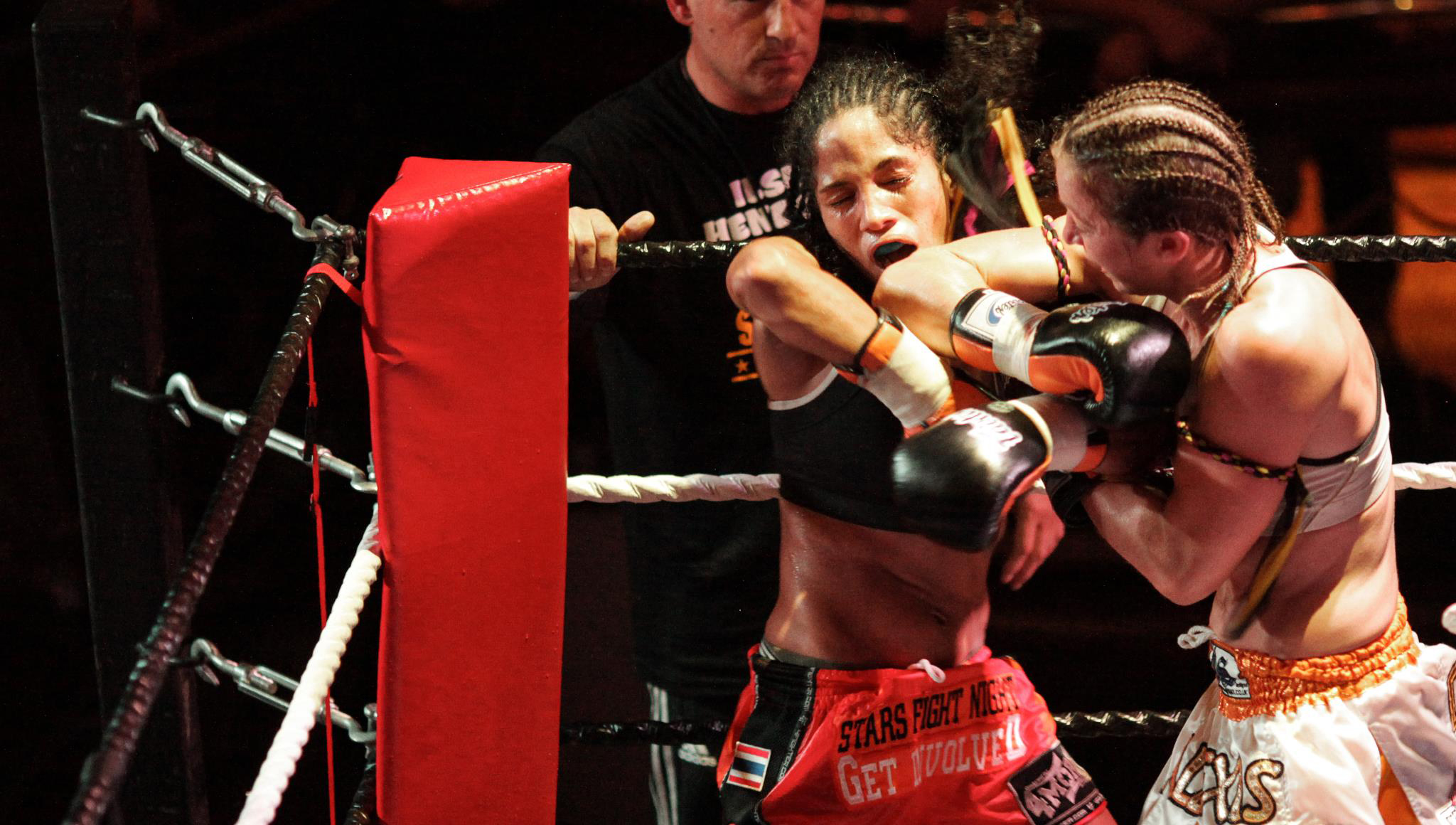 What are your goals for the future? is there anyone in particular that you would like to fight, is this something you can share with us?

“I have always wanted to fight Ruth Ashdown. For a time she was in a lower weight category than I was but I then moved into that category. I like to fight the best at my weight and I have always had the up most respect for Ruth as a person and as a fighter. I think our two styles would make for a really exciting fight. But sadly my camp has been trying to get this match for a few years but her camp won’t agree to it. Ruth and I are friends and do talk from time to time. But I am not sure this fight will ever be agreed sadly. Apart from that I just wish to maintain my number 1 spot and eventually end my career on a high. A WBC belt in my collection would be fantastic! When I do retire I wish to focus on other upcoming fighters and pass on what I have learnt.”

Well that’s a shame, for the record we’d love to see you fight Ruth too. 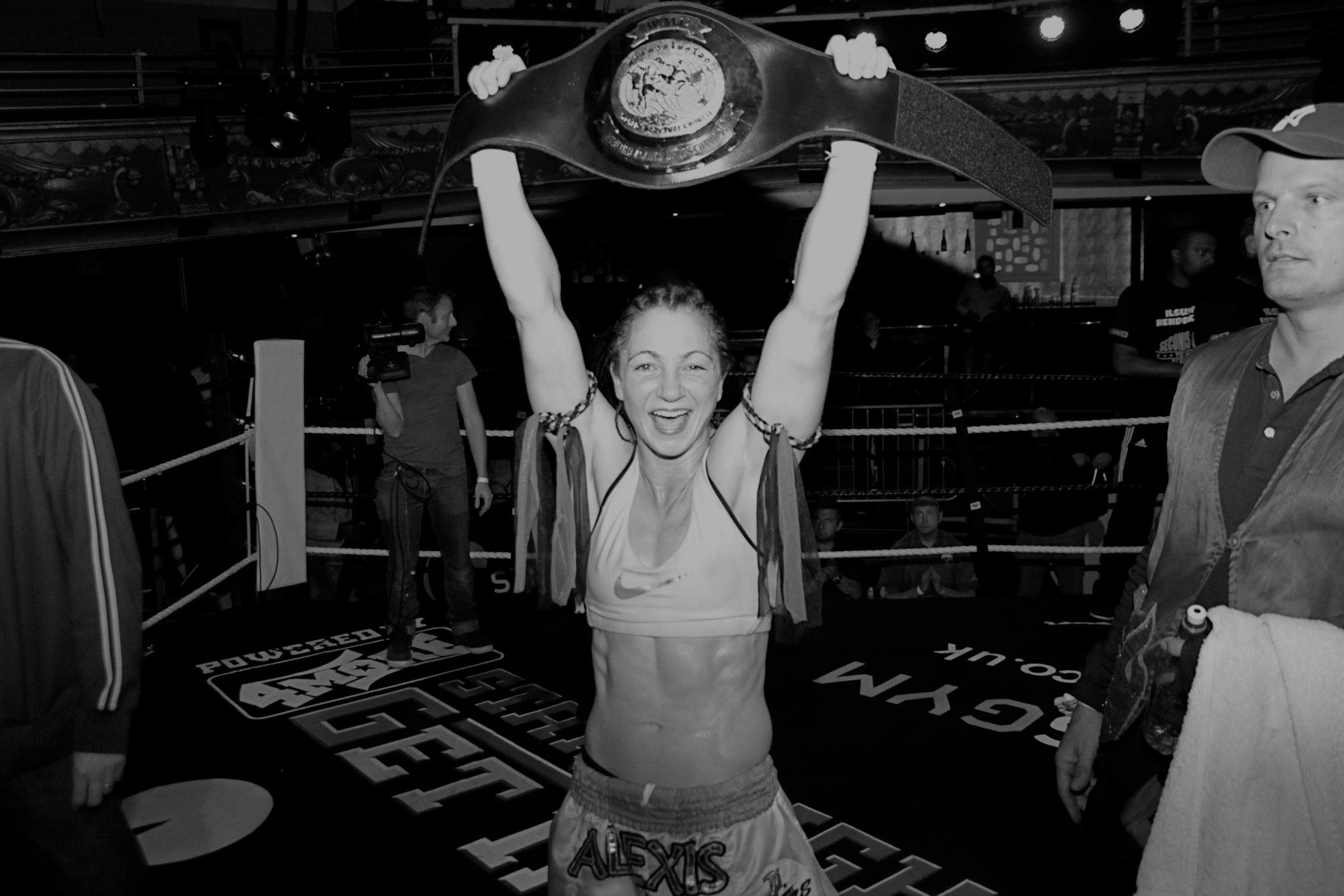 Thanks again for taking the time to speak with us Alexis, we love watching you fight and you're a credit to the sport! We hope that you will allow us to come visit for a photo shoot at some point! Before we close, is there anyone you would like to mention or thank?

“Thank you Rew! As I said at the beginning I am honoured that you take such an interest in my career. I would love for you to visit for a photo shoot, we have been talking about that for some time now..! I would like to thank all those who have supported me in my career, my trainers, my clients, my friends and family. For all those who believed in me and my fans who have supported me along the way. I wish to thank Mati for helping me get to where I am today; I learnt a great deal from him and will never forget that. To Neil my trainer who motivates me, supports me, is always there for me. He puts his heart and soul into my training and I am so grateful to him and blessed to have him as my trainer and as my friend.”