When you start following any sport, it’s a good idea to check out some of the most memorable moments. These show you what the sport looks like at its best and makes communicating with fellow fans easier. In the UFC, you definitely need to watch some of the most entertaining fights so that you know a good fight from an underwhelming one.
Exposing yourself to the best UFC match-ups is also a good idea if you want to place bets. Knowing a good performance when you see it is vital for choosing the right fighter who you think can win. You’ll also need to pay attention to UFC betting odds.

The first-ever UFC event was a humble eight-man tournament that wanted to explore which martial art is best. The winner of the event was Royce Gracie, whose victory was singlehandedly responsible for the Brazilian Jiu-Jitsu that most MMA fighters practice today. That’s because Gracie quickly beat them all, showing how unstoppable BJJ can be.

The best example of this is the semi-final fight against Ken Shamrock. It won’t take you long, Gracie locked in the submission within 57 seconds, though it takes a few moments for the referee to notice the tap out. It’s almost like he’s in disbelief that Gracie made Shamrock tap out so quickly and we don’t blame him.

In the early 2000s, the UFC found a new audience through its very own reality TV show – The Ultimate Fighter. As part of the first season, sixteen martial artists were coached by UFC legends Chuck Liddell and Randy Couture. The finalists competed to secure a luxurious, life-changing UFC contract.

Coached by Liddell, Forrest Griffin faced Couture’s protégé Stephan Bonnar in a light heavyweight final. On April 9th, 2005, the two men fought as if they were the only thing standing between them and their dream… because that was exactly the case. Ending the fight bloodied, judges ruled Griffin was the winner by 29-28. The performance by both men was so good that Dana White offered the UFC contract to Bonnar too.

If it’s the punching action that made you interested in the UFC, check out Robbie Lawler and Rory MacDonald’s second bout at UFC 189. Noses get broken and lips get split as the pair turned rabid against one another, and a stare down at the bottom of round 4 showed that their willpower wasn’t shaken, they were willing to go all the way until their bodies physically couldn’t take any more. It’s about as brutal as a stand-up MMA fight can get and ends dramatically with MacDonald crumpling from the beatdown.

Conor McGregor is one of the biggest names in the UFC over the past few years. After losing to Diaz in UFC 196 by way of submission, a fight that broke records for the biggest pay-per-view earners in history, their rematch would set another record and allow McGregor his revenge. The fight was fought to the bitter end, giving McGregor enough time to unleash his striking power on Diaz and win by decision.

While women’s UFC fighting had existed for a while, and Strikeforce’s Gina Carano V Cris Cyborg bout was the first headline MMA event featuring female fighters, UFC 157 was where the UFC embraced female fighters. Rousey and Carmouche clashed over the UFC Women’s Bantamweight Championship at the event, where Rousey won and was propelled into the mainstream as a result. 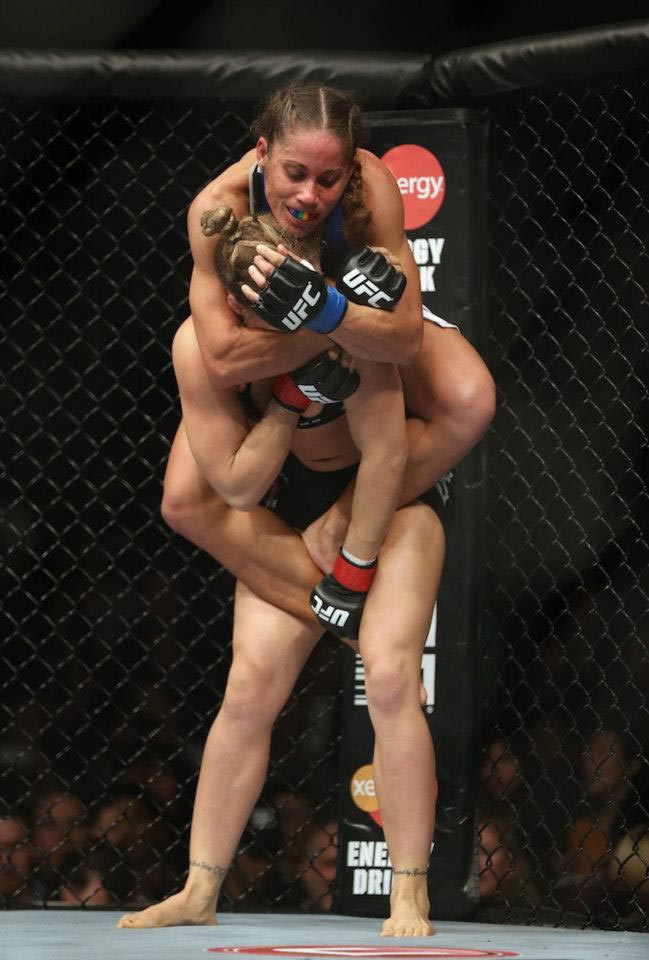 Liz Carmouche on Ronda Rousey at UFC 157 from UFC Facebook

Maybe skip this one if you’re squeamish. An MMA fight isn’t just clean punchouts and submissions, sometimes things break. UFC 168 shows the toll that MMA fighting can impose upon the body, even on a GOAT fighter like Anderson Silva.

In a rematch with Chris Weidman at UFC 168, Silva seemed to be losing in the first round. Then, in the second round, Silva unleashes a kick that Weidman checks. Silva’s leg snapped at the shin and his foot wrapped around Weidman’s leg before falling down.

As an honorable mention and a sequel to this fight, check out UFC 261. Chris Weidman, almost a decade later, suffers the same fate after trying to kick Uriah Hall. The same also happened to McGregor in UFC 264.