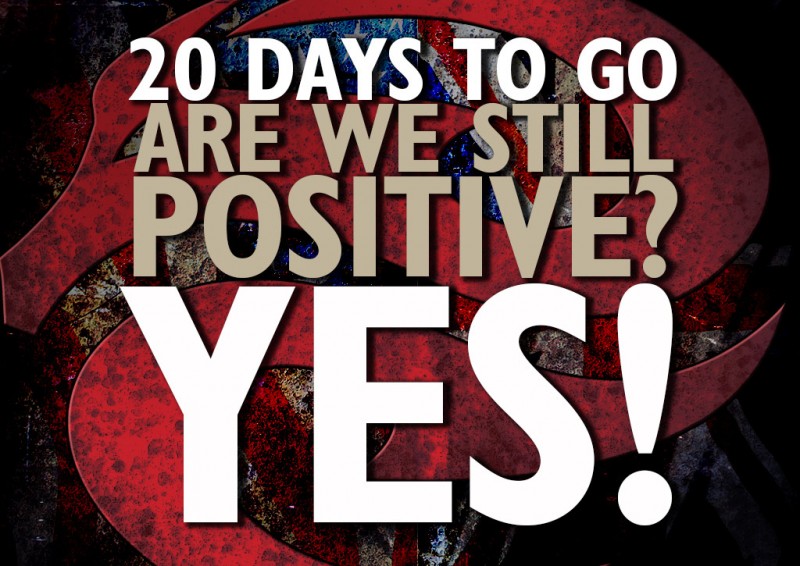 We're 10 days in to the 30 day kickstarter campaign and we wanted to write a 10 day milestone article to take a look at how the campaign is going, the ups and downs and how we think it will pan out. It's ever important for us to keep everyone informed on what we're thinking, transparently looking at the positives and negatives.

First of all, we're feeling very positive. Even if the kickstarter is unsuccessful we have learned a great deal. It would set us back quite a long way, but our newly acquired knowledge will be put to use effectively in the long term.

If you don't have time to read this full article, please read the short "Shares" section at the end, before you leave

(Stream x Audience) + Ethics = Awesomeness
It's not very often stated, but Awakening stands for more than just promoting female athletes... yes, that is our main focus and always will be. There is however an underlying tone that we adhere to; anti-corruption, and fairness to not only athletes but to people like ourselves - the fans following the careers of fighters. This topic is a whole article by itself so we won't go into anymore detail here, suffice to say that having spoken to so many fighters and visited so many events that we're aware of quite a lot of poor practices.  Why can't we, the fans, pay less to watch better paid fighters?  Some people will say... "that simply can't happen".  Why not? For something like this to work you would need three basic elements....

1) An international fight card available as a stream at a price that is below the average of $15
2) A global audience large enough that trusts and believes in the promotions' ethics and vision
3) An ethical promotion that means what it says... profit equals better pay & further shows

This can be simplified further as: (Stream x Audience) + Ethics = Awesomeness

Invicta did it, but unfortunately unlike their great promotion we are starting from 0 and don't have the capital to kick things off ourselves. This of course is all very simplified and yes we might have our heads in the sand, but we are giving it our best shot with this kickstarter.

So how is the kickstarter doing on day 10?
From the outside there will be a lot of people looking at the stats and thinking.... "this doesn't look like it's going to happen". With each day passing we wouldn't blame you for thinking this.  There are however 20 days to go, and a lot of ground can be covered in 20 days if the right message touches the right people. We are a long way from giving up, in fact we never will.

Campaign message
Admittedly, we screwed this up in the first four days.  We had placed to much weight on the headline fight of the first event. We were extremely proud of getting Julie Kitchen vs Lindsay Haycraft because it had taken a lot of persuasion with both fighters. Many promotions have tried to get Julie out of retirement and failed... we didn't 🙂 Either way, it was an error for us to push this fight so hard at the forefront of the campaign.

The whole idea for the campaign is of course much, much larger than any single fight could be.  We hope that our messaging is clear now - we want to do to female muay thai what Invicta did for WMMA, long term. We want to open up opportunities for fighters around the world that still don't yet exist... and just as importantly, we as fans want to be entertained in the process!!

Pledges
We're not going to dwell on this. It's clear that we've yet to reach the tipping point in which it starts snowballing. There is a bystander effect taking place, we're all human. We understand that the lack of a booked venue and date is also an issue that is stopping many people from pledging. We had hoped that people will see that their pledge goes towards the bigger picture - ie, if they miss the first event for whatever reason then it doesn't matter that much because they will have helped give birth to a promotion that will entertain them for years to come.  But yes, we do understand that it requires a leap of faith and that the campaign would be growing significantly faster were we able to announce an actual date more specific than May/June - anybody want to lend us the deposit for the venue? 😉 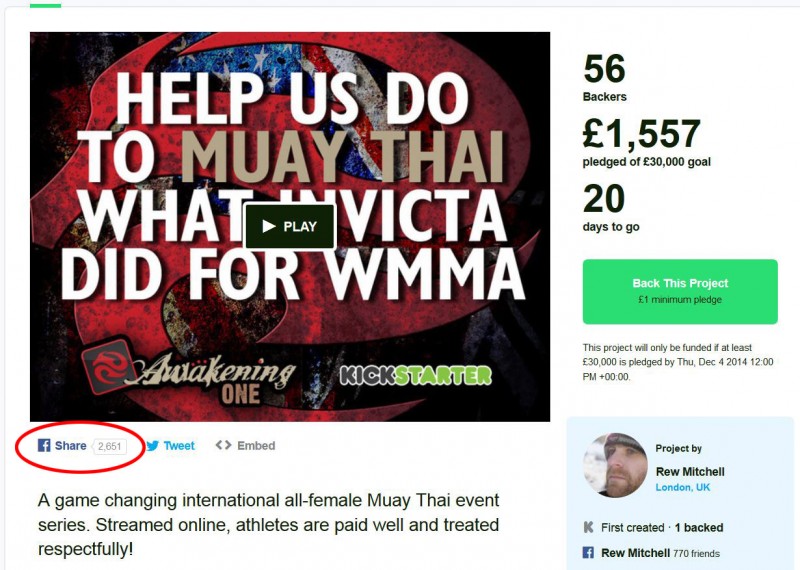 Shares
So this is why we are still so positive. The amount of shares the campaign has had is jaw dropping.  At the time of writing we are at 2,650 shares.  As humans, we care about what our peers think of us, it takes a lot for us to share something on our facebook wall or twitter feed. It has to be worthwhile and you guys have proved to us that there is indeed the audience that we've always said was there.  Awakening has a global audience, we knew this all along because we speak to so many of you. In the past we have tried to secure sponsorship from brands but have wrongly been told "there is no audience", or "who cares about female fighters". Yes we know, deeply irritating.  We care, as do thousands of others.

What can we take away from all of these shares?  Well, of course, we really want the campaign to reach the financial goal so we can steam roll into putting on the kind of shows that should be getting put on. However, your shares alone are more important than may be apparent from the outside.  If, the campaign is unsuccessful, then we will still be armed with that number of social media shares. This is proof that can be shown to sponsors and investors. Nobody cares if we say "we speak to hundreds of athletes and supporters", or "we get tens of thousands of website visits a month". Sponsors and investors just don't believe it... well thanks you to, we now have proof and we believe that this can only be seen as a huge positive.  Thank you everyone!!!

Click here to be taken to our kickstarter page