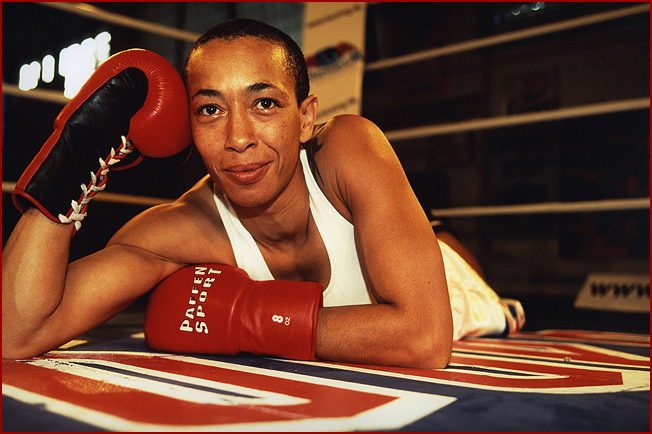 An interview with pioneer
Michele Aboro – Part One

In Awakening’s eyes Michele Aboro (London, England) is female martial arts royalty, a true pioneer of female combat sports. Finding an opponent in today’s world has definitely become easier, but still has its challenges. During Michele’s career, which spanned from 1990 – 2002, she would have faced incredible challenges as a female fighter. We often hear the term “paved the way for future generations”, never has this phrase been more apt than when used in conjunction with the name Michele Aboro.

By the end of her career she remained unbeaten in Boxing at 21-0-0, had an impressive Kickboxing and Muay Thai record of 32-2-1, and she even competed in an MMA bout in 1995! Unsurprisingly, she became a World Champion in three different disciplines, and won Pound-for-Pound Best Female Boxer of the Year four times!

Last but not least (Michele is unaware of this until now), when Awakening was born in 2012 and we first started inputting data on athletes past and present, one fighter made it apparent that we needed a find a way to highlight those rare extraordinary athletes that have made a significant impact on the growth of female combat sports. This was when the Awakening Outstanding Contribution Award (AOCA) was born, and Michele Aboro was the very first athlete to be awarded the accolade.

As you might be able to tell, it is our absolute honour to get this interview. Michele’s answers have been so interesting and full, that we have split this into four epic parts!

Awakening: Hi Michele, huge thanks to you for taking time to speak with us!

Michele: Thanks, it’s a great honour to be asked by Awakening for this interview. I’ve always found what you guys are doing for females in the fighting sports around the world absolutely outstanding. I take my hat off to you guys. And to be part of the Awakening Outstanding Contribution Award, I’m more than honoured to be chosen to be ranked so highly in this!

Awakening: You’re welcome! Before we find out what you’re up to now, we’d love to take this opportunity to find out a little more about you and your career!

Tell us how you were first introduced to martial arts, and how your career began?

Michele: I was introduced to martial arts at the age of 13 where I took up Kaichou-Kai Karate. I practiced for about 2 years and then slowly went back to doing motor cross, BMX riding and skateboarding. Two friends of mine; Julian and Andre Howell slowing coaxed me into doing this “kickboxing”, and I didn’t have a clue what it was about – this was late 80’s early 90’s. It was a trainer called Lincoln Boney from Brixton, who used to teach out of a place called Ferndale sport centre, which was basically a tennis field, a running track and a room with one bag in it. So I started off training there with him a Kickboxing / Su Tan Do style. He was a wonderful mentor to me, he really, really gave me my base for what grew into a total love of the sport. He mentored me through all of my fights up until my last world title fight before going to Holland. He was a great guy, a lot of experience, a very smart individual – same as the guys that actually fought for him – it was a great club to be a part of you know, it was a revolutionary club. There had been nothing like it before in London, so we were really the foreground of kickboxing and muay thai in London.

In the early days when I first started fighting, in the late 80’s it must be when I had my first amateur fights. You really wasn’t taken too seriously, but later on when I started coming through the ranks that started to change, because in my second year of training I had already fought Ann Holmes, Lisa Howarth and Lucia Rijker. Within two years I’d fought the best female boxers in the world. So promoters started to take me seriously.

After I fought Lucia in Oldham, I got asked by Johan Vos to go to Holland and start training with them, which was a great honour for me. At that moment in time – ‘91 / ‘92, Holland was leading the world when it came to Dutch style kickboxing, well they still are. So it was a great opportunity for me to grow in my sport.

I went over there to prepare for fights and would come back to England. In ‘93 I moved to Holland and started fighting for SportHall Johan Vos full time. Around about ‘95 / ‘96, I started to be trained by Jan Plas from Mejiro Gym at that time. So I had two of the best trainers in the world at that time training me. I was really lucky to be able to train with these guys. They brought me through to several world championships. Lincoln helped me to achieve two world championships while I was with him, and Johan helped me to win K1, ISKA, WKA and World Muay Thai world championship before actually going to Germany to sign a contract with Universum Box Promotion and become a pro boxer, which was in ’96.

I was still in Holland, and still doing kickboxing but I was going backward and forwards to Germany and training there, and competing on the pro scene in Germany. It was around 1997 that I went full time, and was just boxing - which for me was a dream come true because I didn’t have to worry about working, I could just concentrate on my sport which was the first time since I started competing in kickboxing or boxing.

I was based in Hamburg and Berlin while in Germany, but I always kept a base in Holland. So after every training camp and fight I would go back to Holland, and would basically spend my - as you call “living life” in Holland, and fighting life as a pro boxer in Germany.

Awakening: You’re well-known for your incredible undefeated boxing career, but earlier on you also had remarkable success as a World Champion in Kickboxing and Muay Thai. How did you balance careers in multiple disciplines at such a high level?

Michele: Most people know me from my undefeated boxing career, but not many people know of me as being a “British boxer” as well my earlier years when I first started in kickboxing and muay thai. I always loved boxing I must say, but during that time in England when I was competing it just wasn’t accessible for women to box or even possess a professional boxing license. This actually pushed me through to take up kickboxing with Lincoln Boney. It was when I went over to Holland I started to push more into actually competing in boxing. When I lived in England I trained in boxing. I always trained in boxing because I felt it gave me an extra edge in Kickboxing.

Awakening: Yes, that and being a natural no doubt!

Training for today’s athletes is very different, and many of our readers may not have been born when you first started training in the early nineties. Can you tell us about the difficulties and prejudices you faced in those early years? ...and of course, how you dealt with it?

Michele: When I started training, we didn’t have the means and the “technology” should I say, for training. A lot of the trainers were actually new to the sport, so they kind of made it up as they went along. We didn’t have the resources that people have today, or the sponsorship for people to be able to just train. I had a full time job up until I got a boxing career so I was always working on the side when I was kickboxing and moved to Holland and fought under the banner of Johan Vos and Jan Plas.

When I first started I remember Flexman in Brixton was the first place I trained and all we had was a tennis court, a running track and wooden floored space, a tiny weight training room and one kick bag, that was all we had, and we had each other. So we sparred a lot, and we ran a lot, and we played tennis a lot. This enabled us to actually get to the level we did, Vipers had not only me, but several very good international and national fighters that came out of there, you know it’s not about what you have, it’s about what you DO with what you have. If you have the zest, the life and the want to become good in what you do, you’ll be able to turn things around for the better.

When it came to prejudice, I think it’s still a thing that affects a lot of female fighters today. A lot of people do not look at fighting and females in the same light, but you just need to get on with what you’re doing and not let anyone’s prejudices come against you. If you look at me, I am mixed race, I am gay, and when I was fighting it was a time when women were not really fighting and were not taken serious as fighters. I can always remember in Germany, one time there was a guy he turned round and said… “you know, uuuuuuuuuh she fights just like a man, uuuuuuuuh, she’s too good to fight other women”. Which is a crazy statement to actually say you know, that I fight like a man because I’m good at what I do? Because I’m good at what I do, I’m a man? Which is ludicrous. I think there will always be people who think you shouldn’t be doing what you’re doing, there will always be difficult moments, there will always be people being very prejudice against you.. and you just have to carry on and look at the end goal, see what you want to do and keep your eyes on the prize!

…and when it came to fight nights, how did the treatment of female athletes differ to today’s promotions?

When it came to Boxing I was treated really, really well. My fights were shown on ZDF and I think for that time, Universum Box Promotion was really the only big boxing promotion that was taking female boxers seriously, the rest of the world were promoting them on a really, really small scale or not promoting female boxers at all, so I was very lucky to get in that door and to get a contract there. Back in England, I couldn’t even get put on a promotion, I couldn’t even get a professional boxing licence. Things have changed now, it would be great if it was like it is now back when I started, I would have been able to fight in my home town, which I would have loved to have done! But it was what it was and Germany gave me the chance to be able to fight as a pro boxer, and Holland gave me the chance to fight as a pro kickboxer.

In Part Two of this Michele Aboro interview we take a nostalgic look at her career and also ask about her controversial retirement and prejudice.