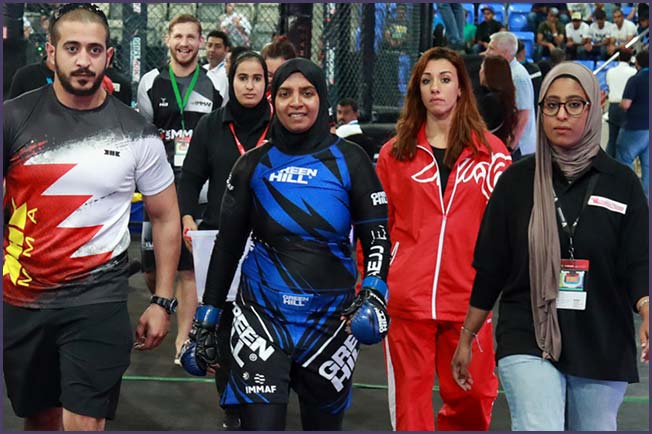 Bahraini supporters turned out in droves, and the near-deafening applause for the débutantes created an electric atmosphere in the Khalifa Sports City arena, which played host to the International Mixed Martial Arts Federation’s five-day, nation vs nation, amateur MMA tournament.

Bureshaid also became the first Bahraini female to be awarded an IMMAF medal and the first to wear a hijab in IMMAF competition.

Fatema Bureshaid had travelled directly from the World Police Games in Abu Dhabi, where she had earned 4th place in Brazilian jiu jitsu, to lose to the UK’s Kaycee Blake in the IMMAF semi-finals. She was awarded a bronze medal for Bahrain in the Women’s Lightweight division.

Hend Rezk represented Bahrain in the Women’s Strawweight category to be defeated by Ayan Tursyn of Kazakhstan in the quarter-finals.

“I feel very happy and I’m proud of all the people that came to support me because they wanted Bahraini women to join this competition…. I came here to compete because I want to represent women in MMA and I want people to be proud of Bahraini women, that we can enter the competition and compete without feeling any fear.”

Nishigandha Rao beat Daria Sloviashchenkova of Russia to progress to the quarter finals, where she faced defeat at the hands of past IMMAF World and European silver medallist, Anette Österberg, who ultimately took the bronze medal.

Written and submitted by: Isobel Carnwath